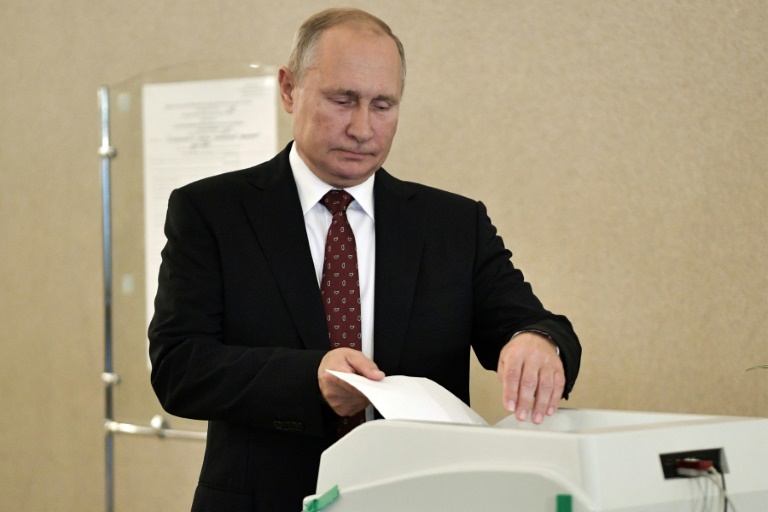 Russians voted Sunday in local elections after weeks of opposition protests in Moscow that led to the biggest police crackdown on dissent in nearly a decade.

Municipal and regional polls were held across the country, but attention focused on the Moscow parliament vote following the arrest and jailing of independent would-be candidates and their supporters.

Opposition leader Alexei Navalny, whose allies were barred from running, urged voters to punish the Kremlin and support those with the best chance of beating members of the ruling party United Russia — mostly Communists.

Navalny has urged residents of other cities to vote strategically.

“This is our first experience of organized collective action,” he wrote on election eve.

They will also be seen as a test of 43-year-old Navalny’s ability to mobilize Kremlin critics ahead of parliamentary elections in 2021.

Authorities responded with a police crackdown — the biggest since a wave of protests in 2011-12 against Putin’s return to the Kremlin after a stint as prime minister.

Authorities briefly jailed nearly all opposition politicians seeking to get on the ballot in Moscow.

Several people were also imprisoned for alleged violence against police.

Putin voted in the Moscow election and his motorcade was seen travelling through deserted streets.

Asked if he wanted to see more candidates on the ballot, the Kremlin chief said it was the “quality” that mattered, not the quantity.

‘I cannot get over it’

Many disagreed, saying opposition candidates should have been allowed to run.

Lyubov Sobol, a lawyer for Navalny’s Anti-Corruption Fund who was barred from running, said the current elections had lost the last veneer of legitimacy.

“Of course no one wants to go to the polls,” the 31-year-old, who has emerged as the brightest star in a new generation of political challengers, told reporters.

Alyona Prokhorova, a 46-year-old mother of four, said she was so shocked by the clampdown that she signed up to be an election observer to monitor for possible irregularities.

“Moscow is against this hideousness,” she told AFP at a polling station in the city’s southwest.

“I still cannot get over it.”

Prokhorova said she backed Navalny’s strategic voting plan and her 18-year-old daughter would also cast ballot for the candidate he suggested.

Alexander Mayorov, 69, said he always voted for communists, adding that “most” members of the ruling party United Russia “look out for their own interests.” He said he was also sceptical about Navalny.

“The Moscow parliament elections have become a litmus test of the authorities’ ability to accept this new reality,” Stanovaya told AFP.

Some 7.3 million people are eligible to elect 45 lawmakers in the Moscow parliament, which is dominated by the ruling party.

But not a single candidate is formally running on the United Russia ticket as the party’s popularity hits rock bottom.

Political observer Kirill Rogov said it was important to see if protest voting spreads to the regions.

“Politics in Russia concentrates in big cities,” he said, stressing the importance of elections in Saint Petersburg and the Far Eastern city of Khabarovsk, among others.

Russians were electing governors in 16 regions and elections to legislative assemblies were taking place in 13 regions.

The race for the governor’s seat in Saint Petersburg has become the most controversial campaign outside Moscow, with the Kremlin backing the unpopular gaffe-prone acting city chief Alexander Beglov.

Opposition newspaper Novaya Gazeta reported this week that some election officials in Putin’s hometown had been trained to enter fraudulent votes into ballot boxes “at the last minute”.

The chief of the central election commission, Ella Pamfilova, has insisted that the elections would be fair.

“It’s unacceptable when they try to discredit our work,” she added.

Polling stations in Moscow opened at 0500 GMT and will close 12 hours later.