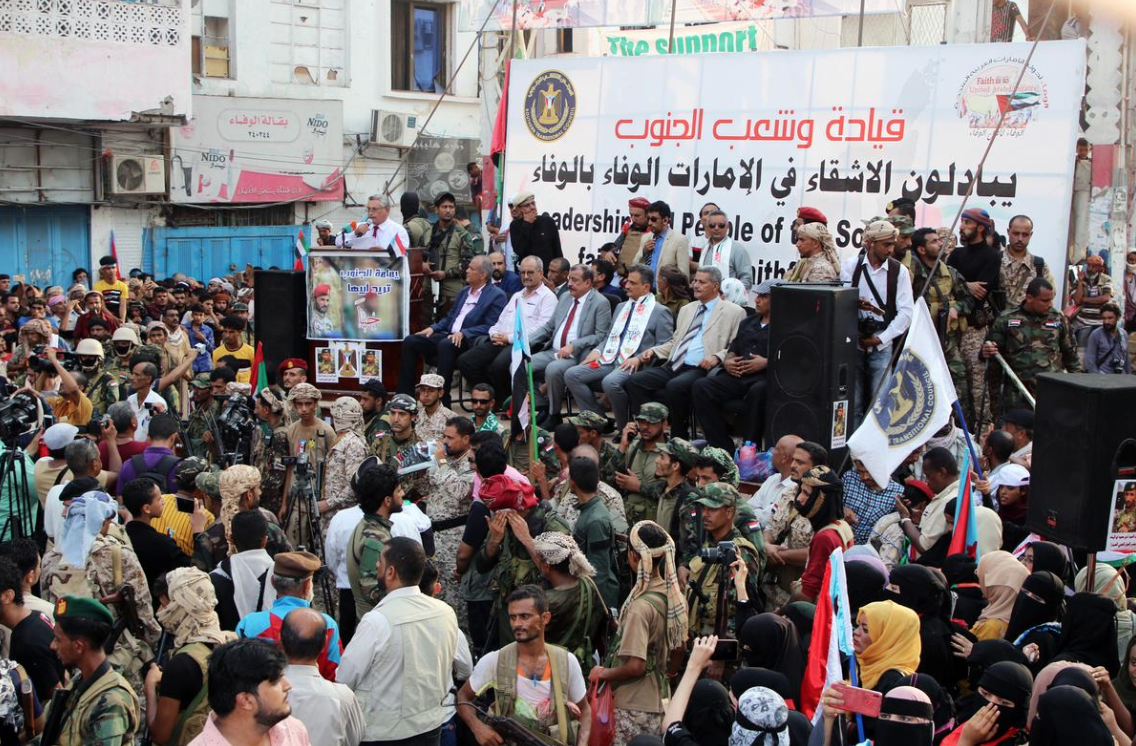 RIYADH/ADEN (Reuters) – Saudi Arabia called on southern Yemeni separatists on Thursday to cede control of Aden and voiced its support for the government, an indication that its rift with close ally United Arab Emirates had deepened.

In a statement carried by the state news agency SPA, the kingdom refused any “new reality” imposed by force in the south and added any attempt to destabilize Yemen’s security would be a threat against the Kingdom and “will be dealt with decisively”.

Saudi Arabia, leader of an Arab coalition battling Yemen’s Iran-aligned Houthis, is hosting indirect talks to resolve the crisis between the UAE-backed separatists and officials of the government of President Abd-Rabbu Mansour Hadi, which has opened a new front in Yemen’s war.

The breakaway movement is part of the coalition that intervened in Yemen in March 2015 to try to restore Hadi’s government which was ousted from power by the Houthis in the capital Sanaa in late 2014.

But the separatists seek independence and turned on the government in early August and captured Aden, its interim base. Southern fighters have clashed with government forces elsewhere in the south as they tried to extend their reach.

On Thursday, they organized a rally in Aden where thousands of Yemenis gathered in support of the UAE, which backs separatists who seized the southern city from the Saudi-backed government in a power struggle that has strained Riyadh’s alliance with its main regional partner the UAE.

March organizers said they wanted to show loyalty to the UAE, the second power in the coalition, which openly intervened to support the separatists by launching air strikes on government forces last week when they tried to recapture Aden, forcing them to withdraw.

“This is the least we can do for the UAE which has given everything to the people of South Yemen,” said Hashem al-Morshidi, one of the demonstrators.

Others carried banners expressing loyalty to the UAE or portraits of Abu Dhabi’s leaders as large speakers blared Emirati music.

Hadi’s government has publicly asked the UAE to stop supporting separatist forces. Abu Dhabi has responded by criticizing his government as weak and ineffective.

The fight for Yemen’s south threatens to further fragment the Arabian Peninsula nation and hamper United Nations efforts to end the conflict that has killed tens of thousands and pushed millions toward famine.

Saudi Arabia called on both sides to refocus on battling the Houthis, who hold Sanaa and most major urban centers. It has held indirect talks between STC leaders and Yemeni government officials for that purpose in the Red Sea port city of Jeddah this week.

Hadi’s government has said it would not participate in a summit unless the STC hands back Aden.

“We will not sit with the so-called STC at the table,” Interior Minister Ahmed al-Mayssari said in an audio recording shared by government officials on Wednesday.

“If there must be dialogue it should be with the UAE … it is the main party behind this conflict between us and the STC is only a political tool in their hands.”

The UAE in June scaled down its military presence in Yemen but maintains influence via tens of thousands of southern separatist fighters it has armed and trained.

Abu Dhabi, which has called for a political solution to the standoff, said on Wednesday it was confident the Jeddah meeting would succeed. Yemeni sources have said that a summit could reshuffle Hadi’s government to include the STC.

Photo: Yemeni southern separatist leaders sit during a rally in support to the United Arab Emirates amid a standoff with the Saudi-backed government, in the port city of Aden, Yemen September 5, 2019. REUTERS/Fawaz Salman