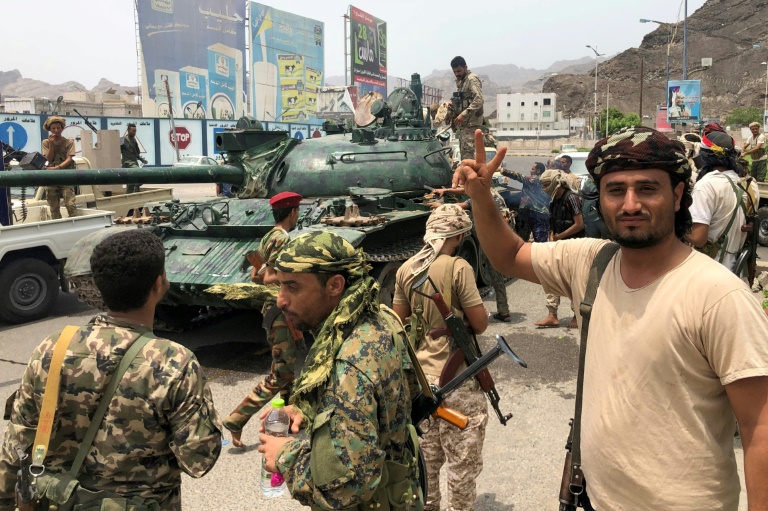 An alliance of Sunni Arab states led by Riyadh has fractured after more than four years fighting on behalf of an ousted Yemeni government against the Iran-aligned, Shi’ite-led Houthi movement that controls the capital and most populous areas.

In recent days, the southern separatists, who have been armed and trained by the UAE, have cast off an alliance with the Saudi-backed government and seized control of much of the southern port of Aden, the government’s main base.

The United Arab Emirates, Saudi Arabia’s main military ally in the conflict on the ground for most of the war, has drawn down its forces in the coalition since June.

The separatist leader, Southern Transitional Council President Aidaroos al-Zubaidi, said his group still supports the coalition against the Houthis and would attend a proposed emergency summit in Saudi Arabia.

But he did not commit to withdrawing his forces from government buildings they seized on Saturday after clashes that killed 40 people including civilians.

Riyadh made clear it still backs the government, led by exiled President Abd-Rabbu Mansour Hadi, who has mainly lived in Saudi Arabia since fleeing Yemen’s capital in 2014.

The coalition, still led by Saudi Arabia and still formally including the UAE, said it hit a separatist area on Sunday and vowed to carry out more attacks if the southerners did not withdraw.

Residents said fighting has ended since the separatists seized government military bases and surrounded the nearly empty presidential palace in Aden on Saturday.

“It is quiet now but people are still worried. We don’t know where matters are heading,” Aden resident Adel Mohammed told Reuters on Monday. He said power and water supplies had been restored, but could be disrupted again if the crisis continues.

Local media quoted an official at Aden’s airport as saying flights had resumed on Sunday.

“We were left with two options: defend ourselves or surrender to the eradication of our just cause and souls,” Zubaidi said in a statement from Aden late on Sunday.

The rift in the coalition complicates U.N. efforts to implement a stalled peace deal in the main port city of Hodeidah to pave the way for broader political talks to end the war. The southern separatists and UAE forces played a major role on the ground in a coalition attempt to seize Hodeidah and cut off supply lines to Houthi-held areas.

The four-and-a-half-year-old war has killed tens of thousands people and pushed Yemen to the brink of famine.

The UAE has armed and trained thousands of southern fighters who answer to Zubaidi, a militia leader who emerged from relative obscurity in late 2015 after helping purge the Houthis from Aden.

Violence has escalated in other parts of Yemen after the Houthis stepped up missile and drone attacks on Saudi cities.

The coalition said it attacked Houthi targets in the northern Hajjah province on Sunday that the movement’s al-Masirah TV said killed 11 civilians. The alliance said it was investigating civilian deaths in the air strikes.

Reporting by Reuters team in Aden, Alaa Swilam and Samar Hassan in Cairo and Sylvia Westall in Dubai; Writing by Ghaida Ghantous; Editing by Peter Graff

Photo: Yemeni supporters of the southern separatist movement pose for a picture with a tank they confiscated from a military barracks in Aden where they have been fighting other forces loyal to the internationally recognised government