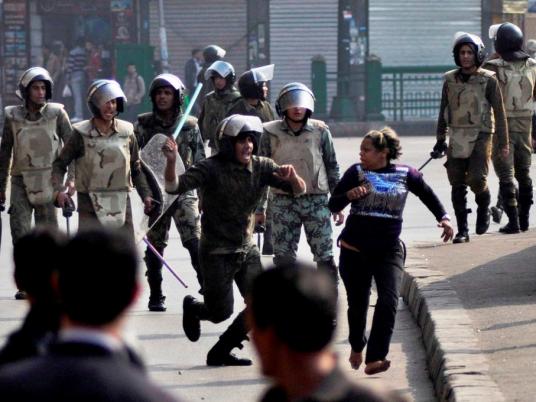 The plan will employ various techniques against those perceived to be violating the law, including the use of batons, loud speakers to make announcements warning against misconduct, and colored chemicals that will stain one’s skin for six months. The latter is meant to mark individuals disrupting the peace, according to the sources, who spoke on condition of anonymity.

As a last resort, the plan allows for the use of live ammunition in the event that vital institutions are attacked, the sources added. The plan stipulates that live fire must be aimed at the feet.

In December, the SCAF warned of a secret plot to destroy the state on 25 January. Experts have dismissed the claim as an attempt to scare demonstrators demanding an end to military rule.

Azza Karim, professor of sociology at the National Center for Social and Criminal Studies, told Al-Masry Al-Youm in December that the military council is responsible for the ongoing wave of protests.

“The military council failed to achieve the demands of the revolution,” she said, urging the council to hand over power to civilian authorities as soon as possible.

On 9 January, 54 political parties and movements called for country-wide protests on 25 January to demand a swift transfer of power from military to civilian authorities.

Sources close to the Muslim Brotherhood said on Tuesday that the group withdrew recently from talks with other political forces and revolutionary groups over coordinated participation in the celebrations.

However, the sources said that beginning on 24 January, the group will form public committees to secure entrances and exits to Tahrir Square and prevent any clashes.

Other political forces announced their participation in anniversary celebrations. Jama’a al-Islamiya said it will not only take part in the celebrations but also in securing demonstrations if requested to do so.

The Salafi Nour Party said its high committee will meet with other political forces to discuss how it will participate.

The Salafi-oriented Asala Party said it would set up its own stage in Tahrir Square and invite Salafi leaders to take part in the celebrations.

Member of the higher council for Sufi orders, councilor Malik Elwan, said the Sufis would decide during a meeting on Wednesday whether they will participate.