Facebook Twitter LinkedIn
The so-far fruitless search for a missing Malaysian airliner entered its fourth day on Tuesday, as sources in Europe, the United States and Asia voiced growing scepticism that the flight lost with 239 people on board was the target of an attack.
The massive search has drawn in navies, military aircraft, coastguard and civilian vessels from 10 nations, but failed to turn up any trace of the Boeing 777-200ER that vanished about an hour into a flight from Kuala Lumpur to Beijing early on Saturday.
"Until now, with all of our efforts, there is very little hope for any good news about this plane," said the head of Vietnam's search and rescue effort, Pham Quy Tieu.
The search was widened on Tuesday to a larger swathe of the Gulf of Thailand and the South China Sea, around where the plane lost radio contact and vanished from radar screens.
But searches were also being conducted on the western coast of Malaysia and up northwest towards the Andaman Sea – based on a theory that the plane may have flown on for some time after deviating from its flight path.
Even that information has not been clearly confirmed, and investigators and intelligence sources say the fate of Malaysia Airlines flight MH370 is still shrouded in mystery.
Interpol said on Sunday at least two passengers on board had used stolen passports, raising suspicions of foul play. But Southeast Asia is known as a hub for false documents that are also used by smugglers, illegal migrants and asylum seekers.
Police in Thailand, where the passports were stolen and the tickets used by the two men carrying them were booked, said on Tuesday they did not think they were linked to the disappearance of the plane.
"We haven't ruled it out, but the weight of evidence we're getting swings against the idea that these men are or were involved in terrorism," Supachai Puikaewcome, chief of police in the Thai resort city of Pattaya, told Reuters.
Hijack not ruled out
Neither Malaysia's Special Branch, the agency leading the investigation, nor spy agencies in the United States and Europe, have ruled out the possibility of a hijack or bombing.
But Malaysian authorities have indicated the evidence so far does not strongly back an attack as a cause for the aircraft's disappearance, and that mechanical or pilot problems could have led to the apparent crash, US government sources said.
"There is no evidence to suggest an act of terror," said a European security source, who added that there was also "no explanation what's happened to it or where it is".
The United States extensively reviewed imagery taken by spy satellites for evidence of a mid-air explosion, but saw none, a US government source said.
Nothing found
"Unfortunately we have not found anything that appears to be objects from the aircraft, let alone the aircraft," Azharuddin Abdul Rahman, the head of Malaysia's Civil Aviation Authority And the chief investigator, said on Monday.
"As far as we are concerned, we have to find the aircraft. We have to find a piece of the aircraft if possible."
Azharuddin said a hijacking attempt could not be ruled out as investigators explore all theories.
He also said the two men with stolen passports did not appear to be of Asian origin, but did not elaborate. Airport CCTV footage showed they completed all security procedures, he said.
"We are looking at the possibility of a stolen passport syndicate," he said.
Vietnam said it was allowing ships and planes from Malaysia, Singapore, China and the United States to enter its waters to search for the plane.
Five ships and two aircraft were investigating a report of "large metal debris" spotted off southern Vietnam by a Cathay Pacific plane en route to Kuala Lumpur from Hong Kong, but had not been able to confirm any wreckage, authorities said.
About two-thirds of the 227 passengers and 12 crew now presumed to have died aboard the plane were Chinese. Other nationalities included 38 Malaysians, seven Indonesians, six Australians, five Indians, four French and three Americans.
China has deployed 10 satellites using high-resolution earth imaging capabilities, visible light imaging and other technologies to "support and assist in the search and rescue operations", the People's Liberation Army Daily said on Tuesday.
Superior safety record
The Boeing 777 has one of the best safety records of any commercial aircraft in service. Its only previous fatal crash came on 6 July last year when Asiana Airlines Flight 214 struck a seawall on landing in San Francisco, killing three people.
US planemaker has Boeing declined to comment beyond a brief statement saying it was monitoring the situation.
No distress signal was sent from the lost plane, which experts said suggested a sudden catastrophic failure or explosion, but Malaysia's air force chief said radar tracking showed it may have turned back from its scheduled route before it disappeared.
The passenger manifest issued by the airline included the names of two Europeans who were not on the plane. Their passports had been stolen in Thailand during the past two years. Interpol said the use of stolen passports was "of great concern".
Thai police said the tickets had been booked in Pattaya, a raucous resort south of Bangkok, by two Iranian men whom they identified as "Hasem" and "Kazem Ali".
"We're looking into all angles including the possibility that these men were involved in human smuggling, as Mr Ali had a relationship with the travel agency and had booked through them previously, very possibly for Iranian nationals," Pattaya police chief Supachai said.
Tags
flight hijacking Malaysia plane 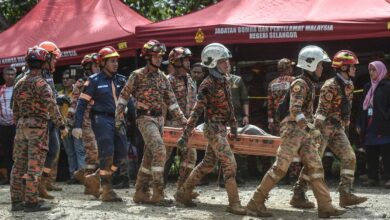 Death toll rises to 23 after landslide near campsite in Malaysia