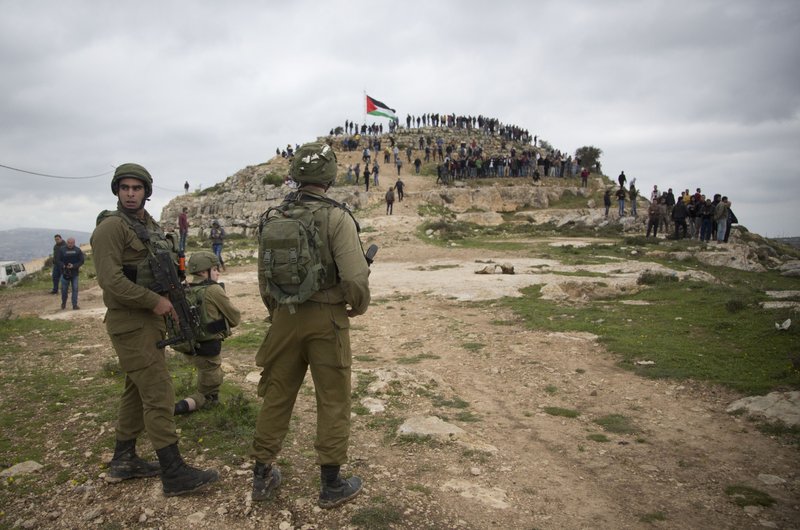 JERUSALEM (AP) — Now that Israeli Prime Minister Benjamin Netanyahu has secured a new term in office, there seems to be little to prevent him from annexing large parts of the occupied West Bank as early as this summer.

Netanyahu has a friendly ally in the White House and support in Israel’s new parliament for his long-promised goal. An expected visit by US Secretary of State Mike Pompeo next week could provide the first indications of his intentions.

For now, the Israeli leader appears set on moving forward. His new coalition agreement allows him to present an annexation proposal to the government as soon as July 1. In a speech last month, Netanyahu said he was confident he would be able to annex West Bank land this summer, with support from the US.

The Palestinians claim the entire West Bank, captured by Israel in the 1967 Mideast war, as the heartland of an independent state. Annexing chunks of this territory would likely deal a death blow to faded Palestinian hopes of a two-state solution. Annexation also would anger the international community, which overwhelmingly supports Palestinian statehood.

Fear of harsh international censure might help explain why Netanyahu hasn’t tried to annex occupied territory in his years in power — even while boosting Jewish settlement expansion there.

Those calculations gradually changed after Donald Trump was elected U.S. president in 2016. Surrounded by a team of pro-settlement advisers, Trump delivered diplomatic gifts that Netanyahu never could have imagined under previous administrations.

Trump’s Mideast plan envisions handing 30 percent of the West Bank, including Israel’s dozens of settlements, to permanent Israeli control, while conditionally offering the Palestinians limited statehood — with Israel retaining overall security control — in the remaining territory. The Palestinians have rejected the plan, and it has received little international support.

After the plan’s White House launch in January, Netanyahu said he would move ahead quickly with annexation plans, only to be reined in by the Trump administration, which said a joint committee should map out areas to be annexed.

With Netanyahu’s new government expected to be sworn in next week, both sides appear ready to move forward.

Trump’s ambassador to Israel, David Friedman, told the Israeli newspaper Israel Hayom this week that the U.S. is ready to recognize annexation in the coming weeks if Israel so chooses.

Oded Revivi, a leader of the Yesha settlers’ council, urged Netanyahu to take advantage of the narrow window of opportunity ahead of November’s presidential election. The presumptive Democratic nominee, Joe Biden, is unlikely to support annexation.

“I would like to see Israeli law being applied according to the Trump deal, in order to give it a chance,” Revivi said.

Annexation would offer benefits to both sides. Netanyahu could solidify his hard-line legacy and shore up support with his nationalist base. It also would give Trump a welcome accomplishment to rally pro-Israel supporters, particularly among politically powerful evangelical voters.

Palestinian President Mahmoud Abbas, who oversees autonomous enclaves in the West Bank, has warned he would annul past agreements with Israel in response to annexation. This could mean the collapse of Israeli-Palestinian security cooperation, a relationship valued by Israel as an added layer of protection against attacks by militants.

Annexation could also trigger a fundamental shift in Palestinian aspirations — from setting up an independent state in parts of the Holy Land to struggling for equal rights and full citizenship in a single state between the Jordan River and the Mediterranean.

Such a bi-national state would conflict with Israel’s founding ethos as a homeland for the Jewish people.

“Israel and the US will take full responsibility for the consequences if the annexation decision is implemented,” said Abbas spokesman Nabil Abu Rdeneh.

Hugh Lovatt, a policy fellow at the European Council on Foreign Relations, said he expected the EU and its member states “to go beyond mere condemnations” if annexation takes place.

He said it will be difficult to take unanimous action because of differences within the 27-member bloc but that individual states, led by France, could take action on their own.

Israeli annexation would also jeopardize Israel’s recent progress in normalizing ties with the Arab world, especially Persian Gulf states that have been open to Israeli overtures as they try to curb the influence of Iran, a regional power and shared foe.

On Tuesday, the state-run Saudi Press Agency, reporting on a Cabinet meeting chaired by King Salman, said the kingdom “stood steadfast by the side of the Palestinian people.”

Arab foreign ministers last week condemned Netanyahu’s plan as a “new war crime” and urged the U.S. not to back it, saying it “undermines any chances for peace in the region.”

The foreign ministers of Jordan and Egypt warned annexation would jeopardize Palestinian statehood. The two countries have peace deals and discreet security ties with Israel.

The Israeli coalition deal says the parties must take into account regional stability and existing peace agreements as they weigh annexation. That could lead Netanyahu’s main partner, the centrist Blue and White party, to withhold its support. On the other hand, far-right lawmakers, including members of the coalition, might ironically oppose annexation because they reject the Trump plan’s support for a watered-down Palestinian state.

Yohanan Plesner, president of the Israel Democracy Institute, said that with so many potential obstacles, he believes Netanyahu hasn’t made up his mind and might still call off annexation.

“It will very much depend on Mr. Netanyahu if he wants to raise it all,” he said.

Image: FILE – In this Monday, March 2, 2020 file photo, Israeli soldiers take position as Palestinian demonstrators gather during a protest against expansion of Israeli settlements, in the West Bank village of Beita near Nablus. Now that Prime Minister Benjamin Netanyahu has secured a new term in office, there’s little to prevent him from annexing large parts of the West Bank as early as this summer. Netanyahu has broad support in the new parliament and a friendly ally in the White House for his long-promised goal. Annexation, the likely death blow to faded Palestinian hopes for independence, will be high on the agenda of U.S. secretary of state Mike Pompeo’s blitz visit to Jerusalem next week. (AP Photo/Majdi Mohammed, File)