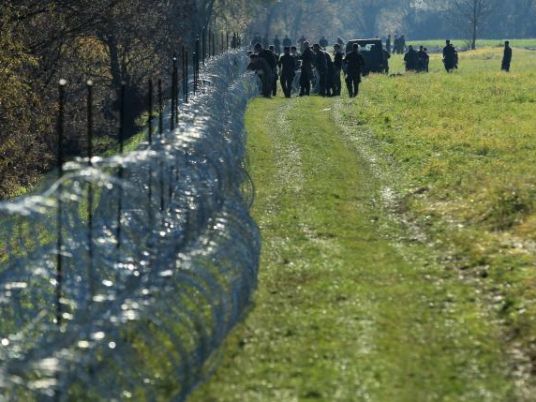 Slovenia started erecting a razor wire fence along parts of its border with Croatia amid heavy security on Wednesday, saying it wanted better control over the surge of migrants passing through as they make their way across Europe.
Around 180,000 people, many fleeing war in Syria and Afghanistan, have entered Slovenia since mid October, most of them heading north to Austria and then Germany.
Europe is facing a record influx of migrants and is deeply divided on how to act. European Union leaders are due to meet in Malta for a special migration summit later on Wednesday to try to iron out their differences.
Army trucks carrying wire fencing arrived in the border village of Veliki Obrez in southeastern Slovenia early on Wednesday. By 0630 ET, about 2 km (1.2 miles) of wire had been erected, a Reuters photographer there said.
The main point of disagreement in the EU is over mandatory national quotas to share out asylum seekers among the 28 member states. Hungary, which already closed its border to migrants in October, Czech Republic, Poland and Slovakia deeply oppose the quotas.
Slovenia is facing more immediate and pressing logistical concerns. Prime Minister Miro Cerar said on Tuesday that the country, the smallest on the migrant route, does not have the resources to shelter large numbers over the harsh winter if Austria shut its border.
Slovenia's border with Croatia will remain open, Cerar said, but the fence will prevent migrants to come into the country outside the border crossing.
Thousands waiting in Serbia
Slovenian soldiers also erected another 100 meters of wire fencing on an open field near the border village of Gibina in eastern Slovenia, a Reuters cameraman there said.
No migrants were present at either of the two places, but large numbers of soldiers and police were at both scenes, some guarding construction equipment.
Croatia on Wednesday said Slovenia's move was unnecessary and a waste of money.
"It would be better if they built a reception centers, similarly to what we did," Croatian Interior Minister Ranko Ostojic told reporters. "No wire can stop people to find their way and it is better to make their way organized."
Slovenia said this week it was not going to build any long term reception centers.
The UN refugee agency UNHCR said more than 3,000 people were waiting to enter a refugee camp at Presevo in southern Serbia, from where they will probably make their way to Croatia and then Slovenia.
Another 3,000 people were expected to enter Serbia on Wednesday, after 9,000 arrived a day earlier, a UNHCR field officer in Presevo said.
About 175 policemen from other EU states have come to Slovenia to bolster the local force. Another 100 are expected in the next two weeks.