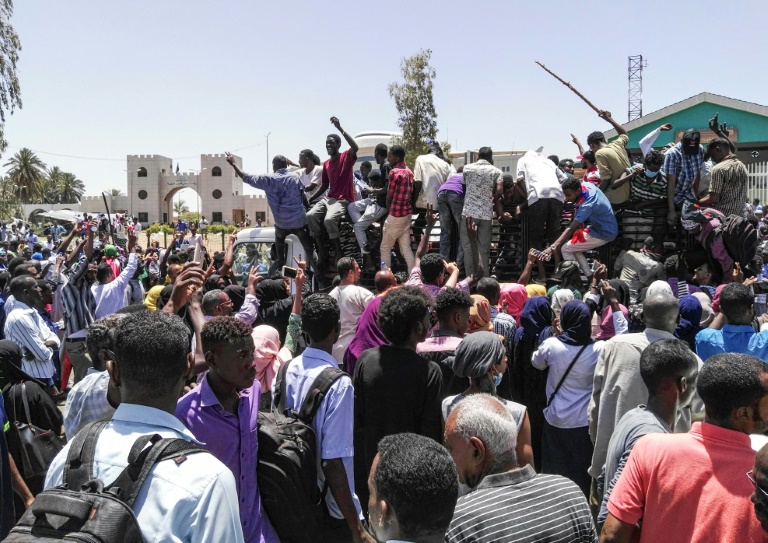 Thousands of defiant Sudanese protesters remained camped outside army headquarters for a fourth day Tuesday, buoyed by the abandonment of a pre-dawn attempt to disperse them after soldiers intervened, witnesses said.

Chanting “freedom, freedom,” crowds of men and women, who had spent the night camped outside sprawling the Khartoum complex that also houses the president’s residence, urged top brass to back them in ending Omar al-Bashir’s three decades of iron-fisted tule.

It is the largest rally since protests erupted following a three-fold increase in bread prices in December, before mushrooming into nationwide demonstrations demanding that Bashir and his government step down.

Early on Tuesday, members of the National Intelligence and Security Service and riot police fired tear gas at the protesters in an abortive bid to disperse their sit-in, protest movement organizers said.

“There was heavy firing of tear gas after which army soldiers opened the gates of the compound for protesters to enter,” a witness told AFP.

“A few minutes later a group of soldiers fired gunshots in the air to push back the security forces who were firing tear gas.”

A second witness too said soldiers had intervened against the security force agents.

Since the protests erupted in December, the armed forces have remained on the sidelines even as security agents and riot police have cracked down.

Demonstrators have called on the army to protect them from the deadly crackdown, during their four days camped outside its headquarters.

An AFP correspondent, some five kilometers (three miles) away, heard shooting for about four minutes.

Later a group of soldiers returned to the complex with a body in their pick-up truck, witnesses said.

“What is the price of martyrs?” shouted the demonstrators as the vehicle entered. It was not immediately clear whose body it was.

‘Wish of the revolution’

Defense Minister General Awad Ibnouf vowed that the army would prevent any slide into chaos.

“Sudan’s armed forces understand the reasons for the demonstrations and is not against the demands and aspirations of the citizens, but it will not allow the country to fall into chaos,” Ibnouf said on Monday, according to the official SUNA news agency.

In a separate statement, army chief of staff Kamal Abdelmarouf said the military was “discharging its responsibility in securing and protecting citizens.”

Officials say 38 people have died in protest-related violence since December.

Interior Minister Bushara Juma said seven protesters died and 15 were wounded on Saturday when forces tried to disperse them.

He said 42 security personnel were injured and 2,496 arrests made.

The umbrella group spearheading the protests appealed to the army on Monday for talks on forming a transitional government.

“We call on the Sudanese armed forces to talk directly with the Alliance for Freedom and Change for facilitating the peaceful process of forming a transitional government,” said Omar el-Digeir, a senior member of the group.

Digeir said the protest organizers had formed a council to open talks aimed at agreeing a “transitional government that represents the wish of the revolution.”

Reading from a statement, he also called on the armed forces “to withdraw their support for a regime that has lost its legitimacy” and to support the “people’s alternative for a transition to a civilian democratic government.”

The rally outside the army headquarters has been the largest since protests began on December 19 in the central town of Atbara, quickly spreading to the capital and nationwide.

The European Union said an “unprecedented” number of people had come out calling for change since Saturday.

“The people of Sudan have shown remarkable resilience in the face of extraordinary obstacles over many years,” the EU’s External Action Service said.

“Their trust must be won through concrete action by the government.”

The protesters accuse Bashir’s administration of economic mismanagement that has led to soaring food prices and chronic shortages of fuel and foreign currency.

After a meeting chaired by Bashir on Sunday, Sudan’s security council said the demands of the protesters “have to be heard.”

Bashir, wanted by the Hague-based International Criminal Court on charges of war crimes and genocide connected with the suppression of a now 16-year-old ethnic minority rebellion in the western region of Darfur, took power in an Islamist-backed coup in 1989.