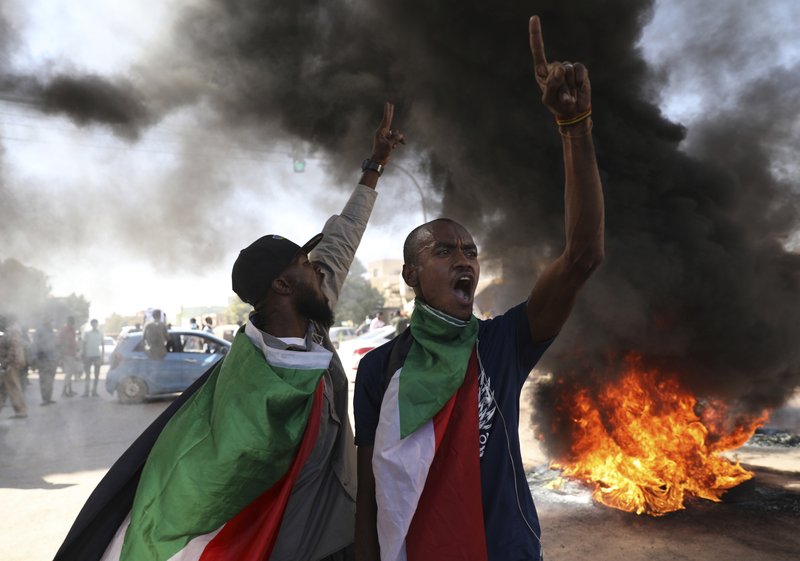 CAIRO (AP) — Dozens of Sudanese rallied in the capital, Khartoum, on Thursday to demand the closure of illegal detention centers following the alleged torturing and killing of a man by a paramilitary force whose members once formed the backbone of a militia accused of war crimes in Darfur.

The death of Bahaa el-Din Nouri, snatched last month while sitting at a coffee shop last month, has reignited debate over the mandate of Sudan’s Rapid Support Forces, which activists have long held responsible for several human rights violations.

Men and women held up Nouri’s photographs, forming a human chain in downtown Khartoum from the office of Sudan’s general prosecutor to the Cabinet. Many protesters also raised banners reading: “No to enforced disappearances.”

The rally was called for by the Sudanese Professionals’ Association, which spearheaded the popular uprising that led to the ouster of longtime autocrat Omar al-Bashir in April 2019.

Ammar al-Baqer, a member of the association, said the protest aims to reiterate his group’s demands that “all illegal detention centers” be closed and that only the Sudanese police retain the right to detain people “according to due process.”

Nouri was taken on December 16 from the Kalakla neighborhood in southern Khartoum by men in plainclothes riding in a vehicle without license plates, his family has said. His body showed up five days later at a hospital morgue. The family refused to take it for immediate burial after seeing signs of apparent beating and torture, according to Nouri’s brother, Yasser.

Culture and Information Minister Faisal Mohammed Saleh, who is also the government spokesman, said an initial investigation showed Nouri died during interrogation by the Rapid Support Forces. The force’s spokesman, Gen. Gamal Goma, said the intelligence chief and officers involved in Nouri’s detention and interrogation have been suspended or detained, pending an investigation into his death.

“We, as lawyers, hope that people can stand together along with the police and the army against detentions and extra-judicial killings,” said Ghada Abbas Ahmed, a lawyer who took part in the protest.

The Rapid Support Forces is largely comprised of former Janjaweed militiamen who have carried out a brutal crackdown in Sudan’s Darfur region under al-Bashir. Rights groups have accused the Janjaweed of committing war crimes, including raping and killing civilians and burning down villages.

The force is led by powerful Sudanese Gen. Mohammed Hamdan Dagalo, who is also the deputy head of the ruling sovereign council. In response of Nouri’s death, Daglo said that he had removed immunity for all suspected force members to allow for an unhindered investigation.

Since al-Bashir’s ouster, Dagalo has emerged as Sudan’s main powerbroker, with his forces deployed in areas across the capital and other main cities. Sudan is currently led by a joint military-civilian government.

Thursday’s protest comes against the backdrop of brewing tension between the military and civilian members of Sudan’s transitional government. Tensions have largely centered on the Sudanese military’s economic assets, over which the civilian-run finance ministry does not have control.

The government has been struggling with a huge budget deficit and widespread shortages of essential goods, including fuel, bread and medicines. Annual inflation has soared past 200% in the past months as prices of bread and other staples surged.

Separately, Lt. Gen. Shams el-Din Kabashi, a member of Sudan’s ruling sovereign council met Thursday in Cairo with Egypt’s President Abdel Fattah el-Sissi as both countries face strained relations with Ethiopia over its building of a controversial dam on the Blue Nile.

El-Sissi and Kabashi agreed to “continue their coordinated efforts” to resolve the dispute amd also discussed the situation along the Sudanese-Ethiopian borders, which have recently witnessed sporadic military confrontations between the two neighboring countries.

In the past two months, Sudan’s military has deployed troops to the border areas with Ethiopia and said it reclaimed territories for years controlled by Ethiopian militias and farmers. This development came on the heels of the eruption of a civil war in neighboring Ethiopia where government forces have been fighting local forces in the Tigray region since early November.

The conflict spilled over the border into Sudan last month. At least five Sudanese women and a child were killed in an attack Monday inside Sudan by Ethiopian militias, the Sudanese foreign ministry said.

The Tigray fighting has also sent over 60,000 Ethiopian refugees into Sudan, mostly into al-Qadarif.

IMAGE: A demonstrator gives the victory sign during a protest, in Khartoum, Sudan, Saturday, December 19, 2020. Protests in Sudan’s capital and across the country are demanding a faster pace to democratic reforms, in demonstrations that are marking the two-year anniversary of the uprising that led to the military’s ouster of strongman Omar al-Bashir. (AP Photo/Marwan Ali)

Sudan signs pact with US on normalizing ties with Israel