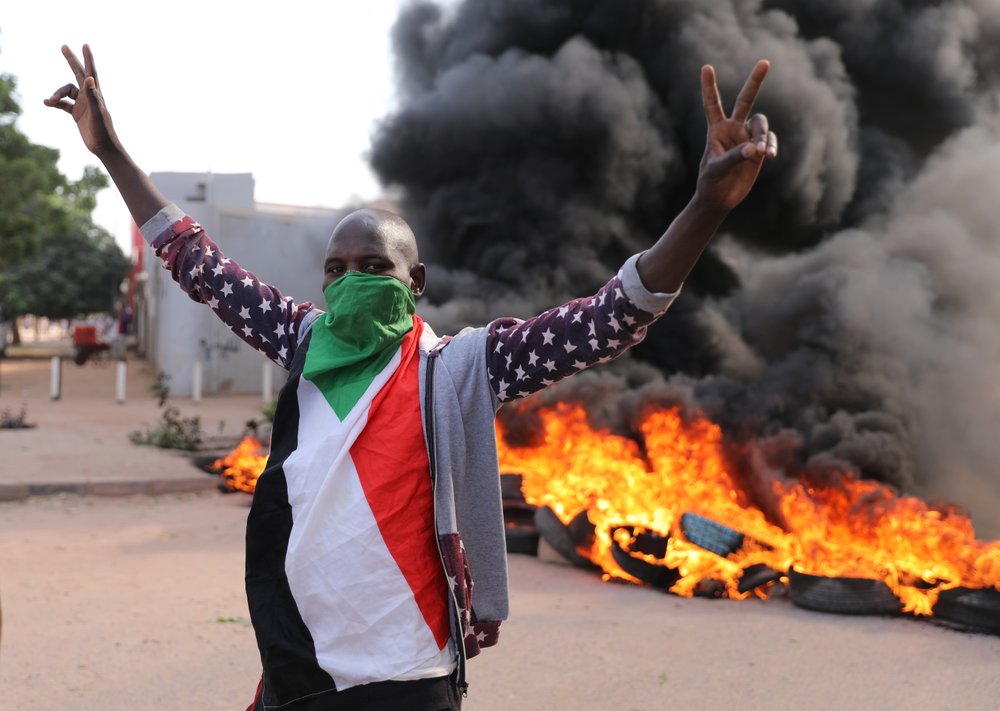 CAIRO (AP) — Sudanese protesters took to the streets in the capital and across the country Wednesday over dire living conditions and a deadly crackdown on demonstrators in the east earlier this month.

The protests came on the anniversary of a 1964 uprising that ended six years of military rule. Sudan is currently ruled by a joint civilian-military government, following the popular uprising that toppled longtime autocrat Omar al-Bashir last year.

The demonstrations came a week after at least 15 people were killed and dozens were wounded in tribal clashes and a government crackdown against protesters in eastern Sudan. The violence broke out after Prime Minister Abdalla Hamdok earlier this month sacked Saleh Ammar, governor of the eastern Kassala province.

At least one protester in his 20s was shot dead and more than two dozen others wounded in Khartoum, according to the Sudan Doctors’ Committee, which also campaigned for al-Bashir’s ouster.

Security forces blocked off major roads, bridges and streets leading to the presidential palace and the military’s headquarters in Khartoum ahead of the demonstrations. The state-run SUNA news agency said the city center was in complete lockdown.

The “million-man march” was called by the so-called Resistance Committees, which were instrumental in the protests against al-Bashir and the generals who removed him from office and briefly held power. Other political parties and professional unions took part in the demonstrations.

The protesters are calling for the formation of a legislative body, which is supposed to happen as part of a power-sharing agreement they reached with the military last year.

They also demand results from an independent investigation into the crackdown against protests last year, including the deadly break-up of the main Khartoum protest camp in June 2019. The probe was supposed to have been completed by February, but investigators asked for an extension, in part due to the coronavirus pandemic.

The transitional government has been struggling to revive Sudan’s battered economy amid a huge budget deficit and widespread shortages of essential goods, including fuel, bread and medicine.

Annual inflation soared past 200 percent last month as prices of bread and other staples surged, according to official figures.

Sudan’s economy has suffered from decades of US sanctions and mismanagement under al-Bashir, who had ruled the country since a 1989 Islamist-backed military coup.

President Donald Trump recently said Sudan will be removed from the blacklist if it follows through on its pledge to pay $335 million to American terror victims and their families. The terror designation dates back to the 1990s, when Sudan briefly hosted Osama bin Laden and other wanted militants.

Sudanese officials welcomed Trump’s announcement, which is widely seen as a key incentive for the east African country to normalize relations with Israel.

Islamists and supporters of al-Bashir’s government held a protest in Khartoum, calling for the resignation of Hamdok, the prime minister. Footage circulated online showed protesters burning an Israeli flag, in an apparent rejection of a looming deal with Israel.

Sudan hosted the landmark Arab conference after the 1967 Mideast War in which eight Arab countries approved the “three no’s”: no peace with Israel, no recognition of Israel and no negotiations. But in recent years those animosities have softened, and both countries have expressed readiness to normalize relations.

In Washington, US Secretary of State Mike Pompeo said Wednesday the Trump administration has already started the processes of removing Sudan from the terror list.

“We believe there’s a firm legal basis for doing that. We think that there will be an enormous bipartisan consensus that that is the right thing to do,” he told a news conference.

Pompeo, who visited Sudan last month to push for a deal with Israel, said the administration has also worked “diligently” with Khartoum to make “the case for why that is in the Sudanese government best interest to make that sovereign decision” of establishing ties with Israel.

A demonstrator gives the victory sign at a protest, in Khartoum, Sudan, Wednesday, October 21, 2020. Protesters have taken to the streets in the capital and across the country over dire living conditions and a deadly crackdown on demonstrators in the east earlier this month. Sudan is currently ruled by a joint civilian-military government, following the popular uprising that toppled longtime autocrat Omar al-Bashir last year. (AP Photo/Marwan Ali)

Sudanese strains surface as US pressure triggers debate on Israel