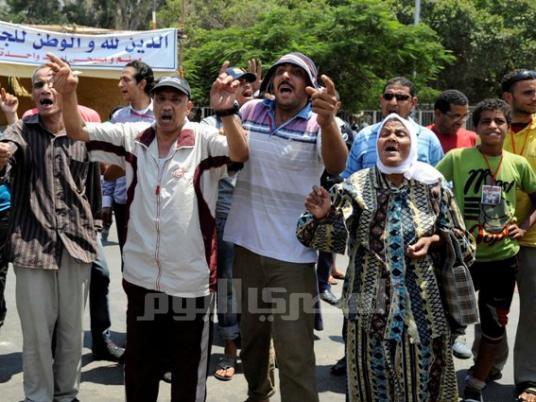 Despite the appointment of a new government on Thursday, Egypt is far from showing signs of stability. Newspaper pages on Sunday epitomize the social and political struggle in which Egyptians are living, bearing news of armed street fights, strikes, protests, and a revolution planned against the Muslim Brotherhood for the end of the month.

The state-run Al-Ahram Daily reports that hundreds blocked traffic on the Sinai international road towards Sharm el-Sheikh for ten hours during Friday and Saturday as a protest against the lack of security.

Traffic congestion ensued, and the armed forces persuaded the protesters to open the road after promising to answer their demands.

In recent days armed men attacked and injured four people and stole their cars on the road, the state-run newspaper reports. Meanwhile, a sit-in in front of South Sinai Security Directorate is entering its eighth day. Protesters there are raising the same demands and requesting the resignation of the South Sinai Security Chief.

The privately owned Al-Watan Newspaper features a story on its front page with the headline “protests surround Morsy and the Brotherhood.” It reports that demonstrations against President Mohamed Morsy and the Muslim Brotherhood took off Friday evening, asking Morsy to step down and demanding the dissolution of his Islamist group.

Al-Watan runs another story on the front page reporting the arrest of 16 protesters in Daqahlia Governorate after clashes with Central Security Forces. Demonstrators surrounded the governor’s house in protest of a bread shortage.

Clashes also took place in Qena between people waiting in long queues in front of bakers. In the meantime, the Minister of Supply and Internal Trade ordered the implementation of an urgent plan coordinating all supply directorates in the governorates to solve the supply problems.

Privately owned Youm7 reports that residents in several governorates saw a night of violence for reasons including family disputes and traffic fights. The conflicts resulted in injuries, house fires, and vandalized public and private property.

According to Youm7, Mahalla resembled a battlefield due to a feud between two families. The feud began when one family kidnapped a member of the other due to money disputes.

Similarly, Central Security Forces were deployed in Sohag to contain an armed fight between two families that resulted in the injury of four people and destruction of four cars, reports Youm7.

In similar news, five masked men intersected a police officer in the street and stole his car and gun in Sharqiya.

Three people died and thirteen were wounded in another family fight in Alexandria in which they used guns and Molotov cocktails.

The privately owned Al-Tahrir newspaper reveals that a number of the Muslim Brotherhood’s young members have submitted a petition to the group’s Guidance Bureau requesting an investigation into its most powerful leader Khairat al-Shater, the deputy supreme guide, over administrative corruption allegations during the past period. The corruption allegations begin with his assignment to lead the group in the period leading to the victory of Morsy in the presidential elections.

The young members have accused Shater of exercising absolute power in developing the Brotherhood during this period, and denying contributions from other group figures.

The petition also condemned Shater’s expulsion of Abdel Moneim Abouel Fotouh from the Brotherhood after he decided to run for elections in defiance of the group’s rules at the time.

They accused the powerful businessman of dominating the group’s media portfolio through newly established electronic committees that supervise websites. The committees, the petition said, have been looking after Shater’s projects and interests in particular.

Last but not least, they said there is a clear overlap between Shater’s economic activities and those of the Brotherhood.

In the meantime, a number of activists that oppose the Brotherhood’s rule have started preparations for the “second anger revolution” scheduled for 24 and 25 August, by forming Facebook invitations to mobilize for the mass protests, reports Al-Watan. The day commemorates the burning down of the Brotherhood’s offices in the 50s. As a result, FJP and the Brotherhood are taking precautionary measures to protect their offices across the country.

The privately owned Al-Dostour reports a fire at the FJP’s office in Agouza after an attacker threw a Molotov cocktail on the building while riding a motorbike.