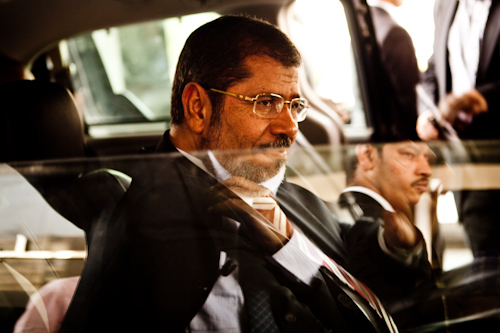 Defying all journalistic principles, the privately owned Al-Dostour devotes its Sunday issue to attacking the Muslim Brotherhood, its presidential candidate Mohamed Morsy and Parliament for the benefit of Ahmed Shafiq, Morsy’s opponent in the presidential election runoff slated for 16 and 17 June.

Al-Dostour, which is owned by Wafd Party head Al-Sayed al-Badawy, runs provocative and sensational front-page headlines. The top headline reads “News about the Parliament’s clinical death,” referring to the anticipated Supreme Constitutional Court verdict on the constitutionality of the Brotherhood-majority Parliament. “The Parliament’s state is getting worse and its death is expected to be announced before the presidential elections. The funeral will be held in front of the Supreme Constitutional Court Thursday. Congratulations to Egyptians.”

The front-page headline describes People’s Assembly Speaker Saad al-Katatny as “egoistic and arrogant,” saying “Katatny is above the constitution and the law.” Katatny said in a press conference Saturday that no one can dissolve Parliament and if the court rules that the parliamentary elections were invalid, Parliament would look into the verdict but it would not be a decision to dissolve Parliament itself, reports Al-Dostour. The speaker added that the Constitutional Declaration doesn’t give the Supreme Council of the Armed Forces the jurisdiction to dissolve Parliament.

Another story on Al-Dostour’s front page, under the headline “The dirty war against Shafiq continues,” reports that two people were detained for impersonating police officers, having made a video in which one of them appears in a police outfit, paying money to people as bribes to vote for Shafiq.

The paper doesn’t run a single story covering Morsy’s campaign but reports that 27 political parties and movements as well as the Sufi Orders have announced their endorsement of Shafiq in the election.

To top it all, Al-Dostour publishes a non-paid ad on its last page, which contains a SWOT analysis comparing Shafiq and Morsy. The analysis, which ends in favor of Shafiq, says Morsy doesn’t deserve to rule Egypt as he doesn’t have executive experience, will blindly follow the Supreme Guide orders, will suppress opposition, will maintain corruption and get Egypt into a war with Israel, in addition to other disasters.

In contrast to Al-Dostour’s headlines, state-run Al-Ahram quotes Katatny on its front page, saying, “We will implement the [court]’s ruling no matter what it is and we thank Supreme Council of the Armed Forces” for its efforts to mediate between the political forces to reach an agreement on the Constituent Assembly. Parliament is scheduled to approve the law on the assembly that will write the new constitution tomorrow and elect its members on Tuesday, reports Al-Ahram.

In addition, state-run Al-Akhbar publishes “the true conversation” that took place between SCAF general Hassan al-Roweiny, Brotherhood leader Mohamed al-Beltagy and Islamist preacher Safwat Hegazy the day after the so-called ‘Battle of the Camel’ when protesters in Tahrir Square were brutally attacked on 2 February last year.

In a TV interview last week, Shafiq accused “bearded” snipers of killing protesters from the roofs of buildings during the 25 January uprising, citing a conversation that took place between Roweiny, Beltagy and Hegazy in Tahrir Square back then.

Al-Akhbar’s story quotes an anonymous source who confirms that Roweiny asked everyone to come down from the rooftops and Beltagy replied that the Brotherhood’s people are up there to protect protesters and prevent more attacks like the Battle of the Camel.

Al-Akhbar breaks the news about the lingering confusion around the Political Isolation Law and the possible disqualification of Shafiq from the race. According to legal sources, the administrative court has asked the lawyer who appealed the law in Banha to resort to the Supreme Constitution Court, which bypasses the controversy around the Presidential Elections Commission’s jurisdiction to refer the law to the court.

The court commissioners submitted their non-binding legal opinion last Thursday to the court, advising that the election commission doesn’t have the jurisdiction to refer the Political Isolation Law to the court because it’s an administrative body, not a legal one.

The law, if enforced, would disqualify Shafiq from the presidential race.

Finally, privately owned Al-Shorouk reveals that the SCAF has issued an amendment to Article 38 of the Constitutional Declaration on 25 September 2011 that gives immunity to the parliamentary elections law, according to anonymous sources. Thus the Supreme Constitutional Court can’t rule the law unconstitutional and dissolve Parliament.