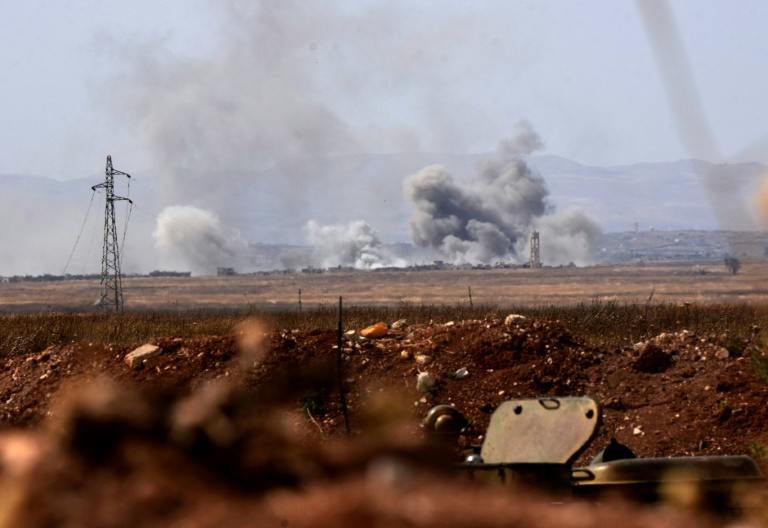 At least 35 combatants including 26 pro-regime forces were killed Saturday in clashes and air strikes that erupted at dawn in northwestern Syria, a war monitor said.

Ensuing clashes in the north of Hama province left 26 pro-regime forces dead, including eight who were killed in a mine explosion, the Observatory said.

The Idlib region of some three million people is supposed to be protected from a massive regime offensive by a buffer zone deal that Russia and Turkey signed in September.

But it was never fully implemented, as jihadi refused to withdraw from a planned demilitarized zone.

In January, the Hayat Tahrir al-Sham alliance led by Syria’s former Al-Qaeda affiliate extended its administrative control over the region, which includes most of Idlib province as well as adjacent slivers of Latakia, Hama and Aleppo provinces.

The Syrian government and Russia have upped their bombardment of the region since late April, killing more than 360 civilians, according to the Observatory.

Turkey said Friday that it did not accept Russia’s “excuse” that it had no ability to stop the Syrian regime’s continued bombardments in the last rebel bastion of Idlib.

“In Syria, who are the regime’s guarantors? Russia and Iran,” Foreign Minister Mevlut Cavusoglu told state news agency Anadolu in a televised interview.

“Thus we do not accept the excuse that ‘We cannot make the regime listen to us’,” he said.

His comments came as Turkey disagreed with Russia earlier this week after Moscow claimed a new ceasefire had been secured in the province following weeks of regime bombardments — a claim that was denied by Ankara.

Syria’s war has killed more than 370,000 people and displaced millions since it started in 2011 with the repression of anti-government protests.

Russia launched a military intervention in support of the regime in 2015, helping its forces reclaim large parts of the country from opposition fighters and jihadists.