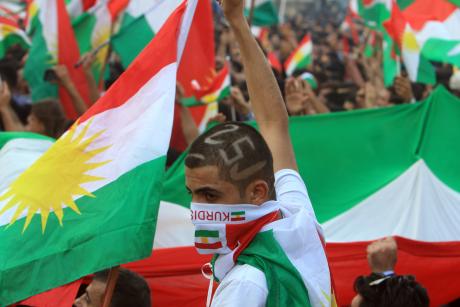 BEIRUT/BAGHDAD (Reuters) – Syrian Kurdish special forces have joined an offensive against Islamic State militants in eastern Syria, a commander said, after the jihadists recovered ground from US-backed forces in a fierce counter attack.

Islamic State (IS) launched the assault against the US-backed Syrian Democratic Forces (SDF) in the Deir al-Zor region near the Iraqi border on Friday. Iraqi Shi’ite militias reinforced their side of the frontier in response and Iraq’s military said it was ready to take on any militants who tried to cross.

The Syrian Observatory for Human Rights said around 70 SDF fighters were killed in the assault which Islamic State launched under cover of a sandstorm and drew on suicide bombers and female jihadists. The SDF says it lost 14 fighters.

A spokesman for the US-led coalition said Islamic State had been able to regain some ground but the SDF would “come back with coalition support”.

An SDF commander attributed the setback partly to the relative inexperience of the Arab SDF forces which have carried out much of the fighting against hardened Islamic State militants in Deir al-Zor.

While the Arab fighters of the Deir al-Zor Military Council had been able to make advances to a “certain level”, Islamic State is resisting even more fiercely as the offensive closes in on its last pockets.

This required the deployment of special forces from the Kurdish People’s Protection Units (YPG), which spearheads the SDF, and its female affiliate the YPJ.

The fighting is the latest phase of efforts by the US-led coalition and the SDF to clear Islamic State from its last footholds east of the Euphrates River following last year’s defeat of the group in Raqqa, its Syrian headquarters.

“This battle is give and take sometimes like most military fights and we have been saying from the beginning, this will be a difficult struggle,” Colonel Sean Ryan, the coalition’s spokesman, said in an email to Reuters.

“ISIS is using experienced foreign fighters with nothing to lose and the SDF will come back with coalition support and continue to degrade and destroy ISIS,” he added.

Iraq’s Popular Mobilisation Forces (PMF), an umbrella group that includes mostly Shi’ite militias, said it had reinforced along much of the border with Syria after the SDF was pushed back by IS.

“The Iraqi-Syrian border was not secure before. Our operations have fixed that completely from Rabia (in the northwest) to Tanf” in the southwest near the Jordanian-Iraqi-Syria border and close to a US military base, the PMF’s website quoted a senior commander as saying.

An Iraqi military spokesman confirmed the PMF, which were formally absorbed into the security forces earlier this year, had reinforced on the border. He also said the army was prepared for any attempt by militants to cross.

“We have units behind the border, including artillery, ready to deal with any attempts by terrorist elements to infiltrate … there is also aerial surveillance,” Brigadier General Yehia Rasool said.

Helicopters dropped leaflets to Iraqi forces and tribes warning them of attempts by IS fighters to cross the border in retreat from their fight with the SDF, the interior ministry’s security media center said.