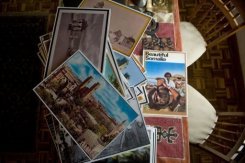 Funky dancing in a seaside bar, Vespa scooters on elegant, broad boulevards: the faded images of a lost Somalia and its ancient capital are at odds with a place now better known for famine and war.

Those who dare to visit contemporary Mogadishu, often dubbed the world's most dangerous capital, catch only a glimpse of its vanished beauty in the bullet-scarred wasteland devastated by more than two decades of civil war.

But a new photo exhibition, entitled a "Pictorial Tribute to Africa's Most Wounded City", offers proof of Mogadishu's forgotten past alongside recent — and more recognizable — images of the ruin so much of it has become.

"Many of the young people of Somalia were born in refugee camps or around the world, so they don't know Mogadishu, they don't know what they lost," said the show's curator Mohamud Diriye, former head of Mogadishu's museums.

Its organizers hope the pre-1990s images, to be displayed in the Alliance Française in the Kenyan capital Nairobi in June, recall what Mogadishu once was and, perhaps, what it could be again.

"The memory of the past offers hope for the future," said Diriye. He managed to rescue boxes of historical photographs when brutal civil war broke out in 1991 — battles that continue today as Islamist fighters attack the weak Western-backed government and African Union forces in Mogadishu.

"Nothing was left," he said, shaking his head at a photograph showing gaping holes smashed in a museum wall. "It was all looted, everything."

One photograph from the early 1980s shows a white-washed hotel against crashing waves, a once popular nightclub and bar on its rooftop. Today only the grey concrete pillars that barely hold up the crumbling structure remain.

"There used to be more nightclubs than mosques in Mogadishu, believe me," said Diriye wistfully, pointing to another shot from the same years of women in flowery mini-dresses grooving alongside men in tight white flares.

"Rock 'n roll, cha-cha-cha, reggae, the twist, Soul Train, we'd dance them all," he added, lingering over a shot of his younger self, where he sported a fine afro haircut and moustache. "My dream was to be a musician."

Outside a cathedral from the Italian colonial era — now a roofless ruin once used as target practice by Islamist fighters — schoolgirls smile for the camera in front of a bride in a flowing white wedding dress.

Female police officers in caps and tight blouses pose in another shot from the 1980s, an image unthinkable today in the restive capital even though the Al-Qaeda affiliated Islamist Shebab insurgents were driven out last year.

In another shot, a narrow street with Moorish architecture like that in the film classic Casablanca leads to a white-washed stone archway, beyond which the deep blue waters of the Indian Ocean glitter in the distance.

"Instead of looking at our differences, the photographs help to show what we all have in common — our history," said co-curator Ismail Osman, who grew up in Somalia but fled to the US in 1991.

"I hope people look at the images and say, 'We had all this! Then we can agree on something.'"

Another shot shows a tourism poster of white sand beaches and palm-lined streets with a smiling child in the foreground and the caption "Beautiful Somalia".

"People used to come to Mogadishu for holidays," said Osman. "As a teenager in the 1980s, I used to remember that I could choose from 11 different cinemas."

Fighting erupted in Somalia in the late 1980s and escalated into civil war after a 1991 coup, with rival militias, warlords and Islamist fighters battling ever since for control of the lawless nation.

"There is a stereotype of Mogadishu — all you see normally are images of a pirate, terrorist or a starving mother and child," said photographer Rasna Warah, a Kenyan of Indian origin who took the contemporary shots in the show.

"So when I arrived in Mogadishu, I couldn't believe that there are still buildings of beauty there, even if they are full of bullet holes," said Warah, whose visit to the city last year gave her the idea for the show.

Mogadishu —- from the Arabic Maq'adul Shah or "seat of the sovereign" — was founded in the 10th century by Arab and Persian traders.

Ships loaded with cloth, spices and other goods would cross the Indian Ocean to trade at Mogadishu's port for ivory, slaves, camels, frankincense and myrrh.

"It is an ancient city, a magic city, and some of the mosques are the oldest in Africa," Diriye said.

Later, rulers from Oman and the East African spice island of Zanzibar took control before Italian colonizers arrived in 1891, transforming much of the city with wide boulevards and Roman-style triumphal arches.

Today, hundreds of thousands of displaced people live in and around Mogadishu, many in rag-and-plastic shelters, some in the roofless ruins of hotels, churches and villas.

But despite the violence, Mogadishu retains its unique character: Arab-style coral stone houses and a centuries-old lighthouse are crumbling but still line the seafront, while the national theatre is pockmarked with bullets and lost its roof but reopened earlier this year.

The exhibition — partly funded by a Turkish company — has also been shown in Turkey and organizers hope it will one day make it to Mogadishu.

"Our main goal is to take the photos home to show people there," Warah said. "We will just have to find a building without bullet holes to put it in."