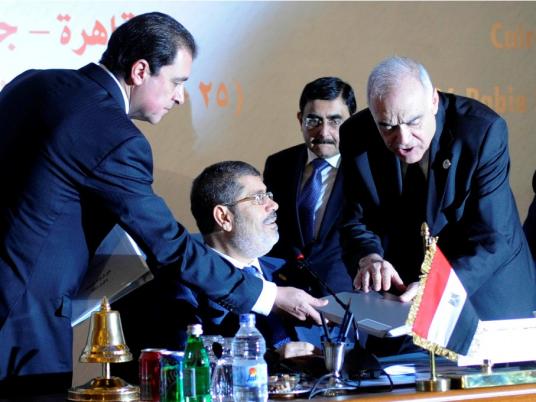 The National Council of Human Rights’ stark report on clashes that broke out following the second anniversary of the 25 January revolution was overshadowed by the Organization of Islamic Cooperation Summit, which takes center stage in most state and independent newspapers Thursday.

State-run Al-Ahram and Al-Gomhurriya newspapers both lead with President Mohamed Morsy’s role in the summit, quoting him about his views on the Syrian crisis and Palestine.

Al-Gomhuriya reports that Morsy, along with other Muslim leaders, had denounced violence and extremism during the summit, while Al-Ahram focuses on leaders' calls for an end to the bloodshed in Syria as well as a solution to the Palestinian-Israeli situation.

Ahmadinejad spoke about new developments in Egypt-Iranian relations. He also touched on the Syrian impasse, saying a national accord is the only way out of the crisis, which can be achieved through free elections.

Al-Gomhuriya reports the Iranian president is optimistic reconciliation is on the horizon for embattled Syria, since some factions have agreed to engage in national talks.

Independent newspaper Al-Shorouk also leads with coverage of the OIC, quoting Morsy as saying that Muslim nations bear some responsibility for "Islamophobia" found outside the Muslim world.

Meanwhile, the Freedom and Justice Party newspaper, the official party publication, reads as a special OIC supplement, with reports on the summit adorning almost every page.

On the other side of the spectrum, independent Al-Tahrir newspaper's coverage of the OIC criticizes Morsy and his government for summit blunders and controversies.

The newspaper says the problems began when Senegalese and Turkish foreign ministers were refused entrance to the summit hall on the basis they were not high-level officials, despite the fact that the Qatari foreign minister was allowed in alongside Emir Sheikh Hamad bin Khalifa.

Al-Tahrir also criticizes the government’s failure to protect Ahmadinejad, who was almost assaulted as he was coming out of the Al-Hussein Mosque in Cairo Tuesday.

“The Muslim Brotherhood not only failed to lead country and meet the promises made by Morsy in his campaign program, they also failed again with the organization of the OIC,” the report in Al-Tahrir reads.

State-owned Al-Akhbar, on the other hand, gives priority to the NCHR report and pushes coverage of the OIC to its eighth page.

A bold read headline on its front page reads: “Rights council accuses police of shooting protesters,” followed by a story that details the report’s findings and recommendations.

The report found 56 people were killed and another 2,028 injured in the clashes. Some 361 of the injured were police.

Al-Akhbar also reports that the council called for the formation of an independent committee to investigate the violence.

Al-Ahram and Al-Shorouk also make room for the report’s findings on their front pages, highlighting the number of dead and injured and the NCHR's call for further investigation.

Al-Gomhuriya, however, reports the findings on its fourth page and emphasizes incidents involving blocked roads and other disturbances, adding that most of the protests were violent and that security officials failed to keep the peace.

“The regime doesn’t listen. It resorts to security measures and the Interior Ministry to solve crises, which led to the death of 53 people and injuries of over 1,600 civilians,” Al-Shorouk quotes Nashaat as saying.

For its part, the Freedom and Justice Party newspaper’s only mention of the report was a blurb buried in the middle that says the findings of the report were announced, without citing any relevant details.

Furthermore, only independent papers Al-Shorouk, Al-Dostour and Al-Tahrir pay any attention to new calls for protests against Morsy scheduled Friday, dubbing the demonstration “Friday of Dignity.”

Al-Tahrir’s headline says 38 political parties and civil society groups are calling for protests on Friday and that National Salvation Front youth are mobilizing efforts to encourage Morsy's government to step down.

A special report in Al-Tahrir also tackles the controversy surrounding the arrest of children under the age of 15 during the clashes, detailing harrowing and dark accounts of those arrested.

In an article titled “Al-Tahrir continues to expose the Brotherhood president’s regime,” the paper says that ousted President Hosni Mubarak could not have imagined how Morsy's blunders have improved the former leader's image.