Republican presidential front-runner Donald Trump predicted that the United States is on course for a "very massive recession," warning that a combination of high unemployment and an overvalued stock market had set the stage for another economic slump.

"I think we’re sitting on an economic bubble. A financial bubble," the billionaire businessman said in an interview with The Washington Post published on Saturday.
Coming off a tough week on the campaign trail in which he made a series of missteps, Trump's latest comments bring him back into the limelight ahead of Tuesday's important primary in Wisconsin where he trails in the polls.
The former reality TV star said that the real US jobless figure is much higher than five percent number released by the US Bureau of Labor Statistics.
"We’re not at 5 percent unemployment," Trump said.
"We’re at a number that’s probably into the twenties if you look at the real number,” he said, adding that the official jobless figure is "statistically devised to make politicians — and in particular presidents — look good."
Trump said “it’s a terrible time right now” to invest in the stock market, offering a more bleak view of the US economy than that held by many mainstream economists.
The interview was bylined by the Post's Robert Costa and famed Watergate reporter Bob Woodward.
A real estate magnate, Trump has made appealing to blue-collar workers a hallmark of his bid for the Republican nomination for the Nov. 8 presidential election, often blaming unemployment on the outsourcing of US jobs and facilities to countries such as China and Mexico.
Trump vowed in the interview to wipe out the more than US$19 trillion national debt "over a period of eight years," helped by a renegotiation of trade deals.
"I’m renegotiating all of our deals, the big trade deals that we’re doing so badly on," he said.
Tags
presidential candidate Donald Trump recession unemployment US economy 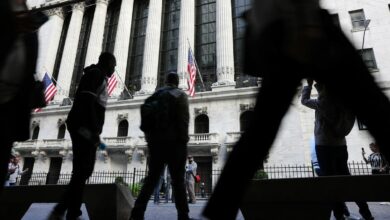