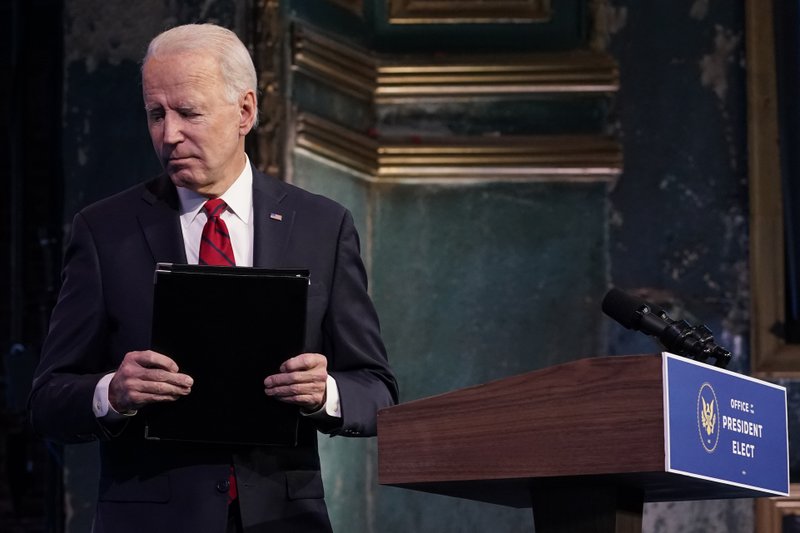 WASHINGTON (AP) — President-elect Joe Biden’s plan to scrap President Donald Trump’s vision of “America First” in favor of “diplomacy first” will depend on whether he’s able to regain the trust of allies and convince them that Trumpism is just a blip in the annals of US foreign policy.

It could be a hard sell. From Europe to the Middle East and Asia, Trump’s brand of transactional diplomacy has alienated friends and foes alike, leaving Biden with a particularly contentious set of national security issues.

Biden, who said last month that “America’s back, ready to lead the world, not retreat from it,” might strive to be the antithesis of Trump on the world stage and reverse some, if not many, of his predecessor’s actions. But Trump’s imprint on America’s place in the world — viewed as good or bad — will not be easily erased.

US allies aren’t blind to the large constituency of American voters who continue to support Trump’s nationalist tendencies and his belief that the United States should stay out of world conflicts. If Biden’s goal is to restore America’s place in the world, he’ll not only need to gain the trust of foreign allies but also convince voters at home that international diplomacy works better than unilateral tough talk.

Trump has insisted that he’s not against multilateralism, only global institutions that are ineffective. He has pulled out of more than half a dozen international agreements, withdrawn from multiple UN groups and trash talked allies and partners.

Biden, on the other hand, says global alliances need to be rebuilt to combat climate change, address the COVID-19 pandemic and prepare for future epidemics and confront the growing threat posed by China. The national security and foreign policy staff that he has named so far are champions of multilateralism.

His choices for secretary of state, Antony Blinken, deputy secretary of state Wendy Sherman, national security adviser Jake Sullivan and foreign aid chief Samantha Power — all veterans of the Obama administration — underscore his intent to return to a foreign policy space that they believe was abandoned by Trump.

“Right now, there’s an enormous vacuum,” Biden said. “We’re going to have to regain the trust and confidence of a world that has begun to find ways to work around us or without us.”

Biden intends to rejoin the Paris climate agreement and cooperate again with the World Health Organization. He plans to smooth relations with Europeans and other friends and refrain from blasting fellow members of NATO, and he may return the United States to the Iran nuclear agreement. Still, many Americans will continue to espouse Trump’s “America First” agenda, especially with the US economy struggling to recover from the coronavirus pandemic, civil strife in American streets over racism and the absence of civil political discourse.

“Whether people liked it or not, Trump was elected by Americans in 2016,” said Fiona Hill, who worked in the Trump White House’s National Security Council and now is at the liberal-leaning Brookings Institution.

Trump’s election in 2016 and the tens of millions of votes he garnered in 2020 reflect a very divided nation, she says.

“We have to accept that the electoral outcome in 2016 was not a fluke,” Hill said.

Steven Blockmans, research director at the Centre for European Policy Studies in Belgium, said Europeans should not kid themselves into believing transatlantic relations will return to the way they were before Trump.

“In all but name, the rallying cry of ‘America First’ is here to stay,” he said. “Biden has vowed to prioritize investment in US green energy, child care, education and infrastructure over any new trade deals. He has also called for expanded ‘Buy American’ provisions in federal procurement, which has long been an irritant in trade relations with the European Union.”

Each part of the world holds a different challenge for Biden.

Fear of China’s quest for world dominance started to mount before Trump came to office. Early on, Trump sidled up to China’s authoritarian president, Xi Jinping. But after efforts to get more than a first-phase trade deal failed, the president turned up the heat on China and repeatedly blamed Beijing for the coronavirus pandemic.

He sanctioned the Chinese, and in speech after speech, top Trump officials warned about China stealing American technology, conducting cyberattacks, taking aggressive actions in the South China Sea, cracking down on democracy in Hong Kong and abusing the Muslim Uighurs in western China.

Increasingly, Republicans and Democrats alike are worried about a rising economic and geopolitical threat from China, and that concern won’t end when Trump leaves office.

Resetting US relations with Asia allies is instrumental in confronting not only China but also North Korea.

Trump broke new ground on the nuclear standoff with North Korea with his three face-to-face meetings with North Korea’s Kim Jong Un. But Trump’s efforts yielded no deal to persuade Kim to give up his nuclear weapons in exchange for sanctions relief and security assurances. In fact, North Korea has continued to develop its nuclear capabilities.

Biden might be forced to deal with North Korea sooner than later as experts say Pyongyang has a history of conducting tests and firing missiles to garner Washington’s attention around US presidential elections.

Nearly 20 years after a US-led international coalition toppled the Taliban government that supported al-Qaida, Afghan civilians are still being killed by the thousands. Afghan security forces, in the lead on the battlefield, continue to tally high casualties. Taliban attacks are up outside the cities, and the Islamic State group has orchestrated bombings in the capital, Kabul, including one in November at Kabul University that killed more than 20 people, mostly students.

The US and the Taliban sat down at the negotiation table in 2018. Those talks, led by Trump envoy Zalmay Khalilzad, eventually led to the US-Taliban deal that was signed in February 2020, providing for the withdrawal of US and NATO troops from Afghanistan.

Set on making good on his campaign promise to withdraw US troops from “endless wars,” Trump cut troops from 8,600 to 4,500, then ordered troop levels to fall to 2,500 by Inauguration Day. The United States has pledged to pull all US troops from Afghanistan by May 1, just months after Biden takes office, but it’s unclear if he will.

Trump opted to think outside the box when it came to the Israeli-Palestinian conflict and relations with Arab nations.

In 2018, Trump pulled the United States out of the Iran nuclear deal, in which world powers agreed to lift sanctions on Tehran if it curbed its nuclear program.

Trump said the deal was one-sided, didn’t prevent Iran from eventually getting a nuclear weapon and allowed it to receive billions of dollars in frozen assets that it has been accused of using to bankroll terror proxies destabilizing the Mideast.

Biden says exiting the deal was reckless and complains that Iran now has stockpiled more enriched uranium than is allowed under the deal, which is still in force between Iran and Britain, China, Russia, France and Germany.

By DEB RIECHMANN and MATTHEW LEE

Top US official gears up for US presence in Western Sahara