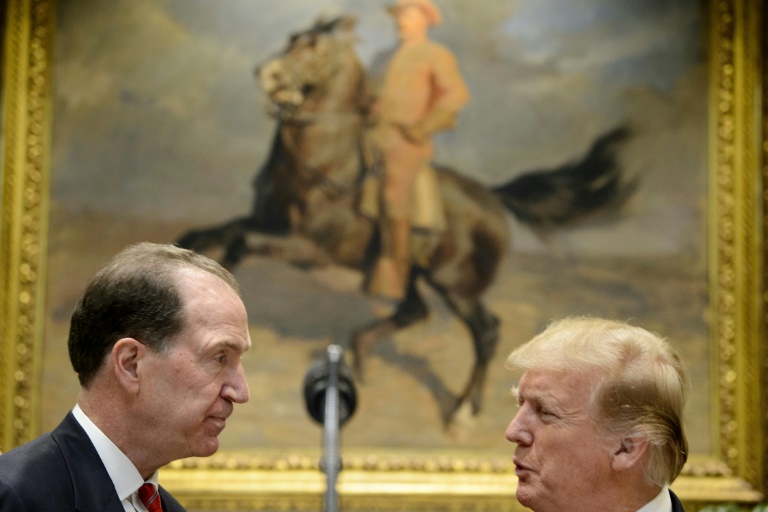 President Donald Trump’s choice to lead the World Bank is a firebrand critic of the world’s largest anti-poverty lender — an institution he has called wasteful, corrupt and overly generous to China.

Those complaints are similar to those voiced by others in the development community. But that does not mean they have found a new ally in David Malpass, the senior US Treasury official who has pledged to reform the bank.

Nancy Pelosi, the newly reinstalled Democratic speaker of the US House of Representatives, says Trump’s choice threatens to “undermine the institution’s mission.”

And Liberia’s former minister of public works W. Gyude Moore tweeted that “an incorrigible arsonist will now be our fire chief.”

Many activists have long called for reforms at the World Bank, citing a litany of alleged human rights failures and scandals, and saying projects all too often left the world’s poorest even worse off, harmed the environment or entrenched the power of oligarchies and despots.

Those critics might well have nodded their heads in accord in 2017 when Malpass said international financial institutions such as the World Bank “spend a lot of money” but are “not very efficient.”

“They are often corrupt in their lending practices and they don’t get the benefit to the actual people in the countries,” he said in congressional testimony.

When pressed for examples, he cited situations in Venezuela and South Africa, countries that do not have programs with the World Bank.

Internal audits and outside reports have, however, tied World Bank funds to forced labor in Uzbekistan, death squads in Honduras and a Chadian oil pipeline that enriched the undemocratic local government all while child mortality rose, to name just a few examples.

So is Malpass a kindred spirit?

Analysts and activists say probably not.

David Pred, head of Inclusive Development International, which has accused the World Bank of back-door financing for coal-fired energy in Asia that is likely to spur global warming, strongly questioned Trump’s choice.

“While some of Malpass’ past critiques of the World Bank may be valid, the former chief economist of a financial institution whose recklessness helped blow up the global economy in 2008 is one of the last people we can count on to make the bank more accountable,” he told AFP.

Malpass served as chief economist at the former investment bank Bear Stearns, whose collapse marked the start of the global financial crisis.

To be sure, Malpass’ nomination has delighted some observers, including the World Bank’s conservative critics.

A Wall Street Journal editorial called Malpass, himself a long-time contributor, “the best man to run” an institution whose operations he well understands.

With a long career in development economics, Malpass has worked to “wean” the increasingly wealthy and ambitious China off World Bank financing as it pursued its ambitious “Belt and Road” infrastructure initiative across multiple continents, the newspaper said.

The Economist likewise said US allies could be “relieved” that Trump had chosen one of his administration’s “few remaining grown-ups” to be its next president, calling his reform efforts “mostly unobjectionable and reassuringly unoriginal.”

But elsewhere Malpass is not viewed simply as a critic.

Moore, the former Liberian minister, told AFP that Malpass’ opposition to lending to China could be incompatible with the bank’s very business model.

Returns from those loans provide helps to fund for assistance to low-income countries, many of which are now concentrated in Africa, he said.

“He’s never put forth an alternative about how the bank is going to grow its reserves,” Moore said.

“To have a person who is fundamentally opposed to the way the bank does business raises questions for me and is alarming.”

‘Drop in the bucket’

The bank did not respond to Malpass’ criticism in 2017, but it touts the precipitous drop in extreme global poverty — which it says fell to 10 percent from 36 percent between 1990 and 2015 — as evidence of its success.

Malpass told reporters last week that the bank had changed since his 2017 testimony.

“There were criticisms that I had that were addressed in the reform package” of 2018, he said, adding that he wanted to focus on the bank’s “core mission” of poverty eradication.

Yet Elana Berger, executive director of the Bank Information Center, which scrutinizes World Bank lending and shares some of Malpass’ concerns, remains dubious.

“I agree that the World Bank frequently falls short of achieving its mission because its projects are very often not well targeted” towards the goal of poverty reduction, she told AFP.

But she said it was unclear whether Malpass shares the bank’s goals.

Berger said that $1 billion fund represented “a drop in the bucket” compared to the billions the bank spends in a given year.

The bank’s board will accept nominations through mid-March, but under an unwritten rule Washington has anointed the World Bank’s president since its creation following World War II — a custom that faces mounting opposition.