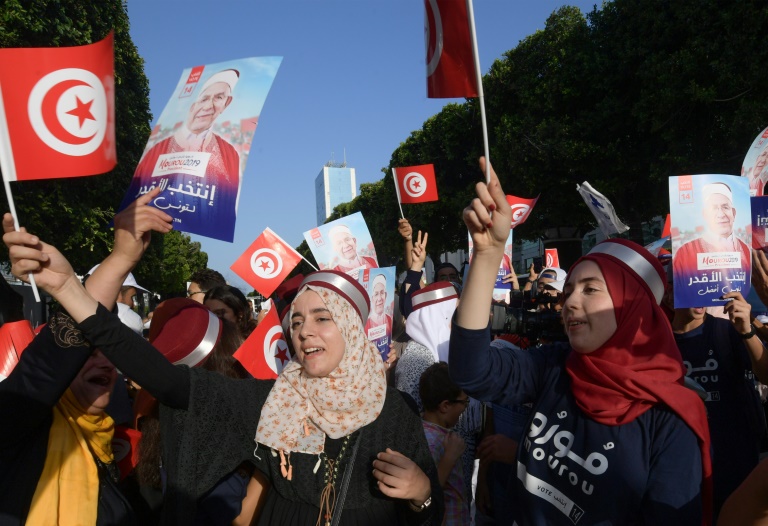 Rarely has the outcome of an election been so uncertain in Tunisia, the cradle and partial success story of the Arab Spring, as some seven million voters head to the polls Sunday to choose from a crowded field.

Key players include media mogul Nabil Karoui — behind bars due to an ongoing money laundering probe — Abdelfattah Mourou, who heads a first-time bid on behalf of his Islamist inspired Ennahdha party, and Prime Minister Youssef Chahed.

The premier’s popularity has been tarnished by a sluggish economy and a high cost of living, and he has found himself having to vehemently deny accusations that Karoui’s detention since late August is politically inspired.

The election follows an intense campaign beset by personality clashes, albeit one with few clear political differences, brought forward by the death in July of 92-year-old president Beji Caid Essebsi.

He had been elected in the wake of the 2011 revolt that overthrew former dictator Zine El Abidine Ben Ali.

Publication of opinion polls has officially been banned since July, but one thing appears certain: many voters remain undecided, due to difficulties in reading a shifting political landscape.

“I am undecided between two candidates — I will decide in the polling booth,” smiled one citizen, Sofiene, who added “honest candidates don’t have much chance of winning”.

Some hopefuls have tried to burnish anti-establishment credentials in a bid to distance themselves from a political elite discredited by personal quarrels.

One key newcomer is Kais Saied, a 61-year-old law professor and expert on constitutional affairs, who has avoided attaching his bid to a political party.

Instead, he has gone door-to-door to drum up support for his conservative platform.

Another independent candidate is Defence Minister Abdelkarim Zbidi, a technocrat who is running for the first time.

However, he has the backing of Essebsi’s Nidaa Tounes party.

The crowded field has been narrowed slightly by the last-minute withdrawal of two candidates in favour of Zbidi: former political adviser Mohsen Marzouk and businessman Slim Riahi.

But Karoui’s detention, just 10 days ahead of the start of campaigning, has been the top story of the election.

A controversial businessman, Karoui built his appeal by using his Nessma television channel to launch charity campaigns, handing out food aid to some of the country’s poorest.

But his detractors portray him as a would-be Silvio Berlusconi, the former Italian premier who they allege partly owns his channel.

On Friday, an appeal to have the Tunisian mogul released from prison ahead of the election was rejected, his party and lawyers said, two days after he began what his defence team said was a hunger strike.

The polarisation between the different camps risks a derailment of the electoral process, according to Michael Ayari, an analyst for the International Crisis Group.

Isabelle Werenfels, a researcher at the German Institute for International and Security Affairs, has called the vote a democratic “test” because “it may require accepting the victory of a polarising candidate”, such as Karoui.

Distrust of the political elite has been deepened by an unemployment rate of 15 percent and a rise in the cost of living of close to a third since 2016.

Jihadist attacks have exacted a heavy toll on the key tourism sector.

Overseas voting stations for Tunisia’s sizeable expatriate population have been open since Friday.

Some stations will remain open until 6:00 P.M., while others will close two hours earlier, for security reasons.

Some 70,000 security agents will be deployed on Sunday, including 50,000 focused solely on polling stations, according to the interior ministry.

Exit polls are expected overnight Sunday into Monday, but preliminary results are not expected from the electoral commission until Tuesday.

The date of the second and final round has not been announced, but it must happen by October 23 at the latest and may even take place on the same day as legislative polls — October 6.

Those polls are supposed to be more significant, as Tunisia is an emerging parliamentary democracy.

But several candidates have called for presidential powers to be beefed up, despite years of dictatorship under Ben Ali.