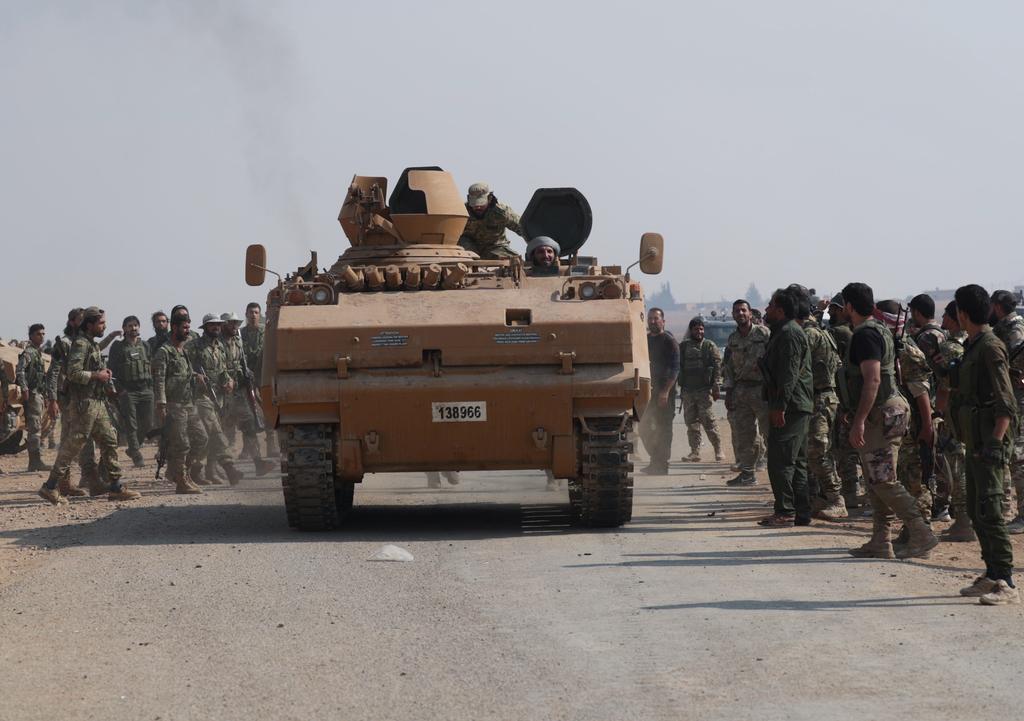 ISTANBUL/ANKARA (Reuters) – Turkey will clear northeast Syria of Kurdish YPG militia if Russia does not fulfill its obligations under an accord that helped end a Turkish offensive in the region, President Tayyip Erdogan said on Saturday.

Under the deal hammered out by Erdogan and Russia’s President Vladimir Putin, Russian military police and Syrian border guards are meant to clear the YPG fighters from within 30 km (19 miles) of the border over a period of six days ending on Tuesday.

From Tuesday, Russian and Turkish forces will start to patrol a narrower, 10-km strip of land in northeast Syria.

Ankara views the YPG as a terrorist organization linked to Kurdish insurgents in southeast Turkey. Its Syrian offensive, launched after President Donald Trump pulled out 1,000 U.S. troops from the area, drew criticism from Turkey’s NATO allies.

“If this area is not cleared from terrorists at the end of the 150 hours, then we will handle the situation by ourselves and will do all the cleansing work,” Erdogan said in a speech in Istanbul.

Russia has already warned the YPG that it will face the full force of Turkey’s army, the second biggest in NATO, if it fails to withdraw its fighters and weapons from the designated area in northeast Syria within the agreed deadline.

Erdogan also accused the European Union of lying because it had promised 6 billion euros ($6.7 billion) to help house and feed around 3.6 million Syrian refugees currently living in Turkey but had only provided half of that amount. Turkey has spent around $40 billion euros on the refugees, Erdogan added.

The president repeated an earlier threat to send the refugees to Europe if European countries failed to provide more financial support to help resettle them in a “safe zone” Ankara wants to establish on the Syrian side of the border with Turkey.

“If Turkey’s plans for the return (of the refugees)… is not supported, we will have no choice but to open our borders. We would open the borders, they can go to Europe,” he said.

Turkey’s NATO allies, including the United States, have criticized its military incursion in northeast Syria, fearing it will undermine the fight against Islamic State militants.

In a move sure to further infuriate Ankara, former prosecutor and UN investigator Carla del Ponte said in an interview published on Saturday that Erdogan should be investigated and indicted for war crimes over the incursion.

“For Erdogan to be able to invade Syrian territory to destroy the Kurds is unbelievable,” said del Ponte, a former Swiss attorney general who prosecuted war crimes in Rwanda and former Yugoslavia.

“An investigation should be opened into him and he should be charged with war crimes,” she told the Swiss newspaper Schweiz am Wochenende in an interview.

Ankara has long accused its Western allies of turning a blind eye to what it says is a serious security threat it faces from Kurdish militants based both inside Turkey and in Syria.

Foreign Minister Mevlut Cavusoglu defended Turkey’s record in Syria on Saturday, saying it was providing humanitarian aid to civilians there and would not tolerate any human rights violations in areas where its forces are operating.

Cavusoglu, speaking at a joint news conference with German Foreign Minister Heiko Maas, also said there was no question of forcibly returning refugees to Syria. Amnesty International this week said Turkey was repatriating some refugees against their wishes to what it said was still a conflict zone.

Ankara says more than 350,000 Syrian refugees have already voluntarily returned to their country.