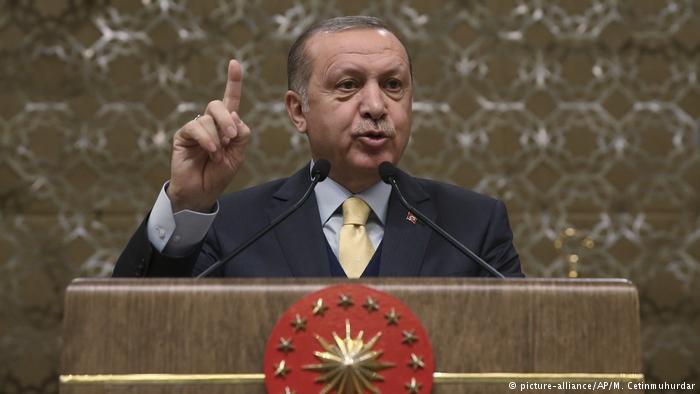 Turkish President Erdogan has insisted in an interview that Turkey should still join the EU. The comments came despite mounting pressure against the Turkish leader’s human rights record and his intervention in Syria.

Turkish President Recep Tayyip Erdogan told the Italian La Stampa newspaper in an interview that he still expects the European Union to eventually admit Turkey as a full member, stressing that “we won’t accept any other solution.”

“Turkey has done everything it needed to do to fulfill criteria for entry into the European Union,” Erdogan told the newspaper, adding that according to his view, the EU was responsible for blocking Turkey’s accession process by blaming the country for a lack of progress.

“I call on the EU to remove these artificial obstacles to our membership, and to be more constructive. Internal politics should not stand in the way of the accession process.”

Turkey’s ambitions to join the EU date back half a century, but accession talks only started in October 2005 while Erdogan was still prime minister.

However, out of the total of 35 chapters that need to be closed in order for Turkey to join the EU, only 16 have been opened with just one closed.

No new chapter has been opened since June 2016 – a month before a coup attempt in Turkey saw more than 270 people killed and Erdogan’s regime taking on an increasingly authoritarian tone as a result under emergency rule provisions.

Erdogan also said that he was “very disappointed” to see MEPs in the European Parliament in Brussels wearing emblems in support of the Kurdistan Workers’ Party (PKK) – even though most European states had labelled the PKK as a terrorist organization.

“I don’t speak to people who support terrorism. I only speak to those who fight it. I deal with terrorists like I’m dealing with them in Afrin; this is the only language they understand,” Erdogan said in the interview with La Stampa.

“The Turkish armed forces are not in Afrin to fight armed Kurdish groups. We don’t have problems with the Kurdish Syrians, we are only fighting terrorists, and we have the right to do it,” Erdogan insisted, while repeating that Turkey was not seeking territorial gains.

When reminded that the EU and the United States did not consider the YPG a terrorist organization and that they had supported the YPG in the fight against the “Islamic State” (IS), Erdogan bluntly told the interviewer:

The interview came shortly after details of a phone conversation between French President Emmanuel Macron and Erdogan were made public, in which the two leaders reportedly agreed to work on a “diplomatic road map” for an end to the seven-year war in Syria despite Turkey’s military involvement in the region.

“The two presidents agreed to work on a diplomatic road map for Syria in the coming weeks,” the Elysee Palace said.

“To that end, discussions between France and Turkey, which both hope for a political solution overseen by the UN, will increase in the coming days.”

Erdogan has sought to build a strong relationship with Macron not only over the issue of Syria but also to help him overcome his rocky relationship with the EU – despite the fact that Macron is among the European leaders who have openly rejected the prospect of Turkish EU membership, floating the idea of a partnership instead.

Hosting Erdogan on a visit to Paris in January, Macron had said that claiming there was any progress in Turkey’s accession process would amount to “hypocrisy.”

The partnership between France and Turkey is of strategic concern for Erdogan, as Turkey is in dire need of international support and goodwill, following its much-criticized incursion into Afrin.

Despite suffering its worst day of fighting, with seven Turkish soldiers dying on Saturday alone, Erdogan wants to press on with expanding Operation “Olive Branch,” saying that the incursion could expand beyond Afrin to the town of Manbij and possibly east of the Euphrates river.

The Turkish military claims it has killed nearly 900 YPG fighters during the operation so far.

Turkey's Erdogan at the Vatican: A visit at a difficult time