DUBAI, Jan 31 (Reuters) – The United Arab Emirates said on Monday it intercepted a ballistic missile fired by Yemen’s Iran-aligned Houthi movement as the UAE hosted Israeli President Isaac Herzog on his first visit to the Gulf business and tourism hub.

In the third such attack on the U.S.-allied Gulf state in the last two weeks, the Houthis’ military spokesman said they fired Zulfiqar missiles at Abu Dhabi and launched drones at Dubai. read more

He reiterated a warning to residents and firms to “stay away from vital headquarters and facilities” in the UAE, which prides itself as a safe business haven and global tourism destination.

The United States condemned the assault – which followed a Jan. 17 strike on a fuel depot in Abu Dhabi that killed three people – in an escalation of the Yemen war between the Houthis and a Saudi-led coalition, which includes the UAE.

U.S. President Joe Biden said his administration has been in “daily contact” with the UAE to address the threats.

The Pentagon said U.S. forces in the UAE activated Patriot missile defenses but that it was the Emirates’ surface-to-air interceptors that actually struck down the incoming missile. It left open the possibility of additional defensive military assistance.

“We continue to … explore opportunities to improve our defenses and the defenses of our Emirati partners as well,” Pentagon spokesman John Kirby told a news briefing.

A senior Emirati official described the attacks as “useless” provocations. “Those who test the UAE are mistaken,” the official, Anwar Gargash, said in a Twitter post.

The assaults have led to rare security jitters among some residents in a country where expatriates are a majority, but have had no visible impact on daily life, with restaurants and beaches packed during the peak mild winter season.

The UAE said the missile was intercepted at 20 minutes past midnight and its debris fell on an uninhabited area. 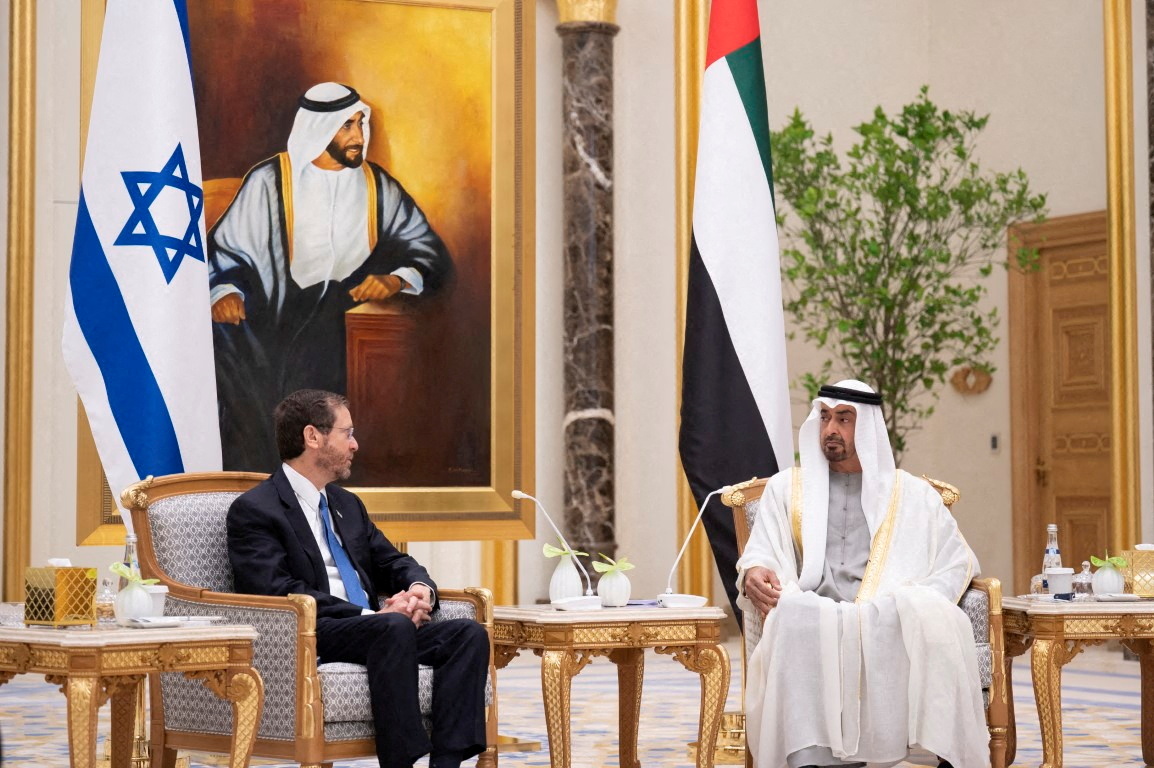 “While Israel’s president is visiting the UAE to build bridges and promote stability across the region, the Houthis continue to launch attacks that threaten civilians,” U.S. State Department spokesman Ned Price said in a tweet.

Herzog pressed on with his visit to Expo 2020 in Dubai.

He voiced hope more countries would normalize relations with Israel as the UAE did when it, along with Bahrain, forged ties in 2020 under U.S.-brokered pacts dubbed the “Abraham Accords.”

“There are only two alternatives for this region. One is peace, prosperity, cooperation, joint investments … or alternatively, what Iran is doing, which is destabilizing the region and using its proxies to employ terror,” Herzog later said in a statement issued by his office.

Herzog departed the UAE on Monday, seen off at an airport by Emirati foreign minister Sheikh Abdullah bin Zayed Al Nahyan, a video from the Israeli president’s office showed.

The accords have built a new axis between Israel and Sunni Muslim Gulf states based mainly on shared concerns over Shi’ite Iran, including its proxies and its ballistic missile program.

At the same time, the UAE has been engaging directly with Iran under de-escalation efforts driven by economic priorities. An Iranian business delegation is due to visit Expo in February.

The Saudi-led coalition accuses Iran of supplying arms to the Houthis, a charge both the group and Tehran deny. The Yemen conflict is seen as a proxy war between Saudi Arabia and Iran.

The Houthis have frequently carried out missile and drone launches on Saudi Arabia in the nearly seven-year war before expanding strikes on the UAE this month.

The UAE had largely ended its military presence in 2019 but Yemeni forces it arms and trains recently joined battles against the Houthis in key energy-producing regions. read more

The coalition has recently also carried out deadly air strikes on Houthi-held areas.