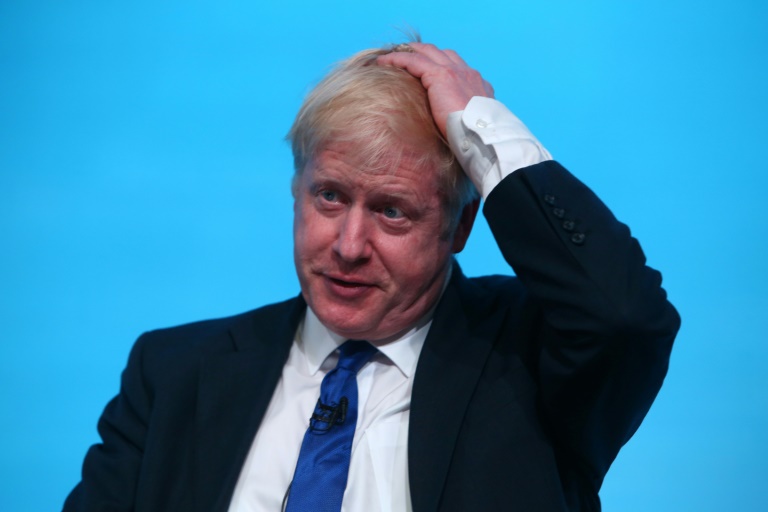 Boris Johnson stood accused Tuesday of having nothing to offer Britain but “blind optimism” as he and his rival for the premiership clashed over Brexit in a bad-tempered TV debate.

Johnson is the runaway frontrunner to replace Theresa May later this month, wooing voters with a promise to take Britain out of the European Union on October 31 whatever happens.

But in their first and only head-to-head debate, his rival Jeremy Hunt accused him of not being honest about the risks of leaving the bloc without a deal with Brussels.

“If we want to make a success of Brexit it’s not about blind optimism, it’s about understanding the details that will get us the deal that’s right for country,” said Hunt, the current foreign minister.

Johnson, a former London mayor who preceded Hunt at the Foreign Office, is known for his rhetoric and jokes but has been accused of having only a vague plan for office.

He retorted that “we’ve had a bellyful of defeatism”, saying he would help Britain “get back our mojo” and “off the hamster wheel of doom”.

Ballots have already been sent out to the 160,000 members of the ruling Conservative party who will decide the winner, with the result set to be announced on July 23.

A YouGov survey at the weekend suggested 74 percent of Tory members backed Johnson, but during the hour-long ITV programme, Hunt showed he would not give up without a fight.

He repeatedly interrupted and challenged Johnson, accusing him of failing to answer questions, including on whether he would resign if Brexit did not happen as promised.

Johnson, who enraged many in Brussels with his exaggerated claims about the EU during the 2016 Brexit referendum campaign, gave a characteristically flippant reply.

“I don’t want to hold out to the EU the prospect that they might encourage my resignation by refusing to agree a deal,” he said.

Cost of no deal

Both men insist they can renegotiate the divorce terms that May agreed with Brussels, but which parliament repeatedly rejected, forcing her to delay Brexit twice.

The EU says it will not reopen the text, and both Hunt and Johnson say they will leave the bloc with no deal if necessary.

Johnson said he would use the £39 billion allocated to settle Britain’s dues after four decades of EU membership to mitigate the impact, saying that with planning, a “no deal” exit would be “vanishingly inexpensive”.

He laid into Hunt for refusing to rule out a further Brexit delay, while he himself left open the option of suspending parliament if MPs tried to stop a “no deal” Brexit.

MPs had earlier on Tuesday voted to demand the government give them fortnightly updates about power-sharing in Northern Ireland between October and December, a device intended to thwart any suspension.

Johnson said that without a real threat of walking away, the EU “won’t take us seriously”, adding: “A deadline will deliver a deal.”

Brexit is the biggest challenge facing May’s successor and the major concern of most Tory party members.

But both Johnson and Hunt have also been drawn into a rare diplomatic row with Britain’s closest ally, the United States.

The leak at the weekend of unflattering diplomatic cables penned by Britain’s ambassador to Washington triggered a wave of angry tweets from President Donald Trump.

Hunt earlier said the president was “disrespectful and wrong” in his criticism of the UK government and the ambassador, Kim Darroch.

In the TV debate, Johnson condemned the leak of the cables, but refused to match Hunt’s promise to keep Darroch in post.

He emphasized his own ties with the White House, and said of Trump: “I don’t think it was necessarily the right thing for him to do… but our relationship with the US is of fantastic importance.”

Image: AFP/File / GEOFF CADDICK Boris Johnson is the runaway frontrunner to replace Theresa May later this month, but has been accused of having only a vague plan for office

Trump calls British ambassador to US 'a very stupid guy'

It's Brexit, stupid: the appeal of Boris Johnson