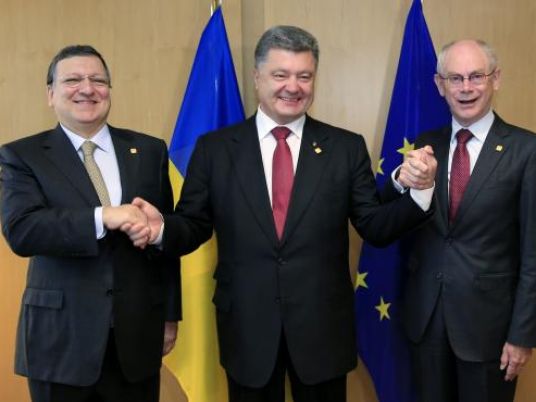 The Ukrainian and European parliaments on Tuesday simultaneously ratified a landmark pact at the heart of the ex-Soviet country's bloodiest crisis since independence.

The vote on an accord that decisively steers Ukraine towards the West came just moments after parliament agreed to offer limited self-rule to the pro-Russian east to try to end a bloody five-month separatists uprising.

But renewed deadly fighting in the east has heaped further pressure on a fragile truce, and raised new questions about whether President Petro Poroshenko will succeed in keeping his splintered country together.

Poroshenko said the adoption of the 1,200-page cooperation agreement with the European Union was Ukraine's first step towards membership of the 28-nation bloc.

"Tell me, who will now dare to shut Ukraine's doors to Europe?" the pro-Western leader said.

"Who will be against our future membership of the EU, towards which today we are taking our first but very decisive step?"

Lawmakers rose for a rousing rendition of the national anthem sung with their right hands solemnly placed on their hearts. European MPs in Strasbourg also all stood and cheered.

But the historic occasion was muted by the two sides' decision to bow to Russian pressure and delay until 2016 the implementation of a free trade deal that would pull Ukraine out of a rival union being built by the Kremlin.

The rejection of the same EU association agreement deal by Kremlin-backed president Viktor Yanukovych in November triggered the bloody chain of events that led to his February ouster and Russia's subsequent seizure of Ukraine's Crimea peninsula.

The decision by Kiev's new pro-Western leaders to still strike the agreement saw Moscow cut off gas supplies and allegedly orchestrate a separatist revolt in the industrial east that has now claimed more than 2,700 lives.

Russia's denials of involvement have not spared it from waves of punishing Western sanctions that have left President Vladimir Putin more isolated and acting less predictably than at any stage of his dominant 15-year reign.

But a European-mediated truce Kiev and Moscow clinched on September 5 has offered the first significant glimmer of hope that the crisis may at last be abating and allowing East-West tensions to mend.

Lawmakers in the 450-seat Verkhovna Rada parliament also Tuesday adopted a peace plan drafted by Poroshenko that offers three years of limited self-rule to parts of the rebel-held territory.

The measures give Poroshenko a big political boost ahead of his trip to Washington for crunch talks with US President Barack Obama on Thursday and a special appearance before the Congress.

The legislation also crucially guarantees the right for Russian to be used in all state institutions — a particularly sensitive issue in the war zone.

The Ukrainian leader argued Monday that his plan offered Kiev the best way out of the crisis because it guarantees "the sovereignty, territorial integrity and independence of our state".

But some political leaders and especially members of right-wing groups that played a small but instrumental role in protests that forced out the old regime, have questioned whether Poroshenko was ceding too much to Moscow.

The broad-ranging political proposals allow local legislatures in rebel-held regions to set up their own police forces and name judges and prosectors.

Snap local polls on December 7 will establish new councils in the areas in Ukraine's vital coal and steel belt that will seemingly not be accountable to Kiev in any way.

A separate law passed in the same closed-door hearing protects from criminal prosecution "participants of events in the Donetsk and Lugansk regions" — a measure that appears to apply to both the insurgents and Ukrainian government troops.

Amnesty International has accused fighters on both sides of abuses that might be classified as war crimes.

Yet the broader autonomy offer appears to have done little to sate insurgency leaders who want membership in Novorossiya — a charged term Putin uses to describe a tsarist Russia that incorporated parts of Ukraine.

Insurgency leaders and officials in Kiev have traded blame daily for who was responsible for repeatedly breaking the ceasefire.

Local authorities said four civilians were killed in separate shelling incidents in Donetsk and another in the neighbouring village of Makiivka — bringing the total number to 10 in two days.

Kiev said at least three Ukrainian soldiers were also killed Monday in a new rebel advance toward the long-shuttered Donetsk airport that had been one of the war's main flashpoints since Poroshenko's election at the end of May.

Western allies kept up the pressure by launching more than a week of US-led NATO war games in western Ukraine on Monday that are meant to send a blunt message to Russia about having any thoughts of pushing its troops deeper into the former Soviet state.

Russia has tens of thousands of soldiers in Crimea but denies NATO charges it sent more than 1,000 elite forces to help the militias launch a surprise counter-offensive at the end of last month.