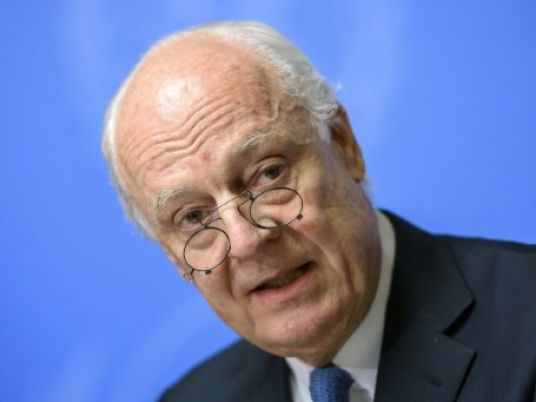 The United Nations and other parties to Syrian peace efforts on Sunday softened any expectations of a major breakthrough at UN-led talks in Geneva next week, with US policy on the crisis in disarray and its ties with Russia unclear.

UN envoy Staffan de Mistura told the Munich Security Conference the lack of a clear US position made resolving the complex issues of the six-year civil war far more complicated than his earlier mediation efforts for Iraq and Afghanistan.

"I can't tell you [if it will succeed], but we have to push with the momentum. Even a ceasefire cannot hold too long if there is no political (solution)," he said, referring to the shaky ceasefire brokered by Russia and Turkey in the Kazakh capital Astana.

Questions abound over Washington's approach to ending the war, even after the first international foray by members of US President Donald Trump's foreign policy team. It remains unclear if Trump will make good his promise to build closer ties to Russia, especially in the fight against Islamic State.

"One thing I’m missing at the moment … is a clear US strategy,” de Mistura told delegates. "Where are the United States [on a political solution]? I can’t tell you, because I don’t know.”

The UN-led intra-Syrian talks will resume in Geneva on Thursday after de Mistura broke them off almost nine months ago following several rounds that led ultimately to an escalation of violence.

President Bashar al-Assad is in his strongest position since the early days of the civil war, which began as a popular uprising in the spring of 2011 before spiraling into a war that has killed up to 400,000 combatants and civilians.

He told French media last week that he deemed all those fighting him to be terrorists, signaling that the government delegation is likely to remain steadfast in the Geneva talks.

US officials have ruled out cooperating with Russia militarily until it has persuaded Damascus to take a broader view, European diplomats said last week.

De Mistura said the talks will focus on a new constitution, free and fair elections administered under supervision of the United Nations, and transparent and accountable governance.

Several delegates questioned him on why the U.N. was no longer using the phrase "political transition" to describe the goals of the talks. The opposition considers the term to mean a removal of Assad or at least an erosion of his powers.

De Mistura did not answer directly, but said he remained focused on UN Security Council resolution 2254, with its focus on governance, a new constitution and elections.

Syrian National Coalition President Anas al-Abdah said it was clear that Assad had to go. "We cannot address the profound security threats … while Assad remains in power," he said.

The United States, Gulf Arab states and Turkey back rebel forces but the situation is complicated by the role of hardline Islamist factions, including Islamic State, in the anti-Assad movement opposed by both Washington and Moscow.

US envoy Brett McGurk said the administration was doing a full review of its Syria policy that is due to be completed in the coming weeks, but cautioned against setting expectations too high.

"I don’t think the US will come in with a one-size fits all solution because there isn’t one," McGurk told delegates to the annual security conference.

"We will be selfish about advancing our interests. Number One we have to defeat Daesh. It is a significant threat to all of us. Right now Daesh is sitting in Raqqa and it is where they are planning major attacks against all of us."

Kenneth Roth, executive director of Human Rights Watch, called for urgent efforts by other states, warning that the Syrian government could repeat brutal tactics seen in the siege of Aleppo.

"God help the Syrian people if we are waiting for Donald Trump to provide the solution,” he said. "It is incumbent on all of us to step forward while the US is in disarray."