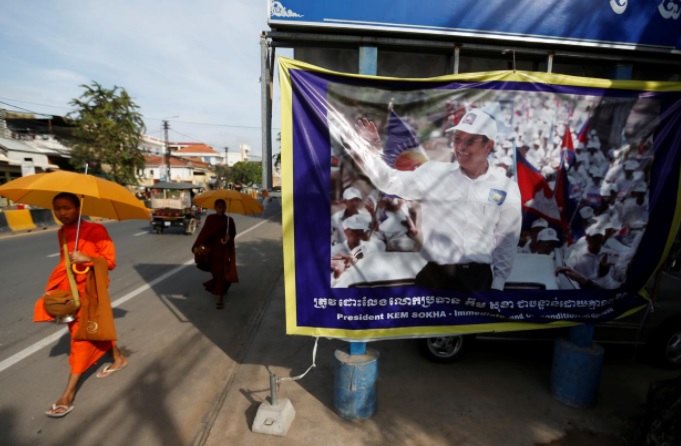 The United States cut back aid to Cambodia Tuesday to protest shrinking democracy in the Southeast Asia nation, where the party of longtime ruler Hun Sen swept Senate elections after facing no serious opposition.

The White House said it was suspending or curtailing US programs worth $8.3 million that support Cambodia’s tax department, local government and military. The US has already restricted visas to Cambodians who are “undermining democracy” — a response to Hun Sen’s crackdown on media and main opposition party, which was dissolved in November.

Spokeswoman Sarah Huckabee Sanders said the US has provided more than $1 billion in assistance to Cambodia over the last quarter-century, but was compelled to review its assistance “to ensure that American taxpayer funds are not being used to support anti-democratic behavior.” Sunday’s Senate elections didn’t represent the will of the Cambodian people, she said.

The ruling Cambodian People’s Party claimed victory in all 58 of the seats that were voted on by the country’s 11,572 commune councilors. The vote was seen as a foretaste of a scheduled July general election for the National Assembly that is also expected to affirm Prime Minister Hun Sen’s three-decade rule.

The only opposition party in parliament, the Cambodia National Rescue Party, was dissolved after politicized courts sustained the government’s legal challenges. Party leader Kem Sokha was arrested in September and accused of trying to overthrow the government with US support, which Washington denies. Kem Sokha has been charged with treason and held without bail.

On Tuesday, a Cambodian court ordered the seizure of the party’s headquarters. A lawyer for Hun Sen said a municipal court in the capital Phnom Penh ordered the seizure because the party’s exiled former leader, Sam Rainsy, failed to pay a $1 million judgment against him for defaming the prime minister and compensation to another ruling party leader. Sam Rainsy is the owner of the property.

Monovithya Kem, an opposition spokeswoman and Kem Sokha’s daughter, praised the Trump administration’s action for showing the world won’t stand by as “twenty-plus years of investment into Cambodia’s democracy is flushed away.”

The European Union is also weighing sanctions on senior officials in Cambodia. EU foreign ministers on Monday urged restoration of democracy and government dialogue with the opposition, warning the bloc may consider “targeted measures” if the situation doesn’t improve.

Hun Sen has dominated Cambodia since the mid-1980s after it emerged from the genocidal rule of the Khmer Rouge. The United States and key European powers were among the sponsors of UN-backed accords in the early 1990s that helped ushered in democracy. But Hun Sen has used brute force and politicking to maintain control since then.

The White House said the US will continue projects supporting the Cambodian people, including those promoting health, agriculture, mine clearance and civil society promotion. In the last fiscal year, the US planned $88.5 million in aid to Cambodia.

A National Security Council spokesperson said the Department of Taxation was targeted for opening politically-motivated tax investigations against independent media outlets and civil society groups, in some cases forcing their closure. Military assistance is being hit because senior Cambodian military leaders have made troubling statements about using violence in relation to elections.