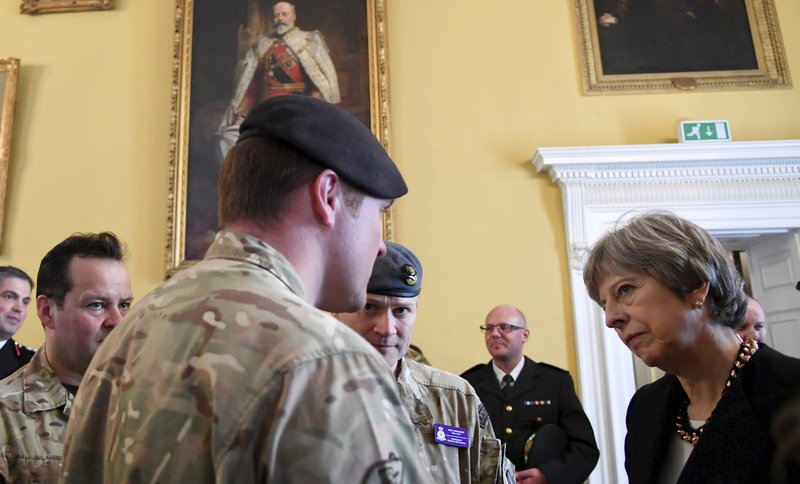 The United States, France and Germany joined Britain on Thursday in condemning Russia for the nerve-agent poisoning of a former spy, calling it an “assault on UK sovereignty,” as the Kremlin vowed to expel British diplomats soon in response to London’s moves against Moscow.

Britain says blame for the poisoning of Sergei Skripal and his daughter in the English city of Salisbury lies with the Russian state. Prime Minister Theresa May responded by expelling 23 Russian diplomats, severing high-level contacts with Moscow and vowing to take both open and covert actions against Russian dirty money and “hostile state activity.”

In a rare joint statement, May and US President Donald Trump, French President Emmanuel Macron and German Chancellor Angela Merkel said “there is no plausible alternative explanation” to Russian responsibility for the poisoning.

“This use of a military-grade nerve agent, of a type developed by Russia, constitutes the first offensive use of a nerve agent in Europe since the Second World War,” the leaders said, calling it “an assault on UK sovereignty” and “a breach of international law.”

Trump, who has often been reluctant to criticize Russian President Vladimir Putin, said it “certainly looks like the Russians were behind it.”

Trump spoke to reporters at the White House after his administration announced new sanctions on Russian entities for alleged meddling in the 2016 US presidential election.

The four-nation statement is the fruit of British efforts to enlist international support as it tries to hold Russia accountable for the March 4 attack that left the former Russian agent and his daughter in critical condition and a British police officer seriously ill.

Russia denies being the source of the nerve agent that poisoned the Skripals and has demanded Britain share samples collected by investigators. Britain says the poison used was Novichok, a class of nerve agent developed by the Soviet Union toward the end of the Cold War.

Deputy Foreign Minister Sergei Ryabkov said Russia had halted all chemical weapons research after joining the Chemical Weapons Convention that came into force in 1997, and completed the destruction of its stockpiles last year.

The poisoning has sparked a war of words from senior politicians in London and Moscow, increasing tensions between the two countries.

Lavrov said Britain’s “boorish and unfounded” accusations against Russia were intended to distract public attention from the troubled path toward Brexit.

He accused Britain of fanning “anti-Russian rhetoric bordering on hysteria.”

“They are trying to rely on political rhetoric, on Russophobia in the hope that the entire Western world lines up behind them,” he said.

British Defense Secretary Gavin Williamson called relations between the two countries “exceptionally chilly” and said Russia should “go away and shut up.”

Maj. Gen. Igor Konashenkov, a spokesman for the Russian Defense Ministry, shot back that Williamson’s comments reflected a “high degree of his intellectual impotence,” adding: “The boorish language is apparently the only thing left in the British military arsenal.”

British Foreign Secretary Boris Johnson said Russia targeted Skripal — a former Russian intelligence officer convicted of spying for Britain — to make it clear that those who defy the Russian state deserve to “choke on their own 30 pieces of silver.”

“The reason they’ve chosen this nerve agent is to show that it’s Russia, and to show people in their agencies who might think of defecting or of supporting another way of life, of believing in an alternative set of values, that Russia will take revenge,” Johnson told the BBC.

The British prime minister visited Salisbury on Thursday, viewing the site where the Skripals were found critically ill on a park bench. It is now a scene of police tape and forensic tents, one of several scattered across the quiet cathedral city as police, supported by troops with chemical-weapons training, try to discover how and where the poison was administered.

May met with police and medics and spoke with the hospitalized police officer, Detective Sgt. Nick Bailey.

British measures against Russia included scrapping an invitation for Lavrov to visit and withdrawing UK ministers and royals from the soccer World Cup this summer in Russia — although the England team will still compete.

May said Britain would also clamp down on murky Russian money and strengthen the government’s ability to impose sanctions on those who abuse human rights, although she gave few details.

Britain is also trying to build a unified Western response, saying the attack in Salisbury is just the latest example of Russia’s disregard for the rule of law.

In their statement, Trump, Macron, Merkel and May cited “a pattern of earlier irresponsible Russian behavior” and called on Russia to disclose details of its Novichok program to the Organization for the Prohibition of Chemical Weapons.

“We call on Russia to live up to its responsibilities as a member of the UN Security Council to uphold international peace and security,” they said.

The leaders did not say what, if any, actions they would take if Russia does not comply.

At the White House, Trump said the nerve-agent attack is “something that should never ever happen.”

“We’re taking it very seriously as I think are many others,” he said.