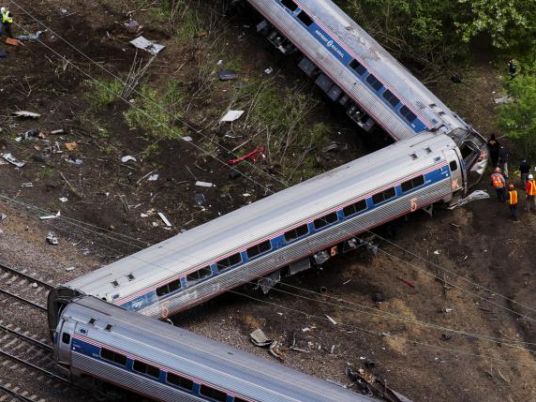 Federal investigators probing the deadly Amtrak derailment in Philadelphia were waiting to interview the train's engineer, whose attorney said on Thursday he did not remember the crash that killed seven people and injured more than 200 others.
The train bound for New York City from Washington was barreling into a curve at more than 100 miles per hour on Tuesday night, twice the speed limit, when the engineer hit the brakes, the National Transportation Safety Board (NTSB) said.
Investigators were studying forward-facing video taken from the train, testing brake systems and doing three-dimensional imaging of two derailed cars, NTSB member Robert Sumwalt said in an interview on Thursday.
They have not yet interviewed the engineer, identified as Brandon Bostian, of Queens, New York, to give him time to recover from a concussion.
The office of Philadelphia District Attorney Seth Williams is looking to determine whether to press criminal charges against Bostian and whether local charges were the proper jurisdiction, a spokesman said.
"We are gathering information and are still in the preliminary part of fact-finding," spokesman Cameron Kline said.
Sumwalt said the derailment could have been avoided by an advanced safety system called "positive train control (PTC)," which automatically slows or halts trains moving too fast or heading into a danger zone.
By law, the rail industry must adopt the technology by the end of this year. Amtrak has begun installing components of the PTC system but the network is not yet functioning, federal officials said.
"It's tragic to investigate an accident. It's even more tragic to investigate and not to see those recommendations that we called for because we know they can prevent accidents," Sumwalt told Reuters.
Application of the emergency brakes slowed the train slightly to 102 mph (164 kph) in the seconds before the locomotive and all seven passenger cars derailed, Sumwalt said.
Appearing on ABC's "Good Morning America," Bostian's lawyer, Robert Goggin, said his client had no memory of the crash and "no explanation" for what happened.
“He remembers coming into the curve, he remembers attempting to reduce speed, but thereafter he was knocked out just like all the other passengers on the train,” Goggin said.
Bostian, who has a concussion and gash to his head, does not remember deploying the emergency brakes, the lawyer said.
“I believe as a result of the concussion, he has absolutely no recollection whatsoever of the event," Goggin said. "We will have to wait for his memory to come back or for other facts to be ascertained by the NTSB."
The NTSB's Sumwalt told Reuters investigators want to talk to Bostian "as soon as he's available."
"It's not that uncommon at all to not remember things" after such a traumatic event, he said.
Bostian was cooperating with authorities, his attorney said.
A University of Missouri graduate with a business degree, Bostian has worked as an Amtrak engineer for more than four years and previously was a conductor for the railway, according to his LinkedIn page.
Dr. Herbert Cushing, chief medical officer at Temple University Hospital which is treating the injured, said at a media briefing that many were improving and likely would go home on Thursday.
Eight of the injured remained in critical condition, while most suffered broken bones, he said.
Rail service along Amtrak's Northeast Corridor, the country's busiest with 12 million passengers a year, was disrupted after the accident, leaving travelers scrambling for alternatives.