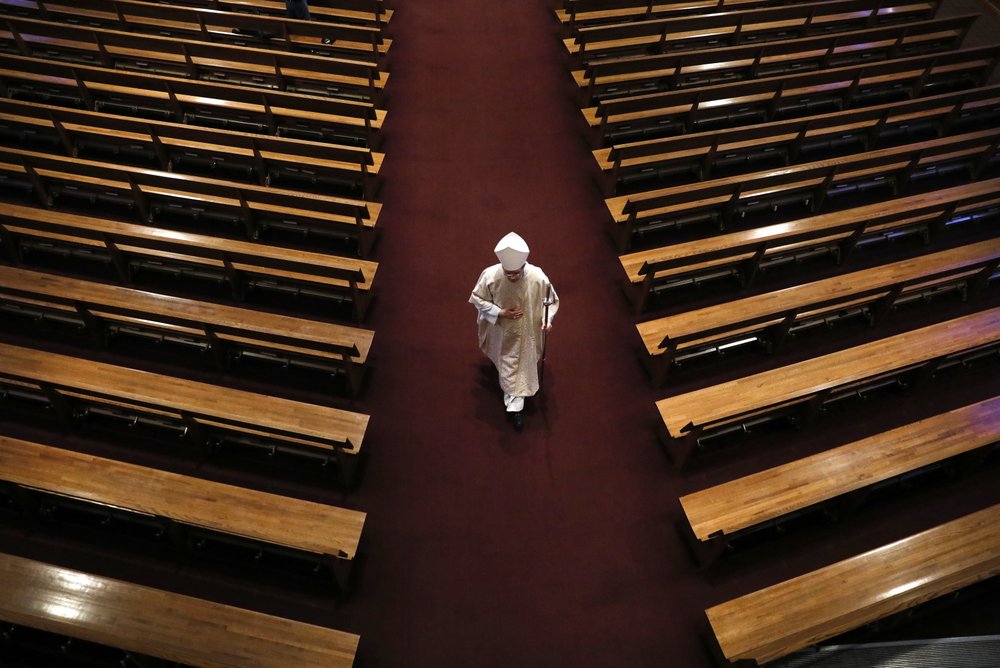 NEW YORK (AP) — A staggering 16.8 million Americans lost their jobs in just three weeks, a measure of how fast the coronavirus has brought world economies to their knees. Meanwhile, religious leaders worldwide Thursday urged people to celebrate Good Friday and Easter from the safety of their homes.

Numbers released Thursday by the US government showed that 6.6 million workers applied for unemployment benefits last week, on top of more than 10 million in the two weeks before that. That amounts to about one in 10 American workers — the biggest, fastest pileup of job losses since the world’s largest economy began keeping records in 1948.

And still more job cuts are expected. The US unemployment rate in April could hit 15 percent — a number not seen since the end of the Great Depression.

Sharon Bridgeman, 57, of Kansas City, Missouri, was laid off from her job two weeks ago at a nonprofit that helps homeless people and is still waiting to be approved for unemployment benefits.

“I’m worried I may not have a job to go back to,” she said. “I’m also worried about the people I work with.”

President Donald Trump brushed off fears the economy won’t quickly rebound after the crisis, as he has predicted, saying he had a “strong feeling” that “the economy is going to do very well.”

Trump said he had met with his treasury and transportation secretaries about helping support airlines and that he likely would put out a proposal over the weekend.

The US Federal Reserve announced it will provide up to $2.3 trillion in loans targeted toward both households and businesses.

In many European countries, where social safety nets tend to be stronger than in the US, government programs that subsidize workers’ pay are keeping millions of people on payrolls, though typically with fewer hours and at lower wages.

Governments from the 19 countries that use the euro agreed Thursday on a package of measures that could provide more than a half-trillion euros (US$550 billion) for companies, workers and health systems to cushion the economic impact of the outbreak.

The head of the International Monetary Fund warned that the global economy is headed for the worst recession since the Depression. The United Nations’ labor organization said the equivalent of 195 million full-time jobs could be lost in the second quarter, while the aid organization Oxfam International estimated half a billion people worldwide could be pushed into poverty.

Dr. Anthony Fauci, the top US infectious-diseases expert, shot down hopes that warmer spring weather would bring an end to the crisis.

“One should not assume that we are going to be rescued by a change in the weather,” he said. “You must assume that the virus will continue to do its thing.”

Amid widespread restrictions on public gatherings, major religious denominations are holding virtual services where members can watch on TV or online. Others are arranging prayer at drive-in theaters, where people can stay in their cars.

Other churches plan to move ahead with services, especially in states like Texas, where the governor declared religious gatherings “essential services.” A Houston church has installed hand-washing stations and rearranged its 1,000-person sanctuary to hold about 100 people spaced six feet (two meters) or more apart.

Pope Francis will celebrate Easter Mass in a nearly empty St. Peter’s Basilica instead of the huge square outside. In England, the Archbishop of Canterbury will deliver his Easter sermon by video.

Iran’s Supreme Leader Ayatollah Ali Khamenei suggested mass gatherings may be barred through the holy Muslim fasting month of Ramadan, which runs from late April through most of May.

Meantime, there were encouraging signs in France, where the national health agency saw indications the crisis is stabilizing, though more than 12,000 lives have been lost.

New infections, hospitalizations and deaths have been leveling off in hard-hit Italy and Spain, which together have around 33,000 deaths, but the daily tolls are still shocking. Spain reported 683 more dead, bringing its total to more than 15,200. Britain recorded 881 new deaths, for close to 8,000 in all.

Japan recorded more than 500 new cases for the first time, a worrisome rise since it has the world’s oldest population and COVID-19 can be especially serious in the elderly.

For most, the virus causes mild to moderate symptoms like fever and cough. But for some, especially older adults and the infirm, it can cause pneumonia. About 350,000 people have recovered, by Johns Hopkins’ count.

Image: Bishop William Joensen proceeds down the main aisle at the conclusion of Holy Thursday Mass in a near empty St. Ambrose Cathedral, Thursday, April 9, 2020, in Des Moines, Iowa. COVID-19 causes mild or moderate symptoms for most people, but for some, especially older adults and people with existing health problems, it can cause more severe illness or death. (AP Photo/Charlie Neibergall)