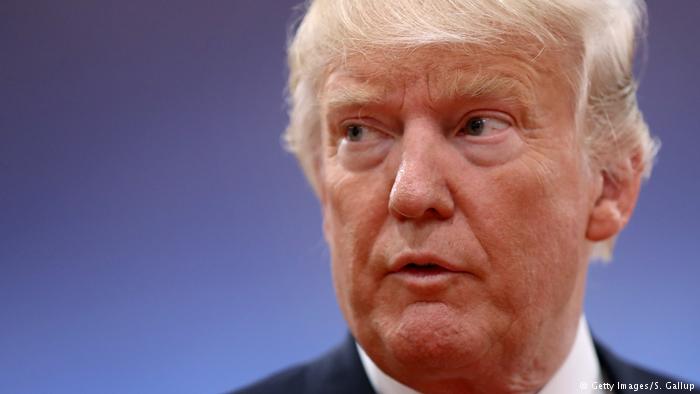 In a short statement, President Trump spoke of the need for healing and fighting mental health problems but did not mention guns. The shooting was the fifth deadliest in US history.

Addressing the nation from the Diplomatic Room of the White House, US President Donald Trump spoke “to a nation in grief.” He slowly described the murder of defenseless children and the fact that police immediately responded to reports of gunfire. That was the only time the word gun was uttered in the seven-minute speech.

Instead, Trump spoke of the tragedy visited upon victims and their families as well as the larger community of Parkland, Florida, “a great and safe community.” The president told victims’ families that the nation was praying for them “with one heavy heart.”

‘We are here for you’

He thanked local police and first responders then reiterated a previous tweet by repeating the phrase that “no child, no teacher should ever be in danger in an American school.” He promised, “We are here for you, whatever you need, whatever we can do to ease your pain.”

Quoting scripture, he implored those in need of help to confide in teachers, law enforcement and religious leaders. He also urged Americans to “answer hate with love, cruelty with kindness.” He stressed the idea of a larger American family throughout the address and urged students to reach out to one another.

‘The difficult issue of mental health’

Trump announced he would travel to Florida to meet with victims’ families and that he would “continue coordinate the federal response.” He also pledged that the federal government was “committed to working with state and local leaders to help secure our schools and tackle the difficult issue of mental health.” He talked about the importance of making a difference, not simply taking actions that “make us feel as if we are making a difference.”

Other politicians have addressed the shooting over the hours since it happened but this was Trump’s first public statement on the incident.

President Trump did not take questions after delivering his remarks.

In what has become a sad ritual, Democrats repeated their calls for finally dealing with access to firearms, conducting studies on gun violence and the creation of a select committee on gun violence. Senator Chris Murphy, a Democrat from Connecticut said that Congress’ inaction was to blame for mass atrocities such as that in Florida.

Republicans continued to avoid the issue of guns, preferring to point to mental health issues as the real problem. Kentucky Governor Matt Bevin, whose state was the site of a school shooting in January, said that ego-shooter video games were to blame. He said that such games were like “pornography” and an abuse of freedom of speech.