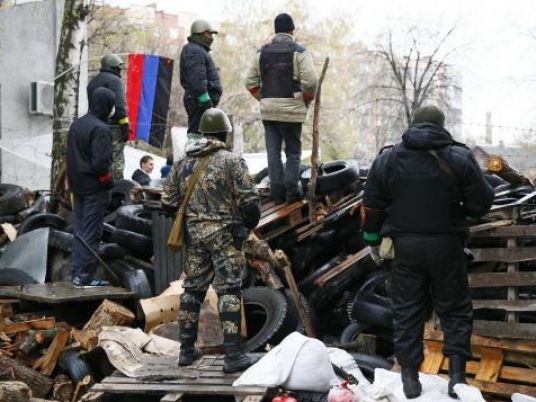 The United States said on Friday it was prepared to impose further targeted sanctions on Russia over its actions in Ukraine and that European leaders had agreed to coordinate on steps to make Moscow pay.

The crisis escalated when armed pro-Russian separatists in the eastern city of Slaviansk seized a bus carrying international mediators. A separatist leader said the mediators were believed to have a Kiev "spy" amongst them.

The White House said US President Barack Obama and European allies all felt that Russia had escalated tension in eastern Ukraine, where pro-Moscow separatists have refused to leave official buildings they have occupied.

But it gave no details of what the sanctions might be, or when it planned to enact them.

Ukraine sent troops to try to dislodge the separatists from Slaviansk on Thursday, killing up to five rebels in what it said was a response to the kidnapping and torture of a politician found dead on Saturday.

Special forces launched a second phase of their operation on Friday by mounting a full blockade of Slaviansk, the rebels' military stronghold, an official on the presidential staff said.

One of its military helicopters was hit by rocket fire and exploded while on the ground at an airport near the city, the Defence Ministry said.

Pro-Western leaders in Kiev, who took power in February after Moscow-ally President Viktor Yanukovich fled following mass protests against him, say the rebels are being directed by Moscow. Russian troops seized Crimea soon after Yanukovich fled.

The standoff has led to heavy capital flight from Russia, prompting credit rating agency Standard & Poor's to cut the country's ratings on Friday. That forced Russia's central bank to raise its key interest rate to reverse a drop in the ruble.

Russia's foreign minister, Sergei Lavrov, accused authorities in Kiev of waging "war on their own people".

"This is a bloody crime, and those who pushed the army to do that will pay, I am sure, and will face justice," Lavrov said.

The Kremlin says it has the right to defend Russian speakers anywhere if they are under threat and has deployed extra troops on the border with Ukraine, which NATO says number up to 40,000.

They began military exercises on Thursday and Ukraine said they had approached to within 1 kilometer (1,100 yards) of its border and that it would treat any incursion as an invasion.

Ukraine's acting president accused Moscow of supporting "terrorism at the state level" against his country for backing the rebels, who it blames for the politician's murder.

Interior minister Arsen Avakov insisted every care was being taken to avoid non-combatant casualties, after Moscow warned it may act if Kiev used the army against civilians.

The White House statement came after Obama pressed four European leaders on the need for more robust action against Russia. Europe is reluctant to impose tough sanctions due to its reliance on Russian gas and trade ties with Moscow.

"The president noted that the United States is prepared to impose targeted sanctions to respond to Russia's latest actions," it said.

"The leaders agreed to work closely together, and through the G7 and European Union, to coordinate additional steps to impose costs on Russia."

Britain agreed the current sanctions would need to be extended given what it said was Russia's refusal to support an international peace agreement that it signed up to last week under which all sides agreed to work to disarm illegal groups.

German Chancellor Angela Merkel said the leaders would have to react. "Because of the lack of progress we will have to contemplate further sanctions," she said before the call.

France said only that sanctions had been discussed and the leaders had called for a "speedy reaction" to the crisis from leading industrial nations, while Italy said they had agreed on the situation.

"The leaders underscored that Russia could still choose a peaceful resolution to the crisis, including by implementing the Geneva accord," the White House statement said.

Lavrov said Moscow was committed to implementing the Geneva agreement but accused Washington of distorting it with "one-sided demands". However, Russia's Defence Ministry said it was ready for "unbiased and constructive" talks with the United States to stabilize the situation.

Obama accuses Moscow of sending agents to coordinate the unrest in the east, as it did before seizing Ukraine's Crimea region in February.

US Secretary of State John Kerry said Russia was using propaganda to hide what it was trying to do in eastern Ukraine – destabilize the region and undermine next month's Ukrainian presidential elections – and decried its "threatening movement" of troops up to Ukraine's border.

Russian President Vladimir Putin has scoffed at the sanctions so far imposed, which have been limited to travel bans and overseas assets freezes on individuals.

Ukraine's Prime Minister Arseny Yatseniuk said Russia wanted to start World War Three by occupying the country and creating a conflict that would spread to the rest of Europe.

Seven people were injured overnight at a pro-Ukrainian checkpoint near the Black Sea port of Odessa when an explosive device blew up, police said on Friday.

Residents have built several such checkpoints near the town aimed at stopping pro-Russian separatists entering from Moldova's breakaway territory of Transdniestria.

Though the direct financial impact of sanctions has been limited, Russia's economy is being damaged by the crisis.

Central bank data released earlier this month showed an estimated $63.7 billion in net capital outflows in the first three months of 2014, the same as for the whole of 2013. The World Bank has said this year's total could reach $150 billion.

Russia's central bank then raised its key interest rate by 50 basis points to 7.5 percent – the second rise in two months – to address the currency weakness, which it said was raising inflation expectations.

Though the ruble briefly firmed after the rate hike, it gave up all its gains and was last down 0.7 percent on the day at 36.02 to the dollar. Russia's MICEX stock index fell 1 percent.

Analysts said other rating agencies were likely to follow suit, and the currency, which has already lost nearly 9 percent against the dollar this year, could keep falling.