Beaten by his brother because of his sexual orientation while growing up in Iran, Ramtin Zigorat's greatest wish is to wake up one day and to not have to look over his shoulder.

The 27-year-old gay rights activist, currently living in Turkey, was on the road to a new life in the United States, but his dream was derailed in January after US President Donald Trump introduced an immigration executive order that included a suspension of refugee arrivals from Iran and six other countries.
A revised version of the order issued on Monday will not rectify his predicament. It exempts Iraq and lawful permanent residents from the ban, but still bars citizens from Iran and five other majority-Muslim countries from entering the US for 90 days. Refugees from those countries are barred for 120 days while officials review already stringent vetting measures. 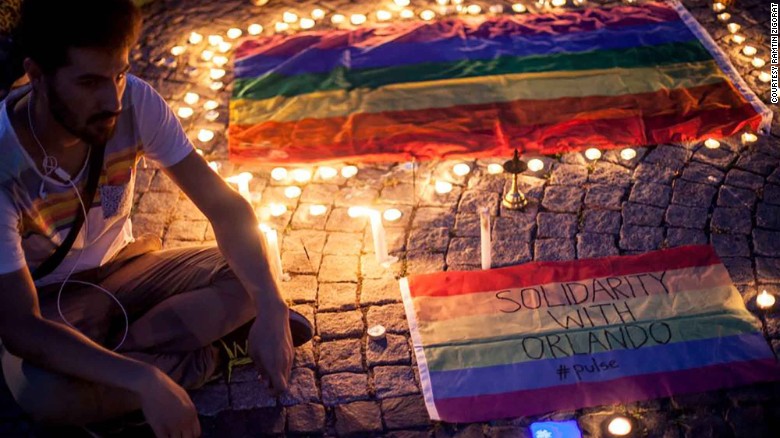 Zigorat at a candlelight vigil in solidarity with Orlando shooting victims
In Iran, Zigorat's doctor pushed him towards medication for what was described as his "condition" and recommended sex reassignment surgery, a legal option in a country where being gay is illegal, and often considered the same as being transgender. When he refused to renounce his sexual orientation and LGBT activism, he was arrested and sentenced to death in 2013.
Since escaping to Turkey nearly two years ago, Zigorat, who does not use his given name out of fears for his safety, registered with the UN's refugee agency, UNHCR, which offered him resettlement in the US.
"I was happy because I would be going to a country that has laws and rules," he told CNN. "No one would discriminate against me because of my sexuality."
After the introduction of Trump's travel ban, Zigorat's second interview for a US visa was abruptly canceled. No reason was given. He says his case is on hold, apparently frozen indefinitely, according to the resettlement agency.
In Turkey, Zigorat has found a temporary reprieve from a death sentence in Iran, but it is by no means a safe haven.
"In Turkey, the state is not against you legally but culturally it is the same as Iran," says Zigorat.
He says he lives in fear for his life, has been beaten up five times and was fired from his job when his bosses discovered his sexual orientation.
According to the UNHCR, there are 1,900 LGBT refugees like Zigorat in Turkey, but LGBT rights groups estimate the number to be much higher as many refugees are afraid to open up about their sexual orientation or gender identity.
In 2015, Istanbul's pride marchers were met with rubber pellets and pepper spray. A year later, the rally was banned by authorities who cited security fears. Those who did assemble faced the same treatment as the previous year.
Hayriye Kara, a lawyer and refugee program coordinator at one of Turkey's oldest LGBT associations, Kaos GL, says non-Turkish LGBT nationals face multiple layers of discrimination.
"Being LGBT is coupled with xenophobia and racism," she told CNN. "We cannot expect LGBT refugees to be safe here."
Kara says LGBT refugees are vulnerable throughout the country; she has interviewed refugees who have reported facing physical violence and harassment.
"LGBT refugees come to this country having lived through so much trauma and they are traumatized again here," she says. "They cannot access effective psychological help, even when LGBT associations provide it, because they lack the time or the space for it."
Turkey's Interior Ministry didn't return CNN's request for comment.
The UNHCR has only been able to resettle non-Syrian LGBT refugees in a handful of countries. Two, Australia and Canada, recently restricted their intake sharply, so in practice, the US was one of the few remaining safe havens.
The UNHCR says it is continuing to work with the US government and expects the impasse to be overcome.
"We very much hope the US will continue its strong leadership role and long tradition in protecting those who are fleeing persecution," UNHCR spokeswoman Selin Unal told CNN by text message.
"We cannot afford to lose hope. These people are very vulnerable and need our help to find solutions for them."
A US State Department official told CNN that the US considers refugees for resettlement based upon vulnerability on a case-by-case basis.
Individuals are considered on a wide array of factors including, but not limited to, female-headed households, individuals in need of medical care that cannot be obtained elsewhere, survivors of torture, individuals with special needs, and LGBT individuals. However, the US does not classify all LGBT refugees as any more vulnerable than other refugees, the official said.
Zigorat checks his resettlement status daily online and says he will not give up on his dream.
He believes Trump's administration would change its rhetoric if it were aware of the struggles people like him face.
"What would I say to President Trump? To appeal to him?" he asks.
"Please see our problems and please don't see us as problems because of our country. Our families rejected us, the second country didn't help us. Please help."
As Zigorat waits for news, life in Turkey remains dangerous for him and other LGBT refugees.
In 2016, a Syrian friend, Wisam Sankari, was beheaded in Istanbul a year after arriving in the city. Wisam's friends told LGBT association Kaos GL that his body was so badly mutilated they could only recognize him by his pants.
Also in 2016, a Syrian transgender woman was stabbed to death in her Istanbul home.
Others have killed themselves.
"Maybe they will kill me tomorrow," Zigorat says. "You always live with this fear."
Tags
gay rights homophobia Iran LGBT refugees LGBT rights Middle East Muslim ban muslims travel ban Turkey