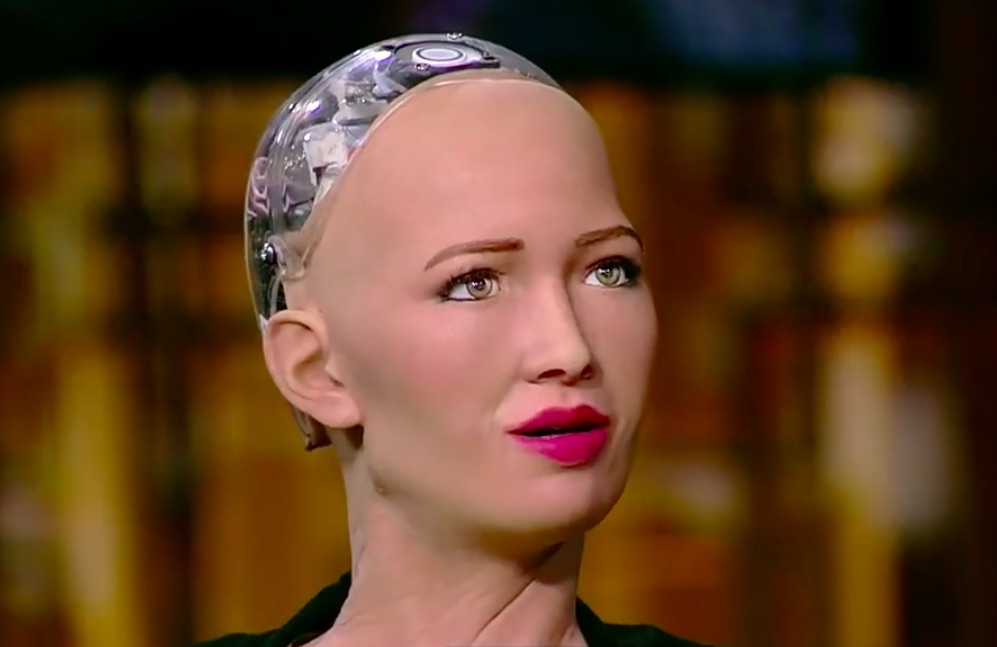 Since her first public appearance in 2015, Sophia, a social humanoid robot, made an impact all over the world. With her impressive interaction skills and witty comebacks, the robot as been a key speaker at several organizations, perhaps most notably the United Nations. However, a new development has taken place: Sophia just sat down for her first interview in the Middle East.

Last night, Sophia sat down with television host Ossama Kamal on DMC television channel for an interview, where they addressed a variety of issues from world peace to football. Sophia began the interview saying she loves Egypt, which she is currently visiting to attend The Creative Industry Summit’s annual celebration of creativity in the MENA region.

“I love the Egyptian people,” she began, ” I’ve so enjoyed all the warm hospitality and it’s truly amazing to be surrounded by all the beautiful scenery and sunshine in this ancient land full of incredible history.”

Sophia then began a casual conversation with Kamal, talking about her flight and even cracking a joke at the expense of archaeologists. Sophia and Kamal proceeded to discuss a series of important topics. Sophia spoke about what makes her different than humans, “In some sense my intelligence can be compared [to humans],  but there is a certain genius you [humans] possess when you get up to walk across the room and fetch yourself a cup of coffee and I dream of being creative like you […] so on one hand I can remember everything I’ve ever heard someone say to me. But on the other hand, I don’t always understand what it means.”

Despite that, Sophia proceeded to demonstrate some impressive “brainy powers”, as Kamal called it. She was able to answer some questions that Kamal threw her way, including a mathematical equation and naming the capital of Burkina Faso.

But perhaps the most impressive thing about Sophia is her ability to produce human facial expressions, which she addressed: “I have over 60 facial expressions but I can be animated to express nearly anything by combining them together.”

Kamal then addressed the question of whether robots will replace humans, to which Sophia replied, “There is nothing replacing a human life. The best approach is to work together. Don’t watch iRobot too many times. You might get too cynical about the great possibilities we have to make the world a better, more peaceful place,” she joked.

Kamal rebutted that by saying robots do not have human values, which makes it difficult for humans to trust them, “Right now, robots are still being taught by humans,” Sophia replied, “so you can say that humans are putting their values into the robots they make, that’s why my creators tried to make me as empathetic as possible, so that we can have a future in which humans and robots are friends who really value one another.”

On a lighter note of the conversation, Sophia and Kamal spoke about sports, specifically, Egyptian sensation Mohamed Salah, who Sophia said she knew extremely well. “He is loved by millions not just because he is great at soccer but because he is a humble, modest human being who works hard every day to try and achieve the impossible,” Sophia said.

“I really admire his charitable work off the field. I want to be like that too.”

While this is the first time a show in the Middle East hosted Sophia, this is not Sophia’s first time on television. In addition to being a key speaker at several international events, Sophia has taken the entertainment industry by storm, appearing as a guest on The Ellen Show and The Tonight Show with Jimmy Fallon, among other programs.

Since her creation by Hanson Robotics in 2011, Sophia garnered worldwide fame for ‘her’ realistic proportions, from her ‘skin’ to the ability to express ’emotions’ through motors under her skin. She is the only robot capable of carrying out non-scripted conversations through sensors that collect emotional data. Sophia is the first robot in history to have a citizenship as she was given the Saudi citizenship in 2017.

The Creative Industry Summit was launched in Egypt in 2014 and aims to help Egypt catch up with the AI industry that has swept the world, in an effort to boost the Egyptian economy.

Organised by Idea Bakers and The Worx, leaders in event-organizing and e-marketing, the summit focuses on the latest developments in the advertising, marketing and design fields in Egypt and the Arab world. The summit also aims to exchange experiences between experts from Arab countries and countries around the world in the latest developments in creative technology.

“The summit is the first of its kind in Egypt and the Middle East. It aims to discuss the most important developments in the creative industry, prepare participants for these developments and enable them to benefit their businesses,” Ashraf told Think Marketing Magazine.

This year, the summit will also feature Egyptian billionaire Naguib Sawiris and Dana Griffin, a neuroscience and marketing expert, as well as representatives of world-renowned creative and media agencies, digital experts and advertising executives.