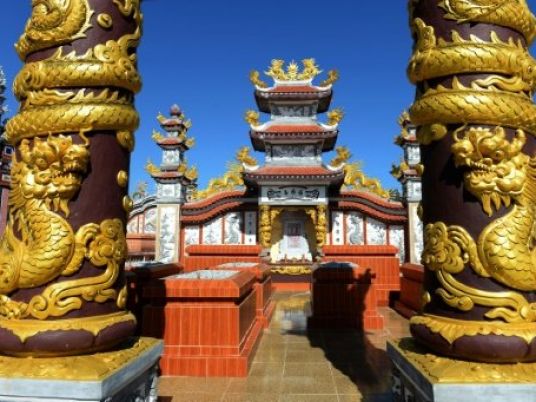 Just outside Vietnam's ancient imperial capital Hue is a tiny fishing town known as the City of Ghosts, where the dead live in more opulent style than the living.
The spectacular tombs of Vietnam's former emperors are a well-trodden stop on the tourist circuit in UNESCO-listed Hue, the country's capital for some 140 years starting in 1802.
But in nearby An Bang village, local fishermen are taking the tomb tradition into the 21st century.
Families in the rural community are pouring up to US$70,000 into elaborate final resting places for their kin — an astronomical cost in a country were the annual per capita income is $2,000.
Though Vietnam is officially an atheist state thanks to its communist rulers, the country has been deeply influenced by Confucius and Buddhist thought, and many people take ancestor worship seriously.
But the practice is being taken to new heights in An Bang.
"Our cemetery is unique," retired fisherman Dang Thien told AFP proudly as he gave reporters a tour of his family's enormous 400 square metre tomb.
"It is for the children to be able to pay their respects to the ancestors," he said, adding that a well-cared for tomb will also bring the family good fortune.
"It will be there forever."
Creativity unleashed
Thien's family plot was one of the first to be renovated in 1994, when locals first started investing heavily in the centuries-old cemetery.
Yet the ornate structure — six meters high and covered with colourful dragons carved into pillars — is now dwarfed by more recent additions.
Some new tombs in this 250 hectare site, set next to a white sand beach, rise up to 10 meters high, with every inch meticulously decorated.
Unlike nearby Hue, where UNESCO regulations are in place to preserve the 18th and 19th century buildings, locals in An Bang have been free to let their creativity run riot.
From Buddhist-style temples to Gothic tombs, with a hefty sprinkling of Roman-esque columns, the cemetery's aesthetic is: anything goes.
While traditional Vietnamese dragon carvings are popular, some graves also appear to draw inspiration from Hindu imagery, with others featuring Christian or Islamic symbols.
A few of the tombs stand empty — villagers have built them in advance of their own deaths, including one that was completed in 2005 and is waiting for its owner to shuffle off his mortal coil.
Money from overseas
According to local policeman Hoang Khang, the lavish graves are largely bankrolled by relatives of the villagers who live abroad, mostly in the United States.
"Being well-off, they send money back home, which is invested in building tombs, graves, and the village temple," he told AFP.
Hue lies close to the line that divided Vietnam's communist north and US-backed south during the country's bloody war, and the area was battered by bombs during the decades-long conflict.
In the years after the fall of Saigon and reunification in 1975, hundreds of thousands of people fled communist orthodoxy and grinding poverty in hopes of better lives overseas.
Many of the so-called boat people died at sea and others ended up in camps in Hong Kong. But some of the more fortunate found their way to Australia or the US.
In An Bang, an influx of foreign cash from such relatives has triggered something of a competitive tomb building spree, with families eager to build the most extravagant grave in the plot.
Policeman Khang said the tombs are getting taller, wider, and more ambitious every year.
"According to traditional customs, a taller tomb gives the ancestors a better view," he said.
As the cemetery has grown, it has become increasingly famous throughout Vietnam, putting the local communist leadership in a tough spot.
"Local authorities don't encourage giant tombs," said local official Hoang Dinh Xuan Thinh.
Authorities have run multiple "communication campaigns" to discourage locals from expanding the graves, but to no avail.
When AFP visited, construction work was ongoing on a two-story high tomb.
"Personally, I think it's a waste of money," said Thinh.