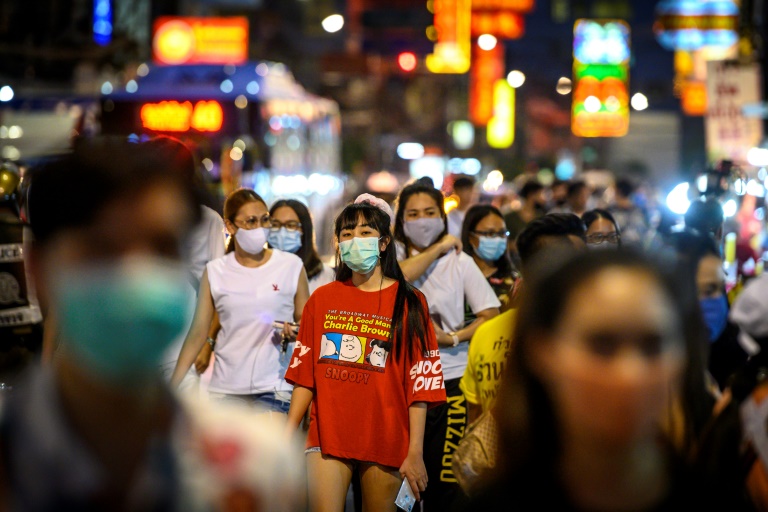 False alerts about a man shot dead at a coronavirus checkpoint, old footage of a supermarket stampede in reports of panic buying, and a 2015 video of a police raid on a brothel recirculated with a misleading claim.

A deluge of online misinformation and hoaxes during the coronavirus crisis is stoking fear and confusion across Asia, where violators of lockdown rules can face jail and hefty fines in some countries.

AFP has produced more than 150 lockdown-related misinformation reports across the region since February, when governments beyond China began introducing restrictions to curb the spread of COVID-19.

The hoaxes are created by a wide array of people with varying motives — from those looking to discredit governments and deepen religious divides, to pranksters — and then shared widely as fact.

In April, a hoax was shared on Facebook in the Philippines post its lockdown suggesting a motorcyclist had been shot dead for ignoring a virus checkpoint.

In fact, the footage — which was viewed tens of thousands of times in multiple posts — was of a police training drill.

Some users were outraged, and questioned the purportedly fatal use of force by the police, which has long been accused of human rights abuses and led President Rodrigo Duterte’s controversial war on drugs.

But others suggested the man had been “hard-headed” and was justly punished for stubbornly ignoring the checkpoint, echoing the types of sentiments from Duterte’s supporters who have cheered on the thousands of drug war deaths.

Other misinformation circulated in the Philippines has included doctored advisories about lockdown extensions and false posts about anti-government protesters flouting gathering bans.

Elsewhere in Asia, a Facebook post in Thailand included a video purporting to show panicked buyers scrambling for goods in Malaysia after it implemented a strict lockdown.

Thai Facebook users — who viewed the video hundreds of thousands of times — shared it with comments expressing worry there would be similar scenes in Thailand.

The clip, in fact, showed shoppers in Brazil on Black Friday, an annual day of sales, in November 2019.

“[Misinformation] has fueled a lot of uncertainty and anxiety among people,” said Yvonne Chua, an associate professor of journalism at the University of the Philippines.

The online mayhem has taken a greater hold when governments have communicated poorly, according to Axel Bruns, a media professor at the Queensland University of Technology in Australia.

“It seems to me the more effective government communication has been about lockdowns, but really about all aspects of their coronavirus response, the less foothold there has been for mis- and disinformation,” Bruns said.

In Thailand, where movement restrictions were imposed in March, anxiety spread over misleading messages saying people who did not wear face masks in public would be fined 200 Thai baht (US$6).

The misinformation quickly spread on Facebook, Twitter and the messaging app Line, and Thai police were forced to refute the claim in a press conference.

But less than a month later, however, some provinces did introduce much harsher fines for those who failed to wear face masks, further fueling confusion.

In Pakistan, where coronavirus restrictions were recently relaxed, one hoax video suggested shoppers had attempted to flee a store after police discovered it had ignored the lockdown.

But that video was actually of a police raid on a brothel in 2015.

Many Pakistani users pointed out that the clip was old, but not before it was viewed tens of thousands of times on Facebook, Twitter, YouTube and WhatsApp.

In neighboring India, misinformation has also been rife after a nationwide lockdown was imposed in March.

One graphic video of an axe attack was viewed tens of thousands of times in false posts on Facebook and Twitter, with claims it showed Islamist extremists killing a Hindu man during the lockdown.

In reality, the video showed an attack in Pakistan.

While some social media users identified the clip as from abroad, others appeared misled by it, suggesting it was evidence that India needed “army rule”.

Bruns said the deluge of misinformation was partly due to governments’ inabilities to adequately reassure their citizens.

“The circulation of misinformation is increased during such times because people are desperately looking for answers to their questions about what’s happening, why, and what they can do to protect themselves,” said Bruns.

“And if they can’t find enough satisfactory answers from official sources, they’ll start to look elsewhere.”

Image: AFP has produced more than 150 lockdown-related misinformation reports across the region since February, when governments beyond China began introducing restrictions to curb the spread of COVID-19. (AFP / Mladen ANTONOV)

WHO launches mobile app to combat misinformation about COVID-19