The resignation of the recently-appointed prosecutor general and Tuesday's marches against the constitution referendum occupy the headlines of most government and independent newspapers Thursday.

Independent Al-Shorouk newspaper has Prosecutor General Talaat Abdallah asserting he will not retract his resignation, which he offered Monday in response to anger from the judiciary. Minister of Justice Ahmed Mekky claims Abdallah has been planning to resign for a while because he believes his own appointment was illegal. President Mohamed Morsy removed the nation's chief prosecutor Abdel Meguid Mahmoud last month and put Abdallah in his place, a move judges and prosecutors said the executive branch does not have the authority to make.

Former Judges Club President Zakaria Abdel Aziz says members of the public prosecution have diluted the potency of the judicial system, according to the paper. He also noted that a forced resignation would not be valid.

State-run Al-Ahram leads with candidates for a new prosecutor general, saying the Supreme Judicial Council is planning to hold an emergency meeting Sunday to discuss Abdallah's resignation. The paper quotes a judicial source as saying the council is expected to accept the resignation and submit the names of three new candidates for the post to the president.

Until a decision is reached, the prosecutor general continues his work amid heightened security measures following protests outside his office, the paper reports.

Judges Club head Ahmed al-Zend allegedly expressed his gratitude to the prosecutor general and announced that the club would hold a ceremony to honor him at the club. In a seemingly strange statement, given public outcry from judges over the whole prosecutor general debacle, Zend reportedly claimed he would be willing to submit Abdallah's name as a candidate for the same post he is vacating.

The statements Al-Ahram attributes to Zend come after prosecutors' offices and the Judges Club had organized a protest Monday against Abdallah's alleged interference into investigations regarding the presidential palace protests.

The mouthpiece of the Muslim Brotherhood, Freedom and Justice newspaper, runs the mysterious headline, "The backstage of the prosecutor general's resignation." In the story that follows, the Muslim Brotherhood denounces what it says is Abdallah's forced resignation and calls upon the Interior Ministry to respond to judges who "attacked" his offices.

Protesters again gathered outside the presidential palace in Heliopolis Tuesday, this time calling for the constitution referendum to be cancelled. The second half of the referendum vote is scheduled to take place Saturday.

Al-Ahram reports that five marches converged on Tahrir Square downtown, where clashes erupted among protesters, resulting in three injuries. One march reportedly went from the palace to the high elections commission to reject the results of the first day of referendum voting on 15 December, during which a majority of voters approved the draft constitution. The voting process, however, has been marred by reports of irregularities.

Freedom and Justice dubs Tuesday’s protests "The recognition of failure march." The paper says Islamists are calling for their own march Friday in Alexandria for the "protection of mosques and scholars." The calls are a response to an alleged attack on Sheikh Ahmed al-Mahalawy in the city's Al-Qaed Ibrahim Mosque following Friday prayers, during which the sheikh called on worshippers to vote "yes" for the constitution. 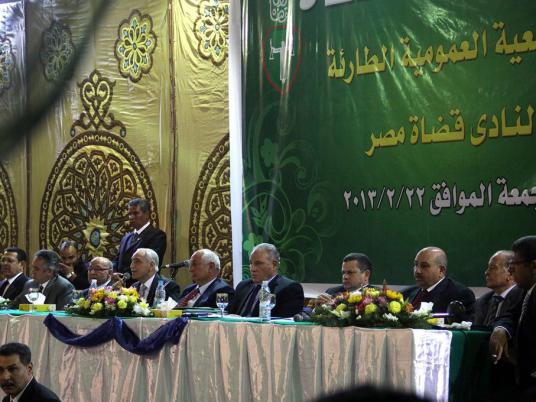