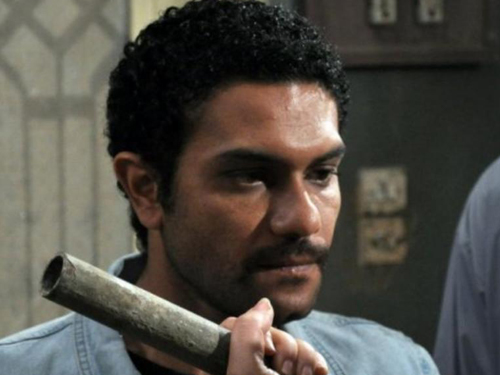 “What do you mean by thug, exactly?” was the first question on Gamal Saber’s mind when I asked him what he thought of the thugs being portrayed in many of the Ramadan TV series this season.

Saber is from one of the shantytown neighborhoods popularly thought of to produce “thugs,” Ezbet Abu Qarn in Old Cairo. But to him, besides being an offensive term, “thug” is used in too loose and vague a manner to resonate with him and the people from this area.

One of the main themes in the annual Ramadan heave of television series is thugs. This year, out of more than 50 new series, at least 10 deal with thugs.

The word became more popular since clashes between protesters and hired thugs during the revolution, and after the recent increase in petty crime.

In fact, one of the heavily viewed series, called simply “The Thug” was directly inspired by the 2 February 2011 events called the “Battle of the Camel,” when thugs attacked the Tahrir Square sit-in on camels and horseback.

“When I saw the Battle of the Camel, the title of this series just came to me,” said the series’ screenwriter, Osama Nour Eddin. The writer said the series, however, is a pure work of fiction.

Some parts of it do resonate, however, with Saber. He and his neighborhood are very similar to the main character and setting of the “The Thug.”

Like Youssef, the main character played well by Aser Yasin in “The Thug,” Saber works with an area businessman who offered protection to police and helped rig elections for the National Democratic Party before the revolution. They’re both paid hands who do what they’re told.

In the opening scene of the “The Thug,” Youssef’s patron, al-Daba’, played by Samy al-Adl, negotiates with a corrupt politician over how much it costs to guarantee the votes of people in his area. Eventually a few episodes in, Daba’ agrees with the politician on a price and commissions Youssef and the rest of the men to go on bribing the impoverished inhabitants of his area to vote against “the beards.”

The subsequent election scenes in “The Thug” are all too familiar to Saber, who has been involved in almost the same exact scenarios in the 2000, 2005 and 2010 real parliamentary elections. He can also relate to something Youssef says early on in the series — “whatever my boss tells me to do, I do.”

But Saber, and many like him, do not follow the same dramatized stereotype of a thug as shown in the series. They weren’t all street kids bound to their bosses who took them in, fed and sheltered them. It’s not all reduced to an Egyptian slum version of the Stockholm Syndrome, as it appears to be in, “the Thug.”

“The problem with television is that they don’t realize it’s not all that complicated. The majority of the young kids they call thugs wouldn’t be doing what they’re doing if they just had jobs and a system that treated them like human beings,” he said.

This year’s portrayals of thugs do attempt to dig a little deeper into the character and psyche of thugs. In “The Thug,” Youssef is as kind to his neighbors as he is brutal to his foes. Individual characters have more background and range. However, the plots are still mired with logical inconsistencies and stereotypes, showing that the producers and directors are willing to dig deeper into existing archetypes but not create entirely new ones.

On the highest level, thugs were and still are the police who run a lot of the crime in the country and force people to pay them bribes and kickbacks, holding everyone hostage. Then there are the big-time businessmen and drug dealers who do the same, they have people who do dirty work for them, fix elections, etc. Then the lowest and most insignificant form of thugs is the young boys who go around sticking people up and doing petty crime.

Some of the series, such as “The Bats” and “Red Lines,” look into police corruption and how it creates thugs, which to Saber is a welcome expansion of the meaning of thugs in popular media.

Still, for Saber — who would never accept being called a thug — there is a very fine line between what would make a person a thug by society’s standards and what would keep him in its good graces.

“Thugs portrayed on TV can also be shown to be normal people,” he said. “The ones that do bad deserve to be punished, but television needs to get that people are sometimes made out to be thugs and could have just easily been teachers or doctors.”