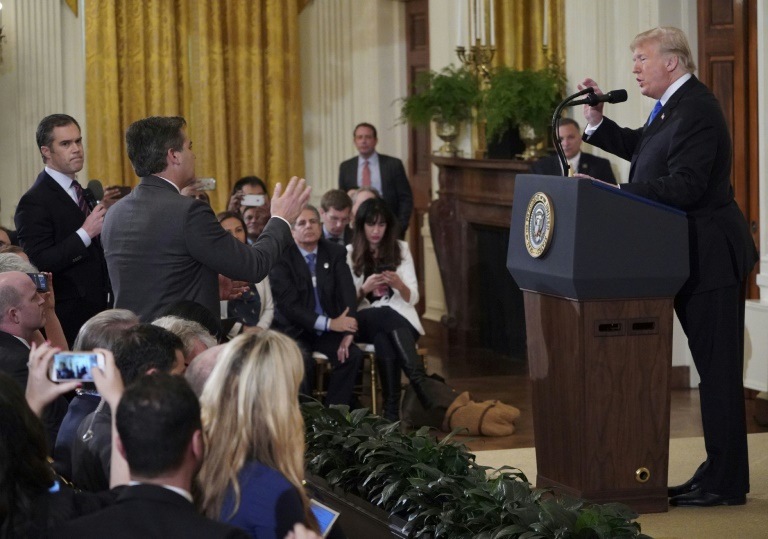 The White House on Wednesday suspended the press pass of a CNN reporter who sparred with Donald Trump at a news conference, during which the president branded him the “enemy of the people.”

A visibly angry Trump called reporter Jim Acosta a “rude, terrible person,” after the CNN White House correspondent refused the president’s orders to sit down and yield the microphone during the conference one day after the US midterm election.

“The White House is suspending the hard pass of the reporter involved until further notice,” said White House spokeswoman Sarah Sanders hours later, referring to Acosta, who then tweeted that he had been denied White House entry.

The heated exchange began after Acosta clung to the microphone and persisted with questions about the president’s repeated and angry denunciation of a caravan of poor Central American migrants making their way through Mexico to the US border. He asked Trump why he has characterized it as an invasion.

Trump said “that’s enough!” and a White House intern tried in vain to take the microphone from the CNN journalist.

“President Trump believes in a free press and expects and welcomes tough questions of him and his Administration,” Sanders said in her statement.

“We will, however, never tolerate a reporter placing his hands on a young woman just trying to do her job as a White House intern. This conduct is absolutely unacceptable,” she said.

Acosta shot back at the accusation of misconduct, tweeting “this is a lie” — as his network and a number of Washington journalists who had been at the press conference voiced support for him and denied the White House allegations that he touched the intern.

“Secretary Sanders lied,” CNN said in a statement, saying the press pass suspension was “done in retaliation for challenging questions.”

Sanders “provided fraudulent accusations and cited an incident that never happened,” the US cable network said.

“This unprecedented decision is a threat to our democracy and the country deserves better. Jim Acosta has our full support.”

An association representing the Washington press corps urged the White House to immediately reverse “this weak and misguided action.”

“The White House Correspondents’ Association strongly objects to the Trump Administration’s decision to use US Secret Service security credentials as a tool to punish a reporter with whom it has a difficult relationship,” the group said. “Revoking access to the White House complex is a reaction out of line to the purported offense and is unacceptable.”

In a later tweet, Sanders said the White House stood by its decision. “We will not tolerate the inappropriate behavior clearly documented in this video,” she wrote.

It was the latest in a long history of fiery run-ins between the mercurial Republican leader and Acosta.

At the conference Trump, when asked if he had “demonized immigrants” during the midterms campaign, replied: “No, I want them to come into the country. But they have to come in legally.”

Acosta persisted, saying: “They are hundreds of miles away. That is not an invasion.”

At that point, the president snapped.

“Honestly, I think you should let me run the country. You run CNN, and if you did it well, your ratings would be higher,” Trump said.

As the reporter continued, Trump declared: “That’s enough, put down the mic” and walked away from his own podium, as if leaving.

The intern attempted to take the microphone from Acosta, who persisted and tried to shout out one last question.

Waving his finger, Trump berated him.

“I’ll tell you what. CNN should be ashamed of itself having you working for them. You are a rude, terrible person. You shouldn’t be working for CNN,” he said.

When NBC reporter Peter Alexander took the mic for the next question, he defended Acosta as a “diligent reporter” — earning Trump’s ire.

Looking back at Acosta, who again rose up in his own defense, Trump added: “When you report fake news, which CNN does a lot, you are the enemy of the people.”

In response, CNN said “this president’s ongoing attacks on the press have gone too far,” in a statement.

“They are not only dangerous, they are disturbingly un-American.”