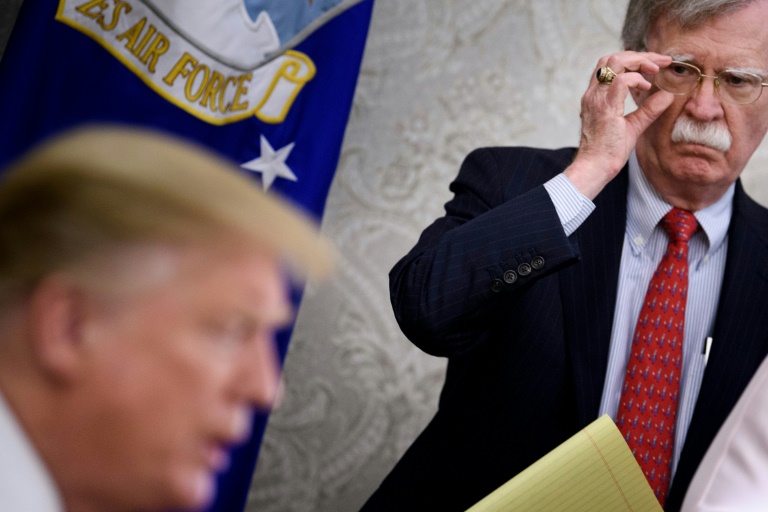 Trump lashed out at Bolton on Twitter, saying his former aide was coming out with potentially damaging allegations in an upcoming “nasty & untrue book” because he was fired from his White House position.

Bolton reportedly claims in the book that Trump told him military aid to Ukraine was tied to Kiev investigating his political rival Joe Biden – the charge at the heart of the two articles of impeachment approved on December 18 by the Democratic-controlled House of Representatives.

The fight over Bolton’s testimony intensified as the senators who will decide Trump’s fate began directly questioning Democratic prosecutors and White House lawyers.

Taking turns by party, senators spent 10 hours submitting written questions, which were then read aloud to the chamber by Supreme Court Chief Justice John Roberts, who is presiding over just the third impeachment trial of a president in US history.

The 100 members of the Senate will return at 1:00 pm (1800 GMT) on Thursday to pose further questions to the White House defense lawyers and the seven House prosecutors seeking Trump’s removal from office for abuse of power and obstruction of Congress.

Senate Democratic Minority Leader Chuck Schumer said it may be an “uphill fight” to garner enough Republican support to issue a subpoena to Bolton, who has said he is ready to testify.

Republicans hold a 53 to 47 seat edge in the Senate and four Republicans would need to side with the Democrats to compel Bolton to appear.

Trump called on Republicans to reject a push for witnesses when the issue comes up for a vote on Friday and blasted Bolton, whom he fired in September.

“Frankly, if I listened to him, we would be in World War Six by now,” Trump said. “(He) goes out and IMMEDIATELY writes a nasty & untrue book. All Classified National Security. Who would do this?”

‘Don’t wait for the book’

Echoing the views of many of his Republican colleagues, Senator John Barrasso of Wyoming came out against further witnesses and urged an early end to the trial.

“America has heard enough,” Barrasso said. “A majority of Americans are saying this is a waste of time because they know the president is not going to be removed.”

Opinion polls on whether Trump should be removed are actually evenly divided but a two-thirds majority – 67 senators – is needed to convict the president and Trump is virtually assured of being acquitted.

“Don’t wait for the book,” the California lawmaker told the senators sitting as trial jurors. “This case is overwhelmingly clear without John Bolton but if you have any question about it you can erase all doubt.”

White House deputy counsel Patrick Philbin countered that the House had not subpoenaed Bolton and his appearance would present “grave security issues.”

“He has all of the nation’s secrets,” Philbin said.

The White House, he added, would seek to prevent Bolton’s testimony and the matter would end up in a lengthy legal battle in the courts.

“This institution will be effectively paralyzed for months on end,” he said.

One of Trump’s lawyers, Harvard professor emeritus Alan Dershowitz, advanced an argument that Trump’s actions were not impeachable because the president believed his re-election was in the public interest.

Schiff dismissed Dershowitz’ argument, saying it boils down to believing a president is above the law.

Warning that these were “extraordinarily dangerous times,” Dershowitz also said American voters should decide Trump’s fate in the November election.

“For a president of the United States to be removed today, it would pose existential dangers to our ability to live together as a people,” he said. “The decision would not be accepted by many Americans.”

Schiff pushed back. “If you say you can’t hold a president accountable in an election year where they are trying to cheat in that election then you are giving them carte blanche,” he said.

The National Security Council said meanwhile that a preliminary review of Bolton’s book had found that it contained “significant amounts of classified information” and cannot be published in its current form.

Before the explosive revelations about what Bolton knew, the White House had assumed the trial could be wrapped up with no witnesses and an acquittal by this weekend, in time for Trump’s annual “State of the Union” address before Congress on Tuesday, February 4.

Trump to fire up base with anti-abortion rally speech