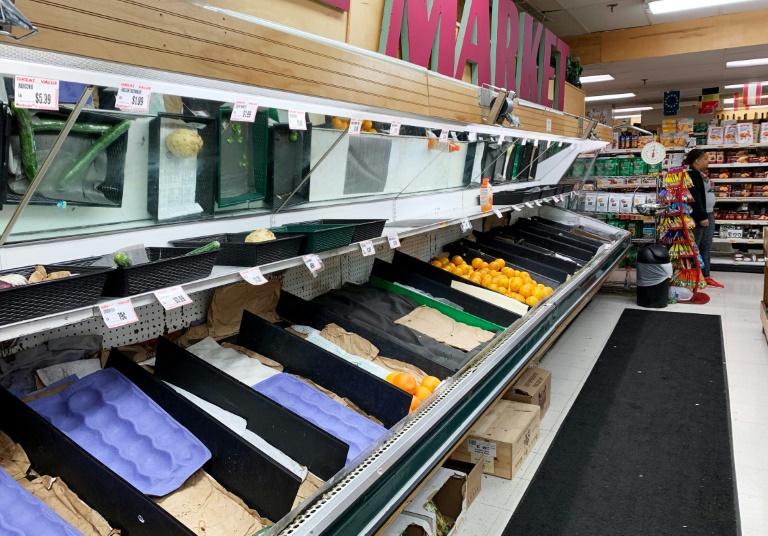 Food has been quickly disappearing from US supermarket shelves in signs of panic-buying but President Donald Trump and other government and industry officials assured on Sunday that the supply chain is intact and there’s plenty of food.

“You don’t have to buy so much… Relax,” Trump said at a press conference of his new-coronavirus task force, after speaking with CEOs of major US supermarkets and food companies such as Walmart and Costco.

“We have no shortages, other than people are buying anywhere from three to five times what they would normally buy,” Trump said.

“There’s no need for anybody in the country to hoard essential food supplies.”

Trump’s economic advisor Larry Kudlow, asked in an earlier CBS interview about empty grocery store shelves, said he had “read about some situations where this is a difficulty, but most of our supply lines are working pretty well in the domestic United States.”

Could he guarantee people that they will be able to stay home and feed themselves?

“Well, I’m going to say ‘yes’, knowing there may be some exceptions to this,” Kudlow replied.

He said the country faces “a huge economic challenge” but “most of America is still working… Factories are not shutting down across the country, at least not yet.”

The country’s biggest retailers, dairy farmers and meat producers confirmed that the food supply chain remains intact and has ramped up to meet stockpiling prompted by the new coronavirus pandemic, The New York Times reported.

“There is plenty of food in the country,” the Times quoted Julie Anna Potts, chief executive of the North American Meat Institute, as saying.

Image: AFP / MANDEL NGAN The fresh produce section of a supermarket in Washington is mostly empty after panic buying, but President Donald Trump and other officials, including in the food industry, assured there is plenty of supply

Stocking up and staying in: New Yorkers adapt to coronavirus