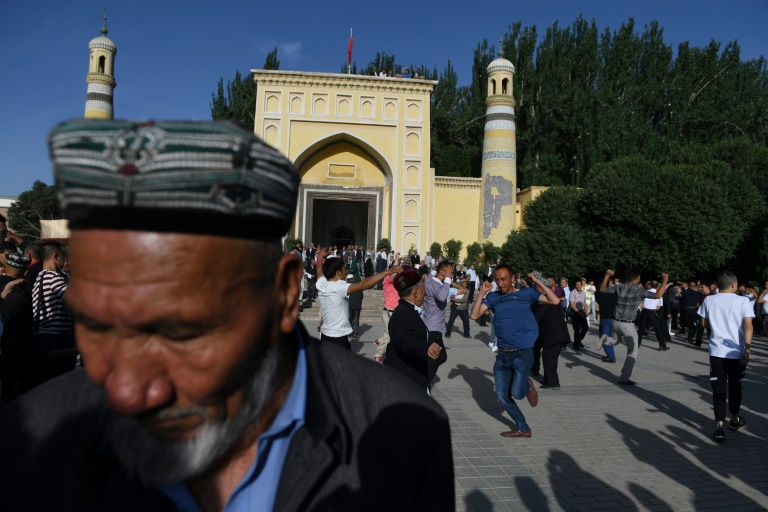 The corner where Heyitkah Mosque in China’s restive Xinjiang region once hummed with life is now a concrete parking lot where all traces of the tall, domed building have been erased.

While Muslims around the world celebrated the end of Ramadan with prayers and festivities this week, the recent destruction of dozens of mosques in Xinjiang highlights the increasing pressure Uighurs and other ethnic minorities face in the heavily policed region.

Behind the lot in the city of Hotan, the slogan “Educate the people for the party” is emblazoned in red on the wall of a primary school where students must scan their faces upon entering the razor-wired gates.

The mosque “was beautiful,” recalled a vendor at a nearby bazaar. “There were a lot of people there.”

Satellite images reviewed by AFP and visual analysis non-profit Earthrise Alliance show that 36 mosques and religious sites have been torn down or had their domes and corner spires removed since 2017.

In the mosques that are open, worshipers go through metal detectors while surveillance cameras monitor them inside.

“The situation here is very strict, it takes a toll on my heart,” said one Uighur, who requested anonymity for fear of reprisals.

In the ancient Silk Road city of Kashgar, no longer does the sunrise prayer call echo throughout the city — a ritual the manager of the city’s central mosque once proudly shared with tourists.

On Wednesday, locals celebrating Eid al-Fitr quietly filed into the entrance of state-approved Idkah Mosque -– one of the largest in China — as police and officials fenced off the wide square surrounding the building and plainclothes men monitored every person’s actions.

It was another low-key Ramadan for Muslims in Xinjiang, with restaurants busy serving food to customers throughout the day, when practicing Muslims fast.

In Hotan on Friday –- a holy day for believers -– the only mosque in the city was empty after sundown, an important prayer session when Muslim families typically break their daily fast.

Earlier in the day, at least 100 people attended a midday session but the vast majority were elderly men.

The ruling Communist Party “sees religion as this existential threat,” said James Leibold, an expert on ethnic relations and policy in China at La Trobe University.

Over the long term, the Chinese government wants to achieve “the secularization of Chinese society,” he told AFP.

The Xinjiang government told AFP that it “protects religious freedoms” and citizens can celebrate Ramadan “within the scope permitted by law”, without elaborating.

The authorities have thrown a high-tech security net across the region, installing cameras, mobile police stations and checkpoints in seemingly every street in response to a spate of deadly attacks blamed on Islamic extremists and separatists in recent years.

An estimated one million Uighurs and other Turkic-speaking ethnic groups are held in a vast network of internment camps.

In those centers, it was a different Ramadan.

The Xinjiang government told AFP that people in the centers are not allowed to hold religious activities because Chinese law forbids it within education facilities, but they are free to do so “when they return home on weekends”.

In recent years, Chinese authorities have ramped up controls on public displays of religion and Islamic traditions in Xinjiang.

AFP reporters did not see any veiled women and few men sporting long beards during a week-long visit to the region. Former internment camp inmates have said they were incarcerated for these outward signs of their religion.

Places of worship too have become targets of Beijing’s draconian security measures.

In the satellite images analyzed by AFP and Earthrise Alliance, 30 religious sites were completely demolished while six had their domes and corner spires removed.

AFP reporters visited about half a dozen sites, and found that some mosques had been repurposed into public spaces.

Police officers blocked journalists from entering Artux, just north of Kashgar, where the town’s grand mosque and dozens of other community mosques were destroyed.

The area is some 22 kilometers (14 miles) away from an enormous complex believed to be a re-education center. Visible from a nearby village, the facility has razor-wired walls, watchtowers and imposing block buildings.

In Kashgar, two cameras perched on the columns of a former mosque point at its entrance. There is no minaret or dome — instead, a shop selling dresses lies to its right alongside dwellings.

A demolished mosque in Hotan has been converted into a garden, paved with concrete walkways and sparsely planted trees.

On the outskirts of town, situated between a cemetery and sand dunes, two white flags and a pile of burned refuse and debris was all that was left of an old shrine named Imam Asim.

“The Chinese government just wants to erase everything… that is different from Han Chinese, everything which belongs to Uighur culture or Islamic culture in the region,” he said.

Juma Maimaiti, the official imam of Idkah Mosque, told AFP in an interview arranged by the propaganda department that the demolition of mosques “has never happened here.”

“But our government has proceeded to protect some key mosques,” he added, and said that the city of Kashgar has over 150 mosques.

Though Beijing’s restrictions on religious piety, such as fasting, are not new, observers say conditions have deteriorated to the point where celebrations for the holy month in Xinjiang are reduced or largely invisible.

Islamic greetings and openly fasting in public are no longer permitted, said Darren Byler, a lecturer at the University of Washington who focuses on Uighur culture.

While there are Uighurs who continue to practise their faith, they are “internalising it at this moment — they’re not expressing it openly,” he said.

At state-backed mosques, religious activity is controlled as Beijing pursues a five-year plan to “Sinicise” Islam as the “only way for a healthy development of Islam” in the country, said Yang Faming, president of the state-backed Islamic Association of China, in January.

Propaganda signs with slogans such as “love the Party, love the country” hang at many mosques.

In Yengisar county, south of Kashgar, one mosque hung a photo of Chinese President Xi Jinping inside its premises, where most posters were dedicated to warning against religious extremism and promoting ethnic harmony.

“Unity and stability is a blessing,” read a red banner draped across the wall. “Division and turmoil is a disaster.”

Xinjiang crackdown at the heart of China's Belt and Road