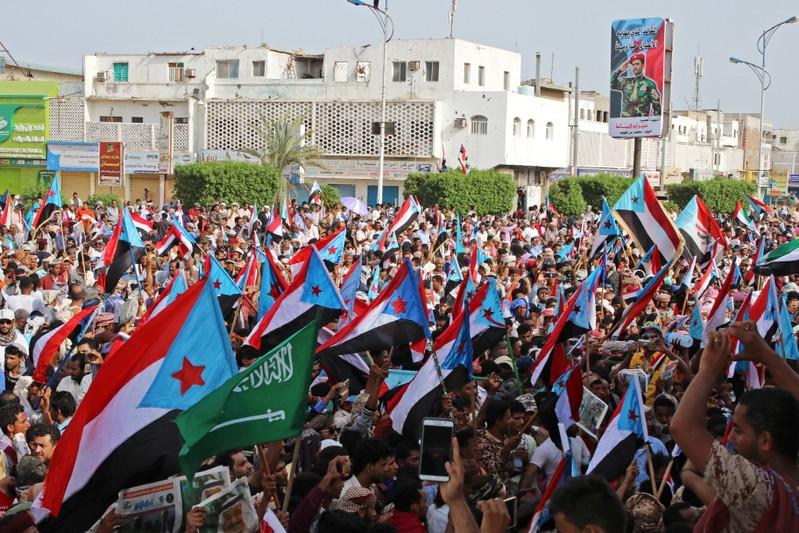 ADEN, Yemen (Reuters) – Yemen’s southern separatists said on Thursday they were ready to attend a summit in Saudi Arabia to resolve a standoff in Aden after they seized the southern port, seat of Yemen’s Saudi-backed government.

The takeover by the United Arab Emirates-backed separatist forces exposed cracks in the Saudi-led military coalition that has been battling the Iran-aligned Houthi group for more than four years and complicated United Nations efforts to end the war.

“We thank Saudi Arabia for its earnest efforts to contain the crisis and invite the parties for talks in Jeddah,” the Southern Transitional Council (STC) said in a statement. “The meeting will be held as soon as necessary arrangements are completed.”

The separatists are a major component of the alliance that intervened in Yemen in March 2015 against the Houthis after they ousted the government of President Abd-Rabbu Mansour Hadi from power in the capital Sanaa in late 2014. The government rebased in Aden, while Hadi remains in Riyadh.

The war has revived old strains between north and south Yemen, formerly separate countries that united into a single state in 1990.

An STC spokesman told Reuters on Wednesday they would not cede control unless the Islamist Islah party, a backbone of Hadi’s government, and northerners were removed from positions of power in the south.

STC forces took government bases after accusing the Islah party allied to Hadi of being complicit in a Houthi missile attack on southern forces earlier this month, a charge the party denies.

A local official told Reuters that the forces had moved away from the nearly empty presidential palace and central bank. There was no sign they had quit the military camps.

The STC statement outlined its plans for governance in Aden, including “moving all military units to bases outside the city with the exception of public security and support troops.”

Hadi’s government has said it would not participate in the summit unless STC forces reverse their “coup” and called on the UAE to stop backing them.

Analysts say Riyadh and Abu Dhabi differ over how to move forward in Yemen. The UAE, the kingdom’s main military ally on the ground for most of the war, in June scaled down its military presence under pressure from Western allies to end the conflict.

It still supports some 90,000 Yemeni forces made up of southern separatists and coastal plain fighters.

The UAE echoed a Saudi call for dialogue, but did not ask southern forces it funds and arms to cede control. It regards Islah as an offshoot of the Muslim Brotherhood while Riyadh tolerates the party because it shores up Hadi.

“There is no daylight between the UAE and Saudi Arabia when it comes to Yemen. We are completely aligned,” a UAE official said in a statement.

“We remain deeply concerned over the situation in Aden, and the coalition’s engagement on-the-ground is evolving with the aim of establishing conditions for stability, security and peace,” the official added.

Tens of thousands of Yemenis attended a rally in Aden on Thursday, asking the international community and the Western-backed Arab alliance to recognized southerners’ contribution to the coalition and right to rule.

Many arrived from other southern provinces. One man held up a battered old identity document from former South Yemen. Many waved the South Yemen flag.

A rally statement, issued by civil society groups and unions, accused Hadi’s government of mismanagement, saying it had become “a guillotine at Yemenis’ necks.”

The U.N. is working to reduce tensions throughout Yemen to pave the way for negotiations to end the war that has killed tens of thousands and pushed the poorest Arabian Peninsula nation to the brink of famine.

The conflict is largely seen in the region as a proxy war between Saudi Arabia and Tehran. The Houthis say their revolution is against corruption.

The Houthis, who control Sanaa and most big urban centers, say Aden proves that Hadi cannot be a serious partner in any negotiations.

“Anyone who does not respect the multitudes in the north and south who reject Hadi and his followers must be sick and deranged,” Houthi Deputy Foreign Minister Hussein al-Azzi tweeted.