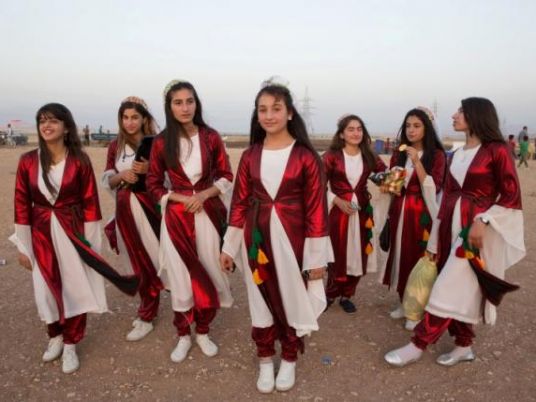 Belting out an emotional

song in honor of Kurdish military forces under a full moon, Syrian refugee Mizzgin Rumi's shyness transformed to confidence as he captivated his audience.

Rumi, 19, was one of 10 acts on stage at the dusty Arbat refugee camp in the semi-autonomous northern region of Iraqi Kurdistan competing in the highly-anticipated final of the talent contest "Refugees Got Talent".

Surrounded by a band of professional musicians, Rumi's singing dazzled hundreds of refugees, all of whom have fled the war in Syria, and he took the lead in the competition at Arbat where families live in rows of cinder brick homes.

The show, run along the lines of British music impresario Simon Cowell's global franchise "Got Talent", was organized by the United Nation's refugee agency UNHCR to mark World Refugee Day on Monday and was a major highlight for many in the camp.

Rumi was stunned to be the favorite of the four judges, prompting a rare display of cheers and celebration among the more than 7,500 Syrian refugees housed at the sprawling camp.

From the war-torn city of Kobane in northern Syria, Rumi and his family have been living at Arbat for two years. Only his brother stayed behind, choosing to fight instead of fleeing.

"When we left we thought we'd be coming back," an exuberant Rumi, dressed in a smart white shirt, told the Thomson Reuters Foundation.

UNHCR representative to Iraq, Bruno Geddo, said the talent contest was an opportunity for refugees to unite for a night with the sounds of traditional Kurdish music, pop ballads, and Hindi rhythms echoing across the dark, warm evening.

He said World Refugee Day wanted to highlight the plight but also the resilience of the 20 million people globally living as refugees, with many youngsters in those ranks.

An estimated nine million Syrians have fled their homes since the outbreak of civil war in March 2011, with over three million fleeing to neighboring countries and some 240,000 finding refuge in the neighboring Kurdish region of Iraq.

The UNHCR estimates there are nearly 8,000 Syrian children and youth living in Sulaymaniyah and most do not attend school.

For while some primary education is provided for children up to ninth grade, it is hard for youngsters to get places in secondary schools and universities mainly because their families to not have enough money to pay for fees, supplies or transport.

Being locked out of education leaves many young people bored in the camp and "Refugees Got Talent" was devised as a way to showcase their skills, ranging from singing to dancing to break dancing.

"[This contest] keeps them focused on something positive. We witnessed the electricity and the joy in the eyes of the youth," said Geddo.

"It was enormously empowering. We saw last night the tremendous talent and energy of young Syrian refugees. We want to help them unleash their potential."

In second place came the quirky Hindi dance ensemble ABCD — Anybody Can Dance — with five teenage refugee girls led by 17-year-old Rojbin Baroodo, dressed in jeans and a T-shirt.

"Dance is my life," said a jubilant Baroodo who relocated to Iraq's Kurdish region two years ago after fleeing the Syrian city of Hassakeh with her family.

"Hindi music is not popular in Syria, but when I started doing this [dancing and teaching] it became popular," she said in flawless English with an accent that gave away her love of Bollywood films.

"I want to be a dancer but my family says I cannot because I am a girl. It was difficult to tell them about my dancing — they said this is the last time [I can dance] then I will dance [only] at home."

ABCD member and friend Amal Mohammad nodded in agreement, recounting her parents' reaction to her passion for dance.

"At first my parents said it was shameful — but if we keep dancing I believe people will imitate us and it will become more normal," said Mohammad.

As committed as ABCD to their Hindi routine, so was 17-year-old Wasila Hassan to her Kurdish dance, coming in third place with her dance group Rojava.

"We dance all day long, almost every day. When I dance I forget the world, I just want to keep dancing," said the teenager, adamant that through dance she could introduce Syrian culture to the world.

Amal Sleman, a member of the Khalat dance troupe, said the talent show had been a real boost in the camp.

"I like that all of my friends can gather together and find a moment to be happy," she said.