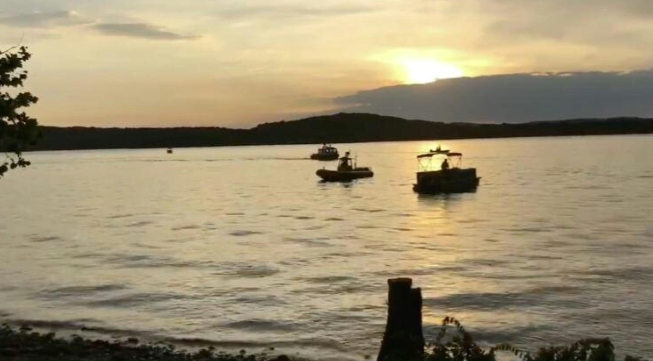 A tourist boat capsized and sank in a sudden storm on a lake in Missouri, leaving at least 13 people dead, as authorities search for three others still missing.

Stone County Sheriff Doug Rader said 31 people had been aboard the amphibious vessel, known as a duck boat for its wheels that allow it to ride on land in addition to floating low on the water.

Divers were scouring the lake for survivors and bodies following the accident overnight on Table Rock Lake, officials said. Several of the dead were children.

Rader told journalists that some of the passengers managed to reach shore after the boat capsized and began to sink.

Seven people have been hospitalized, he said, and a local hospital said two were in critical condition.

Rader said the incident was caused by heavy winds and the tour boat had been making its way to land when it capsized.

Two duck boats had been on the water at the time, according to Rader, one of which returned safely.

The man-made lake where the boat sank is a popular tourist draw located in southern Missouri near the city of Branson, on the border with Arkansas.

Rick Kettels, who owns the Lakeside Resort on the shores of Table Rock Lake, said the storm appeared to come out of nowhere.

“I’ve been here most of my life and I never saw a storm this bad,” he said, adding that he had not seen a warning from local weather stations.

When the storm seemed imminent he had rushed to the lake to urge guests and boats to evacuate, as rough waves began slamming into his resort pier.

Steve Lindenberg, a meteorologist in Springfield, Missouri, some 45 miles (72 kilometers) north of Branson, told AFP a string of severe thunderstorms had barreled through the area causing significant tree damage and downed power lines.

Meteorologists clocked winds at 74 miles per hour (119 kilometers per hour) and issued a warning to the area at approximately 6:30 pm.

“Our hearts are heavy tonight,” the City of Branson said in a statement. “This is a very trying time for all those who are involved.

“The City of Branson may be small in size but it is big at its heart.”

“My deepest sympathies to the families and friends of those involved in the terrible boat accident which just took place in Missouri. Such a tragedy, such a great loss. May God be with you all!” he said.

Branson’s City Hall was open to victims, family members and survivors, with support from the Red Cross as well as city officials.

The National Transportation Safety Board was to send a team early Friday to investigate the incident, the agency said.

Branson, Missouri, is a vacation destination popular for its theaters and country music, including singer Dolly Parton’s Civil War-themed attraction.

The company Ripley Entertainment owns the capsized boat, having added the “Ride the Ducks” attraction to its roster last year.

“Ride the Ducks” is a seasonal tour through the area’s famed Ozarks region.

Ripley Entertainment spokeswoman Suzanne Smagala-Potts said in a statement the company would “do all we can to assist the families who were involved and the authorities as they continue with the search and rescue.”

The incident in Missouri was part of a storm system that struck much of the Midwest late Thursday, according to meteorologists.

Several tornadoes tore through the state of Iowa just north of Missouri, causing injuries as well as damage to a number of buildings. No fatalities were reported there.