CAIRO (AP) — When Sudan’s protest leaders signed a preliminary power-sharing agreement with the ruling military council in early July, they had no choice but to shake hands with the man many of them accuse of ordering a massacre just a month earlier.

Gen. Mohammed Hamdan Dagalo, a paramilitary commander from Darfur who is widely known as Hemedti, has emerged as Sudan’s main power broker in the months since the military overthrew President Omar al-Bashir.

He boasts tens of thousands of paramilitary forces who have spent years battling insurgents across Sudan as well as rebels in Yemen on behalf of Saudi Arabia and the United Arab Emirates. Experts say he can draw on his family’s vast livestock and gold mining operations in Darfur, as well as funding from Gulf Arab countries, to buy the support of tribal leaders and other local elites. That could be the recipe for a new patronage system like the one that kept al-Bashir in power for three decades. 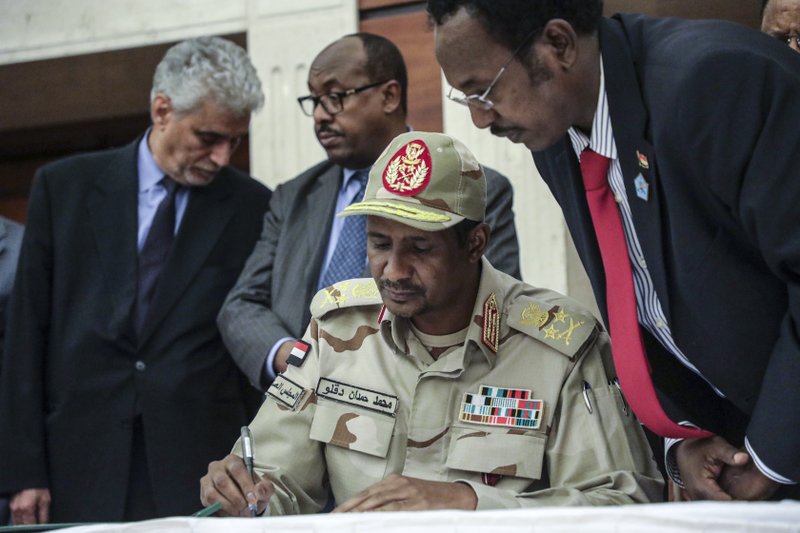 But he also faces considerable headwinds: from the pro-democracy movement that has brought tens of thousands into the streets; from rival tribes and rebel groups that have battled his forces; and from elites in Khartoum, who view the onetime camel trader from distant Darfur as an outsider.

This week the protesters and the military announced a new breakthrough in their efforts to form a joint government that would pave the way to civilian rule. But the democratic transition remains fragile, and Hemedti’s rise — along with the growing resistance to it — could plunge the country into further chaos.

Hemedti leads the Rapid Support Forces, which grew out of the feared Janjaweed militias mobilized to put down a rebellion in Darfur in the early 2000s. The International Criminal Court, which charged al-Bashir and other top officials with genocide and crimes against humanity, has not brought charges against Hemedti. But rights groups say his forces burned villages and raped and killed civilians during a series of counterinsurgency campaigns over the last decade. 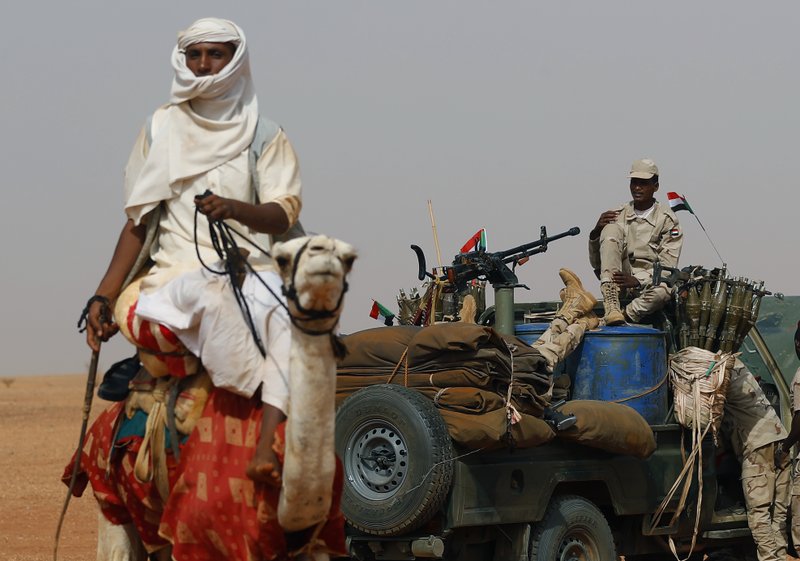 Sudanese Gen. Mohammed Hamdan Dagalo sits on his vehicle surrounded by soldiers from the Rapid Support Forces during a military-backed tribal rally in the East Nile province in June. (AP Photo/Hussein Malla, File)

Spokesmen for the military and the RSF did not respond to multiple requests for comment on Hemedti’s past actions or present ambitions.

His forces have won a number of military victories against both rebels and rival Arab tribes, allowing his family to expand its livestock business and branch into the mining of gold, which emerged as Sudan’s biggest export after the secession of oil-rich South Sudan in 2011. He can also count on financial aid from Saudi Arabia and the UAE, which have contracted his forces to battle Iran-aligned rebels in Yemen.

There are few if any publicly available figures for the wealth at the disposal of Hemedti and the RSF. But in recent months he has boasted of depositing $1 billion in the Central Bank and paying the salaries of teachers and police.

“There are all the signs of someone who is trying to be the next military dictator of Sudan,” said Suliman Baldo, a senior researcher with the Enough Project. But he doubts Hemedti can sustain a patronage system like the one that kept al-Bashir in power.

In the months since al-Bashir’s ouster, Hemedti has worked out of an office in the presidential residence, receiving foreign envoys and other officials. But in the capital he is still seen as an outsider. 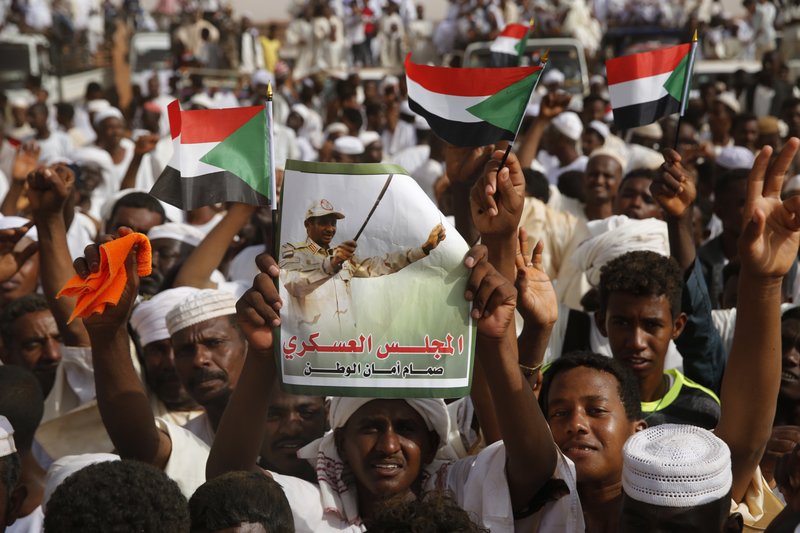 A Sudanese supporter of Gen. Mohammed Hamdan Dagalo, the deputy head of the military council, holds ups a photo of the general, widely known as Hemedti during a rally in June. (AP Photo/Hussein Malla, File)

“The Khartoum elites are unanimous that Hemedti cannot be the ruler of Sudan, because as an uneducated Darfurian he is from the wrong class and the wrong place, and lacks the formal qualifications of education or staff college,” said Alex de Waal, a Sudan expert at Tufts University.

The protesters blame the RSF for the clearing of their main sit-in outside the military headquarters in Khartoum on June 3, when security forces killed scores of people. Sudanese prosecutors have charged eight RSF officers, including a major general, with crimes against humanity but say the ruling generals did not order the crackdown.

Some protest leaders have called for the RSF to be disbanded, and both the Sudanese Professionals’ Association, which spearheaded the protests against al-Bashir, and the Communist Party have said Hemedti should be tried for alleged crimes in Darfur.

In the end, however, under international pressure , the protesters returned to talks with the military over a power-sharing deal. The two sides signed a preliminary document last month. While Hemedti is technically the deputy head of the military council, it was he who attended the signing ceremony. 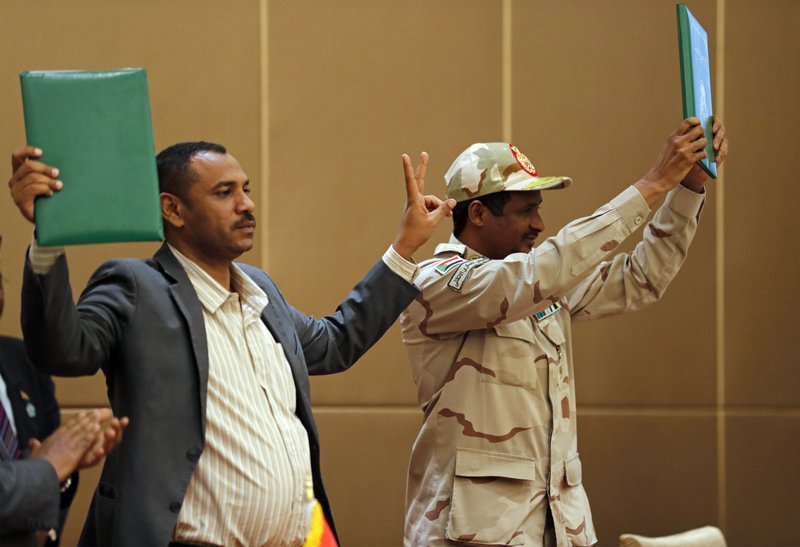 Gen.Dagalo and Sudanese protest leader Ahmad Rabie hold up a signed power-sharing agreement at a ceremony this week in the capital of Khartoum. (AP Photo, File)

The follow-up constitutional document signed Sunday would place the RSF under the command of the military. The protesters said it would also allow for the prosecution of military or civilian leaders if there is evidence of involvement in violence against protesters. Hemedti hailed the deal as a “win-win.”

RESISTANCE IN THE PROVINCES

Another route to power for Hemedti could run through the provinces, where neglect and marginalization by the central government have spawned rebellions going back decades.

“The most intriguing possibility today is that Hemedti will cash in on his credentials as a man of the far periphery, and build a support base that includes making agreements with the armed groups,” de Waal said. He says Hemedti knows the price of loyalty from personal experience, and that the RSF can more readily integrate the armed groups. 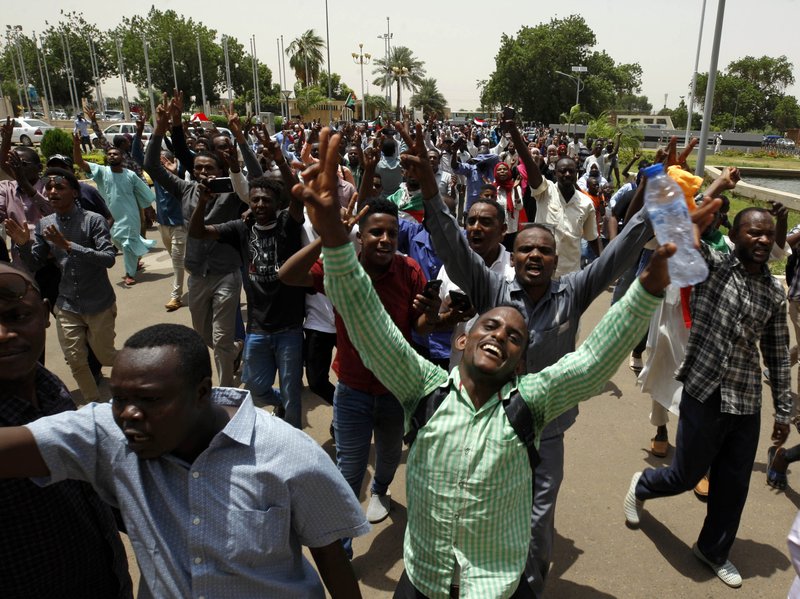 Sudanese celebrate following the signing of a power-sharing agreement between the military and the pro-democracy movement in the capital, Khartoum. (AP Photo, File)

An activist from Hemedti’s Rizeigat tribe confirmed that he has paid “lots of money to tribal leaders” and provided jobs and other services to buy their loyalty.

“The opposition against him is silent because they fear the crackdown,” he said, speaking on condition of anonymity for fear of reprisal.

Hemedti has also met with the leaders of various rebel groups — including those he has fought against — in Chad, South Sudan and the United Arab Emirates. But experts say he may still have too many enemies from his past campaigns.

Jerome Tubiana, another Sudan researcher, said Hemedti has “already failed to secure a strong base in the center, and his bet to represent all the peripheries, or even the whole Darfur, will be uneasy given his violent past.”

“In Darfur, he has victims by the millions and I don’t think they will rally behind him,” he said.

By JOSEPH KRAUSS and SAMY MAGDY

In this June 15, 2019 file photo, Gen. Mohammed Hamdan Dagalo, the deputy head of the military council, salutes during a rally, in Galawee, northern Sudan. Dagalo, a paramilitary commander from Darfur widely known as Hemedti, has emerged as Sudan’s main power broker in the months since the military overthrew President Omar al-Bashir. As the military and protest leaders work to hash out a final agreement on the country’s future, Hemedti’s rise, and the growing resistance to it, could plunge the country into further chaos. (AP Photo, File)