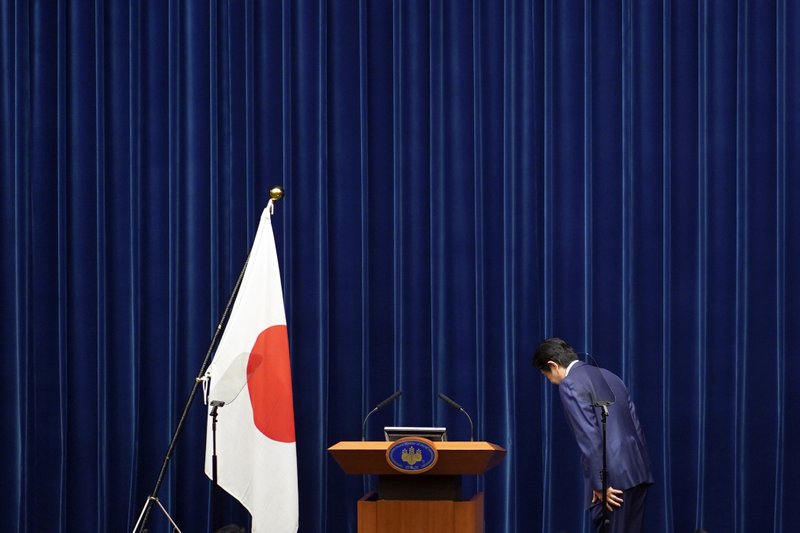 TOKYO (AP) — Japanese Prime Minister Shinzo Abe might be the biggest loser if the Tokyo Olympics don’t go off as planned in just over four months.

Abe has attached himself to the success of the Olympics since pushing hard for Tokyo’s selection at an IOC meeting in 2013 in Buenos Aires, Argentina. Tokyo was picked over Istanbul by billing itself as a “safe pair of hands.”

It was also Abe who charmed the closing ceremony of the 2016 Rio de Janeiro Olympics, parading before a 70,000 sellout as Nintendo game character Super Mario.

Abe hopes to use the Tokyo Olympics as the capstone of his career as Japan’s longest-serving prime minister. But the games are in doubt, even though Japanese organizers and the International Olympic Committee have repeatedly said they are going ahead on July 24 — as planned.

But the possibility of the first Olympic cancellation outside of wartime — or a postponement — is real in the face of the fast-spreading virus that the World Health Organization has declared a pandemic. The virus, of course, has clobbered the economy, another bad sign for Abe.

“He (Abe) must certainly be worried that he might not be in charge if the Olympics were delayed for a year,” David Leheny, a political scientist at Tokyo’s Waseda University, said in an interview with The Associated Press. “He really has invested a lot in the idea of showing Japan to the world in the best possible light, and he’s extraordinarily reluctant to give that up.”

Leheny speculated that Abe’s tenure would be unlikely to survive a cancellation or postponement. He has been embroiled in corruption scandals and blamed for his slow reaction to the virus outbreak. Although, his popularity increased about 8 percentage points to 49.7 percent in a telephone poll released this week by Japanese news agency Kyodo.

“I think he’s still clinging to the hope that the epidemic is going to pass as quickly as it came on,” Leheny said.

There are signs it may not, and more questions about the safety of bringing hundreds of thousands of athletes and fans together in Tokyo.

“Who would want to be prime minister during the Olympics that nobody attends because of a global pandemic,” Leheny added.

The IOC this week asked its staff at headquarters in Lausanne, Switzerland, to work from home until further notice. It also closed the Olympic Museum. In addition, the staff for the Olympic Broadcasting Service in Madrid is being asked to work from home. The IOC said staff members have not reported any coronavirus cases.

An Irish bookmaker is offering odds of 1-4 that the games will not open on July 24.

A small reception is planned Friday when the Olympic flame arrives from Greece at an airbase in northern Japan. The torch relay will start officially in Fukushima prefecture as planned on March 26 with severe limits on crowd size.

“The IOC has repeatedly faced serious challenges in the final road map into the games,” Michael Payne, the IOC’s marketing director for 20 years, told AP. “Experience has also reinforced in the IOC that you don’t jump the gun, no matter the media or political pressure.”

Payne said there was no reason to decide now with the Olympics still four months away.

“As serious as it is, the final decision is only going to get taken much, much closer to the games because the situation then may be very different from what it is today,” said Payne, who still consults for the IOC.

The IOC holds most of the leverage over any decision to cancel or postpone, which is spelled out in the Host City Contract signed in 2013 with the city of Tokyo and the Japanese Olympic Committee.

At stake are billions in broadcast and sponsorship deals. Tokyo organizers additionally say they’re officially spending $12.6 billion to hold the Olympics, although a national audit board says it’s twice that much.

John Coates, the IOC member who heads the inspection team for Tokyo, told The Australian newspaper there was more concern back in 1980 about a boycott of the Moscow Olympics.

“There is less uncertainty than we had in 1980, I can tell you that,” Coates told the newspaper.

In an exclusive interview last month with AP, former IOC vice president Dick Pound speculated the Olympic governing body would have to announce a decision by the end of May. Pound suggested cancellation was the most realistic option.

Others have suggested postponement as a likely option if the IOC can reach a financial deal with broadcasters, sponsors, sports federations, athletes, and 200 national Olympic committees. Most have long-term relationships with the IOC and an incentive to go along.

Holding an Olympics in empty venues has also been suggested.

“Postponing the games is, I fear, the only option if the government, under advice from the WHO and others, comes to the conclusion that the risk of hosting with spectators is too great,” high-profile sports marketing expert Patrick Nally told AP.

Nally and Payne were key figures in driving IOC sponsorships.

Nally dismissed the no-spectator option because of the event would lack “atmosphere.” A no-fans option would also cost local organizers about $1 billion in ticket sales, and many would have been tickets sold to sponsors who pass them on to customers — a valuable perk.

“Participants will find the event hollow and quality performances will be severely impacted,” Nally said. “My view, therefore, is a games without public is an impossible and unrealistic proposal.”

By STEPHEN WADE and MARI YAMAGUCHI

Image: FILE – In this March 14, 2020, file photo, Japanese Prime Minister Shinzo Abe bows to toward a Japanese flag before delivering his speech at the Prime Minister’s office in Tokyo. Prime Minister Abe might be the biggest loser if the Tokyo Olympics don’t go off as planned in just over four months. Abe has attached himself to the success of the Olympics since pushing hard for Tokyo’s selection at an IOC meeting in 2013 in Buenos Aires, Argentina. Tokyo was picked over Istanbul by billing itself as a “safe pair of hands.” (AP Photo/Eugene Hoshiko, File)

Tokyo 1940: The Games that became the 'Missing Olympics'