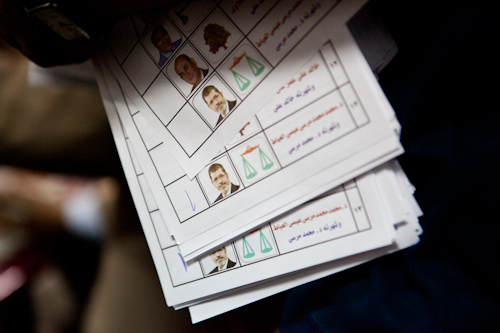 The campaigns to boycott the presidential election and invalidate ballots may have been given a boost following the verdicts of the Supreme Constitutional Court (SCC) on Thursday, activists say.

The SCC verdicts, which dissolved the recently-elected lower house of Parliament and kept former regime candidate Ahmed Shafiq in the presidential race, have raised doubts about the country’s electoral politics altogether.

In light of the SCC verdicts, “Voters will likely grow alienated with the voting process. I don’t regret the dissolution of Parliament. But the so-called ‘Parliament of the Revolution’ was the only democratically-elected governmental authority in the country,” said Bahaa Awwad, a political activist and head consultant at the National Cancer Institute. According to Awwad, who intends on nullifying his ballot, “After all this squandering of money and time, people will likely become more disillusioned with the electoral process.”

Several weeks prior to the SCC verdicts, groups of activists have been organizing an electoral boycott campaign known as Muqate’oon (Boycotters), while others have been organizing a ballot invalidation campaign known as Mubteloon (Nullifiers). Among many other things, the campaigns object to holding the election under the rule of the Supreme Council of the Armed Forces.

The Muqate’oon Campaign intends to refrain from voting to withdraw legitimacy from the election, whereas the Mubteloon Campaign plans to invalidate their ballots by crossing out the names of both Shafiq and the Muslim Brotherhood’s Mohamed Morsy, the two runoff candidates. Many nullifiers would also express themselves by writing their opinions of the election on their ballots.

“Muqate’oon and Mubteloon are complimentary campaigns,” said Ghada Shahbender, an election monitor and member of the board of directors at the Egyptian Organization for Human Rights.

Shahbender, who is a chief organizer behind the Mubteloon campaign, explained that both the boycott and nullification campaigns are organized around the expression of dissent against rigged elections, ballot-buying and other electoral violations.

“We object to the violations perpetrated during the election, and to the far-reaching powers granted to the Presidential Elections Commission (PEC). We also object against the fact that the PEC is withholding the voter database from the public, claiming that such information is confidential,” she said.

Shahbender pointed out that there are systematic irregularities in the voter database, including deceased voters who are still registered and the possible inclusion of hundreds of thousands of police and military personnel, although members of these forces are strictly forbidden from voting.

“We don’t know who is authorized to vote from who isn’t authorized. We demand that this database be purged of invalid voters, updated, and made public,” said Shahbender. “We demand an electoral process which is transparent; if it becomes a transparent process then more people will be willing to participate in elections.”

The Mubteloon Campaign describes their ballot nullifications as being “an active boycott” or “a dissenting vote.”

“Both campaigns have their merits. Certain voters would prefer to express their dissent by nullifying their votes, rather than boycotting and staying at home,” Shahbender said.

“Nullifying my vote is my way of expressing dissent toward the political process,” Awwad explained. “The problem with boycotting is that the Egyptian people have been boycotting the electoral process for the past 30 years, if not longer. Yet since the revolution, the people have grown interested in voting and partaking in elections.”

“Even if they have grown disillusioned with the electoral process following the SCC verdicts, we should encourage them to participate and to express their dissent through ballot nullifications,” he continued.

“Even during the first round [of the presidential election on 23 and 24  May] there was a very significant number of nullifiers who invalidated their ballots. There were around 400,000 invalid votes the first time around, and during the second round [16 and 17 June] we hope and expect 2 million nullifications.”

Shahbender has a more ambitious goal of reaching 10 million nullifications during the second round. She hopes that the number of nullifications will equal, or surpass, the number of valid votes, sending a message that millions of voters are standing up against electoral violations.

Shahbender pointed out that Mubteloon has a hotline for text messages, which serves as a database “for nullifiers, their numbers and distribution according to their respective governorates, cities and towns. We also hope to build a core base for future opposition.”

When asked if vote nullification could contribute to a higher turnout that the election organizers will pride themselves for, Shahbender said that it all depends on a transparent announcement of results, including invalid ballots.

“The nullification of votes counts as participation in the election, and it does raise the overall voter turnout rate. However, judges must still announce the number of valid votes versus invalid votes.”

Awwad explained that because Mubteloon’s presence at polling stations may give the wrong impression that they are voting for one of the two candidates, “We have decided to wear stickers on our clothes, or Mubteloon T-shirts, clarifying that we are here to nullify our votes. This way the media cannot portray us as being conventional voters who are queuing-up to vote for Shafiq or Morsy.”

“We will also engage in discussions regarding our nullifications with the voters standing in the queues,” he added.

The Mubteloon Campaign has not agreed upon a unified message of dissent to write on the ballots; only to cross off both names on the ballot. Some nullifiers have said that they will write the name of the martyr Khaled Saeed who was tortured to death by police officers in 2010, while others plan to write, “Down with military rule,” among other dissenting messages.

The slogan of the Mubteloon Campaign is, “Nullify your ballots and depose their legitimacy.” For weeks, this campaign has immersed itself in online awareness-raising, and has produced stickers, banners and posters calling on voters to invalidate their ballots with their personalized messages of dissent.

Iman Darwish, a women’s rights activist, said that she would nullify her ballot with the words, “Military rulers are scum, judges are scum, and the Brotherhood are scum.” Darwish believes that, “Many people will take to the polling stations once again. Many of these people are still looking forward to a strongman-ruler who will chase after them with a whip in his hand.”

Not everyone agrees with Mubteloon.

Ahmed Murad, an engineering student, said that he will participate in the election regardless of the SCC rulings. “The whole point of elections is to vote for the best candidate. Going to the polls and nullifying your ballot doesn’t make sense to me. You should either vote properly or stay at home.”

Others charge nullifiers and boycotters alike of not providing alternative propositions to electoral politics.

As for Maged Mohsen, a young electrician, he is not sure yet whether he will vote and who he will vote for. “I don’t understand the court’s ruling. How many times are we supposed to vote for our representatives?” he asked.

“The situation is so confusing these days. Nobody really knows what’s happening, or where this country is going. May God guide us, Egypt, through these difficult times.”