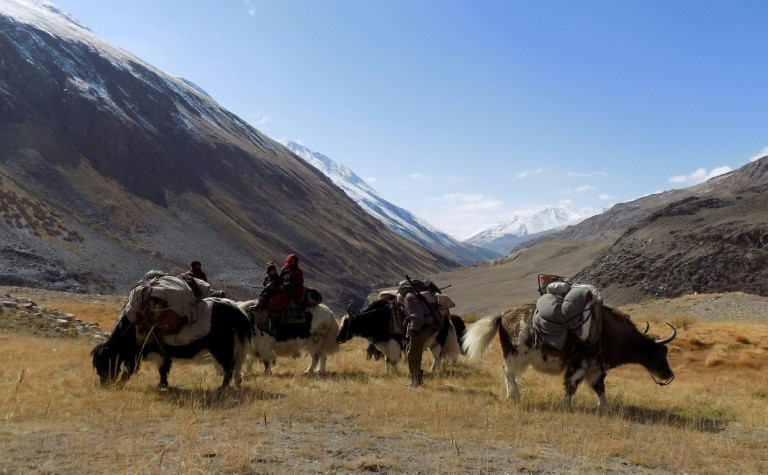 For centuries, the nomadic Kyrgyz people travelled freely across Central and South Asia, fording rivers and cutting across snow-capped mountains with their herds of livestock. Today they are stuck on the “roof of the world” — caught in Afghanistan’s remote and mountainous Wakhan Corridor with little hope of a way out.

Political upheaval and violence in the region has slowly boxed them in. There are no roads, and one by one the nearest borders have closed, condemning the Kyrgyz to a treacherous life.

“We are accidental Afghans,” says Jo Boi, the frail Kyrgyz chief with heavy-lidded eyes and a somnolent voice.

“We didn’t choose this land but we have no other place to go,” he explains of his tribe, which numbers just 1,100 according to analysts.

One in three women die from complications in childbirth while 53 percent of children do not survive beyond age five, says Jeff Walkes, the Bishek-based director of NGO Crosslink Development International.

He told AFP: “They live on a precipice between survival and succumbing to the realities of living in such a remote area.”

“They continue to exist… as they have for hundreds of years,” he added,

In the absence of doctors or clinics even minor ailments can be deadly.

“Death is more frequent than birth,” agrees local shepherd Tilo, his hands so chapped the skin is cracked and bloodied, a common feature among inhabitants of the corridor.

The Wakhan Corridor consists mainly of arid valleys and craggy mountain passes. It was carved out as result of the 19th century Great Game, when the British and Russian Empires fought for influence in Central Asia — the long, narrow strip of territory serving as a buffer zone between the expanding powers.

Its inhabitants, the Kyrgyz and the larger Wakhi tribe at the other end of the corridor, call their land Bam-e-Dunya, the “roof of the world”, due to its location at the convergence of three of Asia’s highest mountain ranges — the Hindu Kush, the Karakoram and the Pamir, together forming the famed Pamir Knot.

The nearest town of Ishkashim is a three-day journey by horse or yak on a trail that cuts through sharp mountain passes and narrow valleys, where one wrong step can be deadly.

Previously the Kyrgyz only stopped in Wakhan for the summer, says Kate Clark of the Afghanistan Anaysts Network (AAN), travelling to Kyrgyzstan, Tajikistan, and the Xinjiang region of China to escape the harsh winters.

“After the 1917 Russian and 1949 Communist revolutions, many fled to Wakhan preferring the numbing cold to communist-enforced collectivisation,” she told AFP.

The independence of British India and creation of Pakistan in 1947 hardened another boundary to the south, and by the mid-20th century the group was cut off in the northern portion of the corridor.

A communist coup in Kabul in 1978 spurred them to flee, led by their leader Haji Rehman Qul over the 16,300-foot Irshad pass into Pakistan.

But after several hundred died due to water-borne diseases, most of the group returned to Wakhan.

Following the disastrous exodus, Rehman begged the US government to resettle the group in “yak friendly” Alaska, but their requests were denied by Washington.

A small group of Kyrgyz was later given aslyum in Turkey, but the rest still battle for survival in Wakhan.

The Afghan government considers the Kyrgyz citizens, but the group view it as a foreign land and have been lobbying to be relocated to Kyrgyzstan since the USSR collapsed.

Their resettlement is not seen as a burning problem in Kyrgyzstan. Successive governments have announced initiatives over the years to assist repatriation and provide citizenship for some 22,000 ethnic Kyrgyz abroad, including the group in the Wakhan Corridor, but securing such a move remains rare.

“Finally the government of Kyrgyzstan has started repatriation and some families moved this year,” says Jo Boi.

The Kyrgyzstan embassy in Kabul, however, denied any efforts to repatriate the community, insisting that the small number taken to Kyrgyzstan were sent for educational purposes only.

“The ethnic Kyrgyz are citizens of Afghanistan,” Uchkun Eraliev, chargé d’affaires at the Kyrgyzstan Embassy in Afghanistan told AFP, adding that his government simply provides humanitarian assistance including food, warm clothes and medicine to them annually.

But for Tilo, securing a future in Kyrgyzstan is his peoples’ best hope for survival.

“Who would like to live here, but there is no other way… We never become old because we die young,” he says with a bitter smile.