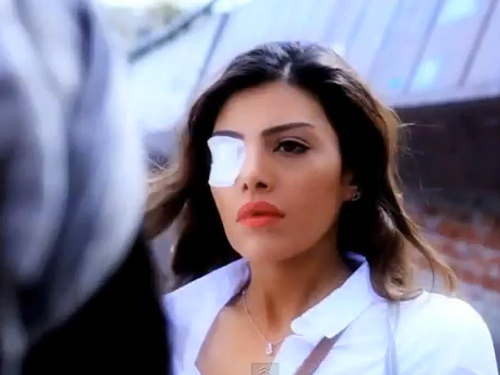 ALEXANDRIA — In “After the Flood,” the only Egyptian film competing in the 28th Alexandria Film Festival, an Egyptian brought up in the UK comes to Egypt just after Hosni Mubarak’s ouster to study the psychology of corruption. She focuses on one of the figures of the old regime, a Rafik al-Tayeb (presumably a stand in for former Interior Minister Habib al-Adly).

Arriving in Alexandria, the pretty protagonist gets into a taxi. “Is downtown far from here?” she asks. The taxi driver, beaming because of the revolution, replies, “Everything is close now.” Looking out the cab window, Yasmin (Hanan Motawea) says into her smartphone: “Before, everything was pale, but everything is distinct now. It’s as if they were dead and came back to life.”

Yasmin finds out that Tayeb’s childhood in a poor neighborhood was terrible because his dad made him steal and didn’t want him to go to school, while his mom dressed immodestly. In a correctional facility he is raped by an authority figure and kills seven people by injecting them with air. The reason Yasmin’s research is so dramatically important is because when published and read by the Egyptian people, it will make the rulers rule better, thus leading to the creation of a “logical” and “ethical” regime “the way it’s happening all over the world.”

Unfortunately, just before she gets to interview Tayeb himself — which for some reason is crucial — he is killed in prison, and the film abruptly ends with Yasmin screaming “This research will be completed!” to the sound of dramatic, sentimental music.

Dramatic, sentimental music plays an important role in the film. If you can imagine syrupy pop strings that sound like elevator music with an emotive twist, you can grasp the whole approach of the film without having to watch it. Whenever a character starts saying something important, or starts thinking, or typing, or when things go a bit quiet, dramatic sentimental music plays. The only music that departs from this somewhat is during the obligatory belly-dancing scene, and when a song about how Alexandria is not just the corniche plays over a montage of shots of the Alexandria corniche, as Yasmin falls in love with Karim (Ahmed Azmy).

The dialogue is made up of preachy clichés and cringe-worthy attempts to sound “street.” “We should care for each other and stand by each other after the revolution!” says Karim to someone who has just tried to stab his friend.

There are some moments of drama. When Yasmin goes to a dodgy area of town to talk to someone who used to know Tayeb, she panics and hyperventilates and Karim calms her down. He leads her along by the hand to the sound of dramatic sentimental music before he inexplicably gets stabbed by a local.

At one point, Yasmin goes to speak to Tayeb’s sister who throws her out of the house with a long angry speech. Yasmin sits on the doorstep for a minute while, again, dramatic sentimental music plays. This makes the sister change her mind and she reveals everything she knows.

The film’s cinematography has two looks: filtered and color corrected into a sort of soft-focus glow, like a television ad for sofas, or home-movie style, complete with clumsy editing and abrupt close-ups where the person holding the camera pressed too hard on the zoom button. Perhaps the worst moments of the film visually are the little, arbitrary moments of slow motion, like when we see Karim for the first time.

In 2008, “After the Flood” writer and director Hazem Metwalli made another film, called “A Very Long Day,” that sank without a trace. Accounts from the time indicate that it was full of overlong confessional monologues, naïve social criticism, scantily-clad women, and self-indulgent characters. It seems that Metwalli has stuck to this formula, but added the revolution, using shaky footage of Tahrir Square celebrating Mubarak’s resignation before the opening credits to play on the audience’s heart strings.

But it is hard to tell if the movie is actually with or against the revolution. In a key scene near the end, a uniformed drunk approaches the revolutionary group in a bar with a long sob-story about how, after doing really well in college, he had joined the riot police because he didn’t want to get involved in corruption. He had resigned because of the revolution and become an alcoholic. This “pure” tragic character sums up the film’s ambivalence toward the revolution — from its wide-eyed enthusiasm at the start to Yasmin blaming traffic chaos and thuggery on the revolution rather than any other elements that might be at play. Tellingly, the gratuitous eye-patch comes off near the end of the film to reveal a perfectly healed and perfectly made-up eye. Despite the constant platitudes that are presented as profound revolutionary truths, every detail of the film seems fake.